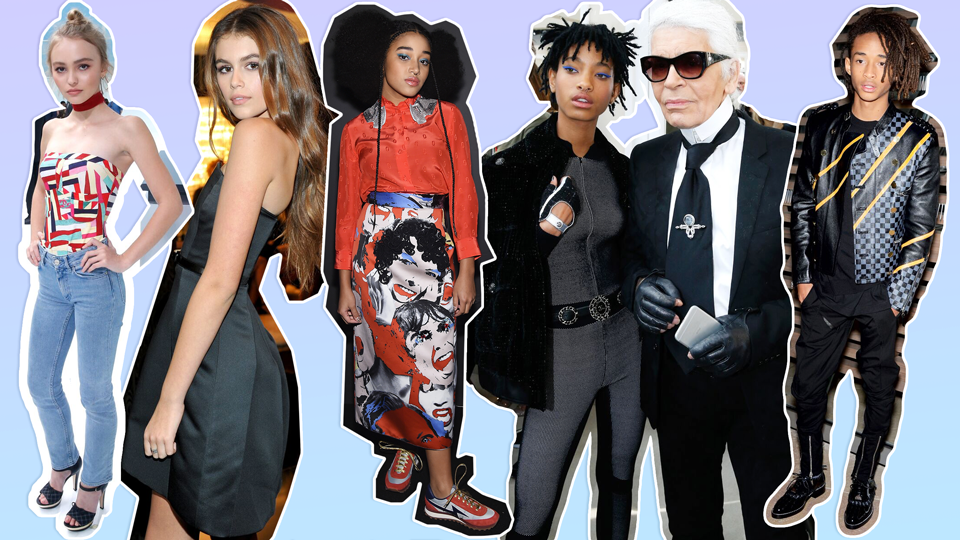 If you pick up a magazine these days, you might notice a peculiar phenomenon: They’re looking an awful lot like high-school yearbooks—albeit incredibly cool ones. Flip through, say, the April issue of W and you’ll find Willow Smith, Kiernan Shipka, and Zendaya on the cover—ages 15, 16, and 19, respectively.

The fashion world, it seems, is tired of millennials. Bring on Generation Z.

Now, it’s not like luxury brands’ obsession with youth is a new story—fashion has made muses of school-age stars since time immemorial. But the recent batch of partnerships stands out both for its prevalence and for who these teens are: not nameless, voiceless underage models, but the offspring of A-list celebrities, or else actors and singers themselves with followers and fame—the Instagram generation.

Last year, women their grandmothers’ age ruled the pages of magazines, with then-80-year-old Joan Didion modeling sunglasses for Céline, septuagenarian Joni Mitchell strumming her guitar in Saint Laurent, and “geriatric starlet” Iris Apfel fronting campaigns for both Alexis Bittar and Kate Spade New York. Now, the pendulum has swung the other way—but why? 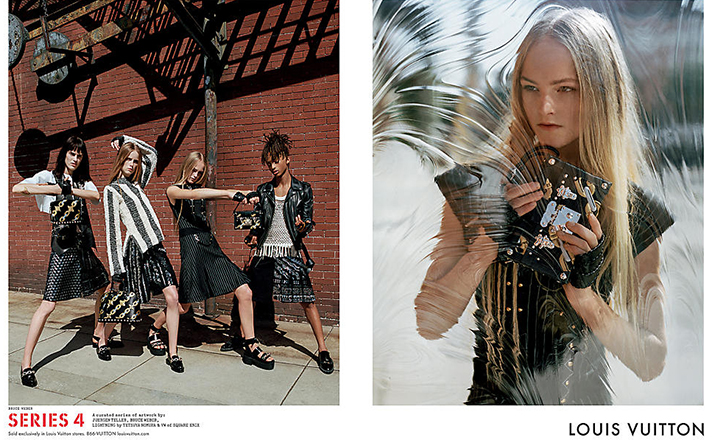 According to casting director Angus Munro, who’s worked on campaigns for Kenzo and Calvin Klein and casts i-D magazine’s famously energetic and of-the-moment covers, the pace of fashion has sped up to such breakneck speeds that brands have to fight to stay ahead of their competition in terms of casting the freshest, most surprising face. (And, naturally, the one that’s going to generate the most engagement on social media.)

“I think that there’s an element, honestly, of people vaguely grasping at straws, trying to find something new,” says Munro, who himself is currently negotiating with Willow and Jaden for a cover of Italian Vogue. “I can’t fathom why we all independently seem to come to the same point. It’s very weird. But I think it fundamentally comes from the desire to be different, the desire to be new.” This, he argues, is a good thing—both because the industry thrives on innovation and because it’s still playing catch-up in a major way when it comes to diversity and inclusivity.

Unlike past waves of young starlets who have enthralled high fashion—the Hailees, Elles, and Dakotas of the world, or, earlier, Brooke Shields and Natalie Portman, who fronted campaigns for Calvin Klein and Isaac Mizrahi, respectively, at age 15—today’s teenage stars are not emblems of innocence or precocious sex appeal.

Instead, like many of their generation, they’re outspoken on issues like race, feminism, and environmentalism; embrace gender fluidity; and celebrate LGBT rights. Teens today have been exposed to tragedy, violence, and terrorism from a young age, says Nancy Breiling Nessel, a marketing expert who specializes in Generation Z, and, having grown up with social media, they see it as a tool to advance the conversation and make the world a better place.

In a word, they’re woke.

And while a few decades, and even a few years, ago, that may have seemed like a liability to a brand whose customers skew older and wealthier, today the cultural climate is such that anything more conservative seems behind on the times.

“It’s definitely something that appeals, especially to brands that characterize themselves as rebellious and freethinking—even some that don’t,” says Tina Craig, founder of Bag Snob. “Controversy always makes for a good story and invites welcome hype.”

There’s also the hard truth that many of these brands—Chanel and Louis Vuitton in particular—generate the vast majority of their revenue through sales of handbags and accessories.

“I think a beautiful, super-cool campaign for a smaller brand like Proenza [Schouler] could well translate into sales,” says Munro. “But is a beautiful campaign by Chanel going to affect bag sales? I don’t think so.”

Craig, who acts as both collector and critic of many luxury brands’ biggest moneymakers—handbags—seconds the notion that a celebrity face doesn’t necessarily swing shoppers’ opinions of a brand. “For me, no, it doesn’t,” she says. “I’ve conditioned myself to be objective when it comes to such packaging, and I buy what I like regardless of celebrity attachment. However, I’m in the industry and I know these images are carefully curated and crafted by a team of marketing strategists, so I tend to keep that in mind. I’m obsessed with Cate Blanchett, for example, but I’m more apt to be influenced to buy something she’s wearing in real life, not on the red carpet or in ads.” 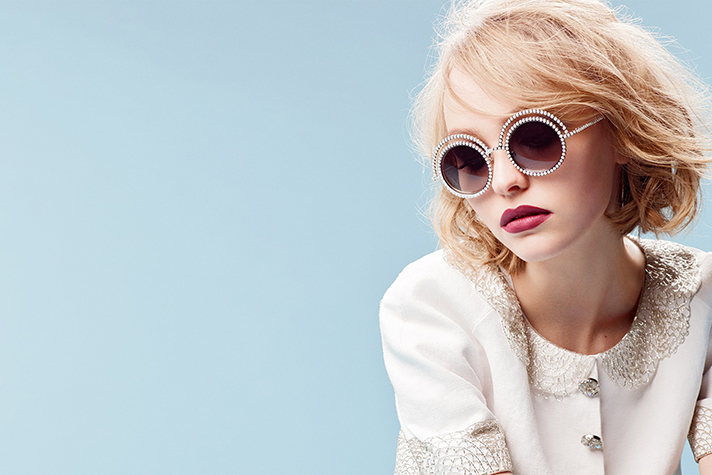 Until Karl Lagerfeld retires, Munro posits, “I don’t think there will be any noticeable shift in a positive or a negative direction—he has such an established client base that that’s what they want. The same with people that you see in the airport with a lot of Vuitton bags—they’re not going to not buy Vuitton bags because of Jaden Smith. Are they going to alienate anyone by being more inclusive? I don’t think so. I think the world is more inclusive these days.” And even if they do, he continues, “I think that these brands, rather than being seen as bigoted and elitist, they’d rather lose a few customers and be seen as all-embracing and decent.”

Indeed, when Willow Smith was announced as Chanel’s new brand ambassador earlier this month following the house’s Paris Fashion Week show, she thanked the brand for “expanding the concepts of ‘beauty'” by picking her for the role. (While Chanel has had black campaign stars in the past—Binx Walton, Joan Smalls, Lineisy Montero—Smith may be the first with dreadlocks, a nose ring, and a history of speaking out against traditional gender norms.) She follows in the footsteps of Lily-Rose Depp, the 16-year-old daughter of Johnny Depp and Vanessa Paradis, who fronted Chanel’s eyewear campaign this past fall and made headlines around the same time for coming out as sexually fluid.

Jaden Smith, meanwhile, told British GQ this month that he’s “never seen any distinction” between men’s and women’s clothes and thinks people in general are “confused about gender norms.” According to Vuitton’s press release about his campaign, “He represents a generation that has assimilated the codes of true freedom.” He also memorably wore a skirt to prom.

Stenberg—his prom date—appears in McCartney’s new ads alongside Leon; singer Grimes (née Claire Boucher); and 22-year-old Kenya Kinski-Jones, progeny of music legend Quincy Jones; and has been a vocal member of the #BlackLivesMatter movement, calling out cultural appropriation on social media and in the press. 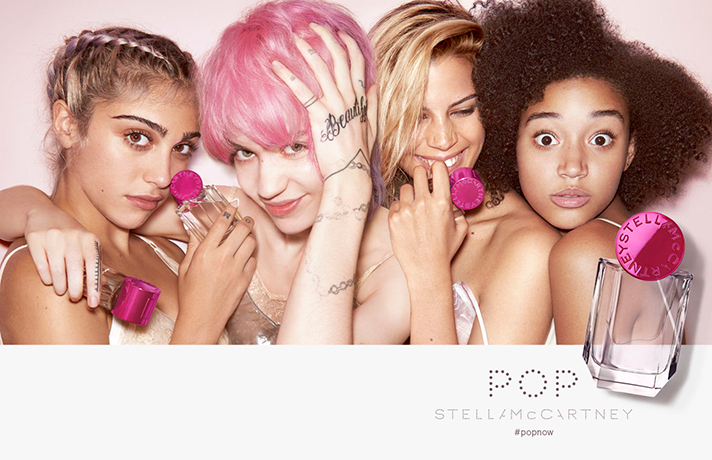 In his editor letter this month, W chief Stefano Tonchi addresses the staggeringly young age of his cover stars. “The new generation, Gen Z, which spans current teenagers like the three on our cover and their peers in their early 20s, is in a hurry to be recognized, yes—but in a refreshingly thoughtful way,” he writes. “Unlike their predecessors, they are no slackers. Generally speaking, they are curious, determined, and hardworking. If there is anything they lack, it’s a sense of entitlement.”

So, not only do we envy teens’ freedom, metabolism, and glossy hair—now we’re fawning over their wisdom, too. (What do the olds even have left?)

Whether teens today will respond to the ads by actually shopping (or encouraging their parents to shop) the brands is another story entirely.

“I do think teens will respond favorably to icons,” says Nessel. “But I believe they will align with brands that have true authenticity, brands that have a cause and demonstrate values that Gen Z embraces like diversity and world peace.”

In other words, if they want next-generation dollars and not just headlines and hype, labels need to do more than just cast a cool teen—they’ve got to back it up with cool-teen values.