Months after their finale, fans want to know if Tayshia and Zac are still together after The Bachelorette 2020 or if they’ve called off their engagement like many Bachelor Nation couples before them.

For those who don’t remember Tayshia’s season, here’s a short recap: The Bachelorette season 16 finale aired on December 22, where Tayshia Adams chose Zac Clark over her final three finalists, Ivan Hall and Ben Smith. After Tayshia gave Zac her final rose, Zac proposed to her and Tayshia accepted. After The Bachelorette finale, Tayshia and Zac confirmed that they were still together by going Instagram official. Soon after the episode, Tayshia took to her Instagram Stories with a video of her showing off her engagement ring and sitting on Zac’s lap. “2021 we ready for you baby!” she captioned the post. In an interview with People, Tayshia and Zac also confirmed that she’s planning to move from Los Angeles to New York to be together. “She has a one-way ticket to New York,” Zac said. “We’re going to get comfortable. And I’m going to date the heck out of her!”

Tayshia added, “We have so many similarities regarding our goals in life. I’ve never been in a relationship like this before. Our communication is phenomenal and I feel really safe with Zac. It just feels so right. And I can’t wait to experience life with him by my side.” 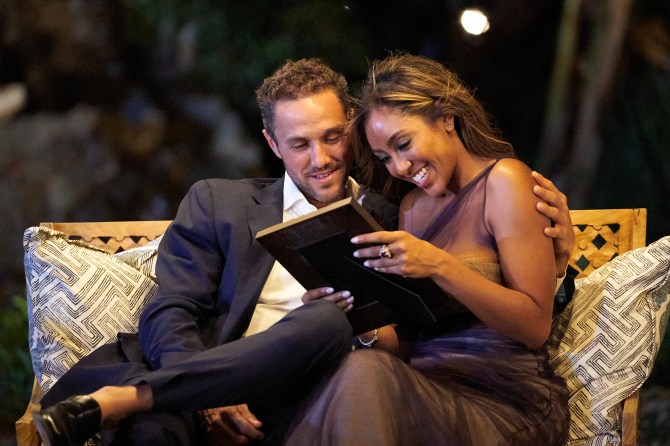 Tayshia, who worked as phlebotomist before her reality TV career, also told People that she hopes to help with Zac’s recovery center. “Zac has such a big heart and his line of work is just helping people,” she said. “That’s why I got into the medical field, because I truly do enjoy helping people. If I could help in any part with [the recovery center Zac co-founded, Release Recovery], that’s a good partner to have by your side, working together to help others.”

As for their wedding, Tayshia said at the time, “We’re not rushing. But it’s an amazing sense of security to know that I’m not going anywhere, and he’s not going anywhere.” The two did have babies on the mind though. “She wants 17 children,” Zac joked. Tayshia added, “I would love to have five children. And Zac isn’t shying away from that!”

However, months after their finale, fans wondered if Tayshia and Zac’s relationship was over. The rumors started after Zac’s mom, Kaitlyn, seemed to unfollow Tayshia and the podcast she hosts, Click Bait, on Instagram, according to the fan Instagram account @Bachelornation.Scoop. The account received an anonymous tip that Zac’s mom unfollowed Tayshia “weeks ago.” The account, which also noted that Tayshia recently posted on her Instagram without an engagement ring, also speculated that the two split after Zac didn’t congratulate Tayshia on his social media after she was announced as a co-host for season 17 of The Bachelorette.

Tayshia, however, shut down the rumors in an Instagram Story on March 15. “OK. What? There are all these rumors going around that I’m not wearing my ring and Zac and I are broken up. I don’t know what is happening,” Tayshia said before explaining why she didn’t have a ring on in a recent Instagram. “But you guys, I was holding my phone with my left hand. But ironically enough, as I was showing my hand maybe a week ago, my ring was literally swinging around my finger. A lot of you were messaging me like, ‘Don’t lose your ring!'”

She continued, “I was in L.A. finally able to drop off my ring and get it sized. Yes, ironically, it was my right hand in my story but I also just got my ring sent in to be cleaned and sized finally. It’s been six months since I’ve had it. I should have it again maybe tomorrow or Wednesday. Everything is good on this forefront. Thank you so much for being concerned. But we’re good. We’re chilling.”

In the caption, Tayshia explained why she had to respond to the speculation. “Top of the mornin to ya! Woke up to hundreds of messages asking this but y’all not gonna lie, I don’t like getting weird DMs putting this weird energy into the universe lol,” she wrote. She continued in a different slide, “Don’t feel like I need to explain this buuuttt-My ring hasn’t been properly sized yet & needed to be cleaned soo it’s currently with Mr. @neillanecouture.”

She went on to ask fans to note speculate about her relationship. “I love that there’s so much love & support around our relationship but please don’t put unnecessary rumors/pressure on us,” she wrote. She continued, “Annnnyyywayysss lol, now that that is cleared up, let’s keep putting out positive energy as we head into this week.”

Tayshia also confirmed to Cosmopolitan in May, a month before she debuted as the host of The Bachelorette season 17, that she and Zac are still together and enjoying their engagement. We’re doing great, we’re doing well. Any wedding planning? No, not really. I’m really just trying to enjoy New York. And I think that’s where our energy is just because, I don’t know, we just want to enjoy each other. Really, that’s what it is. Engagements are supposed to be fun as well, so we’re just making the most of it,” she said at the time.

She went on to describe what they’ve been up to since their engagmeent. “The thing is, with the pandemic, it hasn’t been anything too crazy. But his parents are moving back from, they have a place in Naples, Florida. And they’re going back to the shore this weekend,” she said. “So I’ll finally be able to, like, really hang out with them and have them within driving distance, which is gonna be super fun. Because we haven’t really been able to do that. So that’s the most normal thing we’re doing and looking forward to.”

As for what it’s like to live with her Bachelorette winner, Tayshia told Cosmo, “Oh my god. It’s like a sleepover with your best friend, of course it is. New York has been such a joy to experience. It’s so different living there as opposed to visiting. It’s a different kind of magic. It’s been fun.” There you have it. Tayshia and Zac are still together after The Bachelorette and not broken up.