Either Taylor Swift is really getting into #FollowFriday a little early, or the singer’s Twitter and Instagram accounts have been hacked.

Today Tay’s 51.4 million Twitter followers saw a couple of seriously strange posts. Several tweets, which have been deleted, called out for Swift’s fans to follow Twitter users @Veriuser and @Lizzard.

MORE: Taylor Swift Is ‘Obsessed’ With Mashups of Her Songs

One particularly suspicious tweet that was sent earlier this morning was quickly retweeted more than 2,000 times. 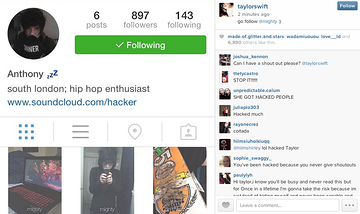 It didn’t take long for the musician to catch word of the hack, and the tweets and Instagram images were quickly deleted. Instead, Swift had one thing to say to those hackers–and it kind of made us love her even more: