It’s a brand new era. Taylor Swift’s MTV VMAs performance video of “You Need To Calm Down” and “Lover” was so stunning that our hearts are still soaring. Fresh off the Aug. 23rd release of her seventh album–the pop/country icon has taken the VMAs stage once again to open the show.

In a recent interview with Good Morning America’s Robin Roberts, Taylor chatted about how excited she was to kick things off. She said, “I’m opening the show, so that’s exciting! I don’t know if I was supposed to say that actually, but I’ve done it now, so can’t take it back.”

Though Lover legit just dropped, Taylor is nominated for 10 different awards this year, including video of the year, song of the year, and best pop video. Also, her appearance at this year’s VMAs was super significant. If you recall, back in 2009–Taylor was awarded  female video of the year for “You Belong With Me.” However, rapper Kanye West interrupted her acceptance speech –declaring that Beyoncé should have one. It is a moment that would go down in MTV VMA history–and apparently, it also made Queen B cry.

Recently, Taylor shared a diary entry from Sept. 18, 2009–where she reflected on the moment that would go down in pop-cultural history. She wrote,

Ahh… the things that can change in a week. If you had told me that one of the biggest stars in music was going to jump on stage and announce that he thought I shouldn’t have won on live television, I would’ve said, ‘That stuff doesn’t really happen in real life.’ Well… apparently…. It does

Though things aren’t exactly friendly between Taylor and Kanye–a decade later, and the “ME!” songstress will probably never be excluded from that narrative, we think with this performance, she’s put all of that firmly in the past. 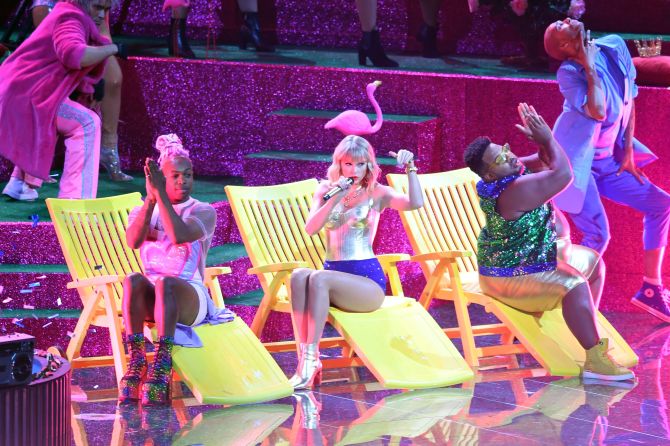 Anyway back to this performance. Did you catch Camila Cabello getting her entire life in the audience?

Watch the performance for yourself below.