The catfight is dead and buried. Taylor Swift and Katy Perry just solidified their friendship for all of Instagram to see, so we guess this really is a new era for the former enemies. If you recall (or even care), back in 2013, a rift between the singers was made public when Swift accused Perry of luring her backup dancers away from her Red tour for her Prism tour. To keep it real, neither one of the songstresses is known for their dance moves so we never understood why this even matters, but whatevs. The Reputation songstress went on to make “Bad Blood” about Perry, and for years they would throw subliminal shade at one another even though they both claimed to be about women’s empowerment.

Luckily, in 2018, Perry decided that she’d had enough. She extended a literal olive branch toward Swift. On her IG stories, the 1989 singer shared a snippet of the note the “Roar” singer wrote her and added a caption, “Thank you, Katy,” with a double heart emoji. The pair have been working to mend their relationship since then.

Last week, the ladies raised eyebrows when they were seen spreading love to one another on social media. First, the “California Girl” singer liked a photo that Swift tweeted. Then Swift added Perry’s song “Never Really Over” to her Apple Music playlist. Now they’ve gotten more deliberate about sharing their “love” for one another. 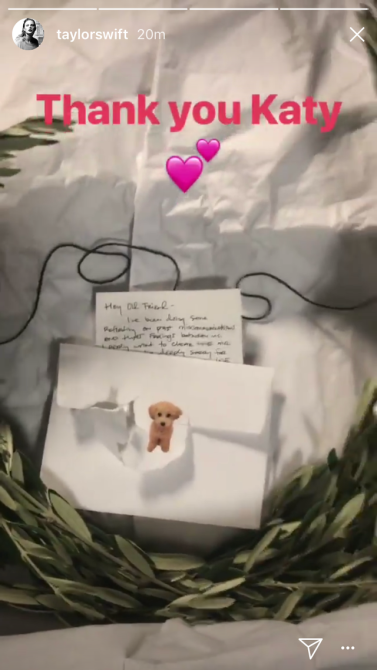 The recently engaged singer just shared a plate of chocolate chip cookies that Swift sent her, with the phrase, “Peace at Last” iced on the platter. The caption read, “feels good @taylorswift.” Swift commented on the pic with 13 pink heart emojis.

Now fans are obsessed with an idea of a collab between the pair. After all, Katy said she’d be open to making music with Taylor earlier this year.