Remember when Taylor Swift released “Bad Blood,” and it was all about the fight between her and Katy Perry? We do. But now we have an update on the Taylor Swift and Katy Perry feud, and it seems all is well between the two singers. Thank goodness! Last year, the two pop-stars announced the end of their seemingly life-long feud. Perry took the high road and extended an olive branch—literally. Like, the “Roar” singer legitimately mailed T-Swift an olive wreath with a note that said she was, “deeply sorry.” The “Gorgeous” singer shared the message from Perry on her Instagram story ahead of her Reputation tour. Since then, things between the two singers has remained calm and uneventful. We haven’t really had any updates or heard of any communication between the two since the whole olive branch thing.

But eagle-eyed fans have noticed a change in the women’s social media behavior that seems to suggest things are still peachy-keen between the two of them. And maybe…maybe they’re actually friends now. Perry made the first move and liked one of Swift’s Instagram photos of her snuggled up with her new kitten, Benjamin Button. Normally, a random like would go unnoticed but T-Swift fans are always on the lookout, so they recognized the social media behavior immediately. It’s a small thing—just a double tap—but given their history, even liking a photo means a lot.

Swift replied in kind with a similarly subtle move, but still public enough for fans to notice. As you well may know by now, Swifties track every single move of Taylor Swift’s, from the secret easter eggs that she drops in music videos to her Spotify activity. And let it be known that after midnight last night (this morning?), Swift added Perry’s new single “Never Really Over,” to her Apple Music playlist. Boom. 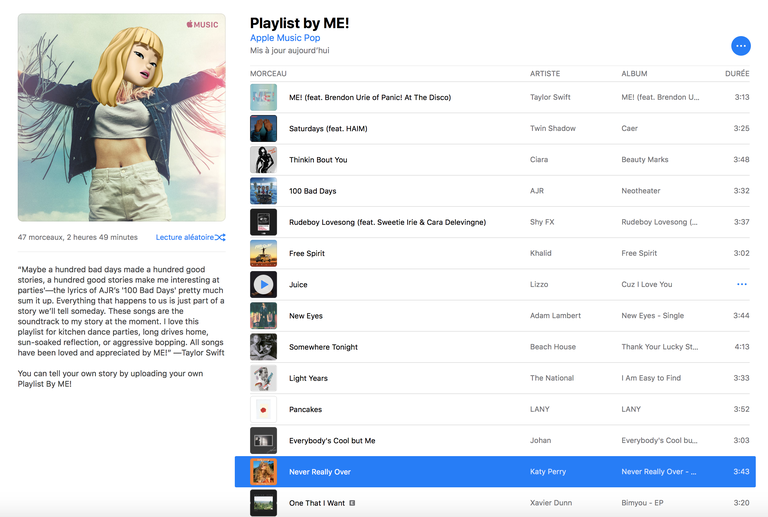 Some are hopeful this might be one of Swift’s Easter eggs suggesting a forthcoming collaboration between her and Perry. That seems like a bit of a stretch, but hey—you never know! Perry said she was “open” to a collaboration with T-Swift, while chatting at the iHeartRadio Music Awards. We shall see!