In case you haven’t heard: Taylor Swift and Karlie Kloss are back on. After months of rumors, the best friends squashed any talk of bad blood when they took an Instagram selfie together (their first in more than a year!) to celebrate Swift’s Nashville Reputation Stadium Tour show in August. But how did we get here?

It’s no secret that Swift and Kloss have been on a wild ride. Once upon a time, they were the most inseparable friends in Hollywood. Their Instagram baking parties made national news, and no awards show was complete without Swift and Kloss dancing in the front row. Then, somewhere along the way, it all stopped. Swift was nowhere to be seen on Kloss’s Instagram, and the two hadn’t hung out in public in ages. It led to dozens of fan theories: Were they feuding? Was it because of Kloss’s friendship with Kendall Jenner?

In the end, all was fine and Kaylor is alive and well, but we still can’t help but wonder what happened. Though we might never know the story behind Kaylor’s year-long breakup, we can glean some clues by investigating the history of their friendship—from its birth to its fallout to its resurrection.

Before ever meeting Kloss in person, Swift appeared on the cover of Vogue and said that she “loves” Kloss and would love to “bake cookies” with her. “I love Karlie Kloss. I want to bake cookies with her!” Swift said. After reading Swift’s comments, Kloss tweeted at her, inviting her to a baking session. “Hey @taylorswift13 love the @voguemagazine cover! Your kitchen or mine? :)” Kloss tweeted.

Kloss and Swift officially met at the 2012 Victoria’s Secret Fashion Show where Swift was performing and Kloss was walking. The two became fast best friends, with them tweeting and Instagramming pictures of themselves behind-the-scenes from the show. (Kloss even quotes one of Swift’s songs, “Love Story,” as her caption.) “We met at the show, we never met before, but we’re BFFs now. It’s nice to meet another American girl, we’re the same age and she’s so inspiring—she’s so talented and she’s true to who she is. She’s a cool girl,” Kloss later told HollywoodLife.

In the months that followed Swift and Kloss’s friendship only grew. In March 2014, the two went on a road trip together across the California coast, which they documented on Instagram. The vacation included lots of scenic pit stops, bakery visits, and Swift and Kloss marking their friendship in the sand of one of California’s beaches.

From then on, Swift and Kloss’s friendship was solid. They attended the 2014 Met Gala together. Kloss attended Swift’s famous Fourth of July Party, along with Emma Stone, Lena Dunham and other of Swift’s celebrity friends. The two became so close that the Daily Mail published an article claiming that Swift and Kloss were living together and possibly in love. The article was later deleted after a representative for Kloss told Gawker that the rumors were untrue. “Karlie and Taylor do not live together and have no plans to live together. The Daily Mail did not verify the facts of the story prior to publishing it,” the representative said.

Swift and Kloss’s friendship still seems strong. They sat courtside at a Knicks game in New York together. Swift released her fifth album, 1989, which received a lot of social-media praise and promotion from Kloss. And the two reunited on the Victoria’s Secret catwalk for the lingerie brand’s 2014 fashion show. The two were as thick as thieves. They were so close that Swift had to take to her Twitter to shut down rumors that they were romantically involved. “As my 25th birthday present from the media, I’d like for you to stop accusing all my friends of dating me,” Swift tweeted, with the hashtag “#thirsty.”

March marked a milestone in Swift and Kloss’s friendship, as they both appeared on the cover of Vogue together. The article dove into the history of the couple’s friendship and why they were perfect fits for one another. The article was also accompanied by several videos, including one where Swift and Kloss took a “friendship test” and declared each other as her “best friend.”

For the music video for her 2015 single “Bad Blood,” Swift famously cast her roster of celebrity friends. Of course, Kloss made it in the video and played a prominent role as the leader of an opposing squad. In August, Kloss went on to attend the 2015 MTV Video Music Awards with Swift and accompany her on her 1989 World Tour, letting fans know that their friendship was still going strong.

Kloss and Swift hung out here and there in 2016, but nothing like the years before it. One of the last times they were photographed publicly was in October 2016 when Swift, Kloss and a couple of their mutual friends, including Serena Williams, went to dinner in New York. 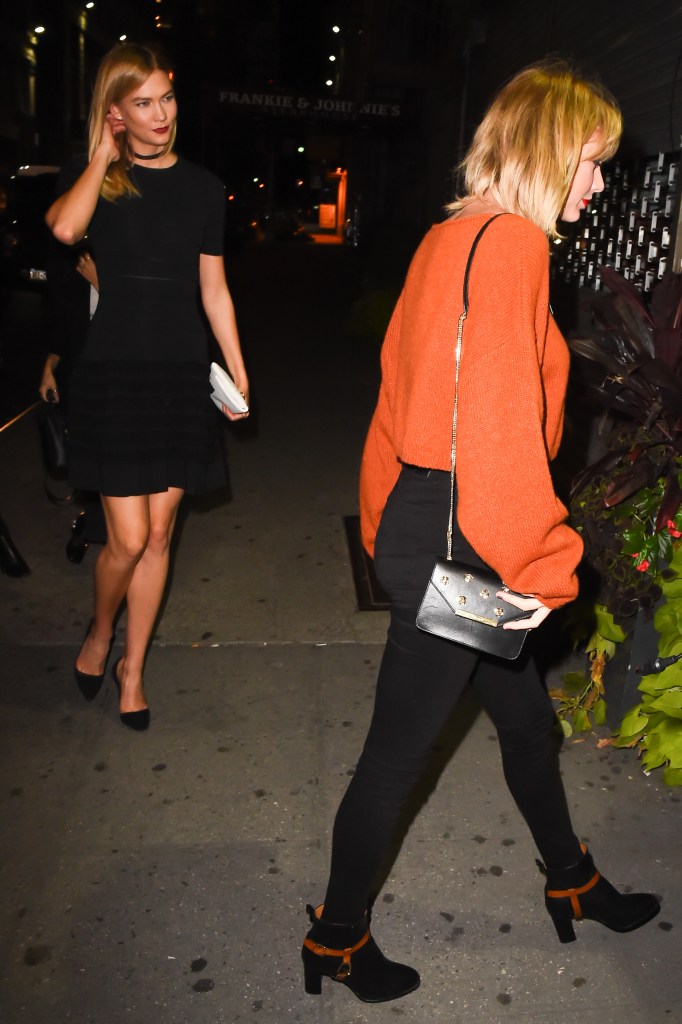 2017 saw almost no Kaylor hangouts. Fans didn’t think much of it until Kloss was photographed with Kendall Jenner in July 2017 at Paris Fashion Week, which led to the first hint that there might be bad blood between the two best friends. As fans know, Kendall is the younger sister of Kim Kardashian, whom Swift feuded with in July 2016 after Kim posted a private phone call between the singer and Kanye West on her Snapchat and accused her of lying. Because of Kendall’s association with Kim, many wondered if Kloss and Swift’s friendship was on the rocks, leading Kloss to do her best friend dirty like that.

MORE: 10 Celebrities Who You Didn’t Know Have Beef with Taylor Swift

Swift shocked fans at the 2017 MTV Video Music Awards when she released the music video for her single “Look What You Made Me Do,” which showed her wearing a T-shirt with several of her best friends’ names, such as Blake Lively. One name that was missing was Kloss’s, which only fueled rumors that the BFFs were no more.

This year, Kloss premiered her Freeform talk show Movie Night with Karlie Kloss. But a year ago, in October, there was some drama surrounding one of her guests. According to The Blast, Kloss asked Swift to be a guest on her talk show, but the singer “politely declined” because of “scheduling issues.” The story is only a rumor, so take it with a grain of salt, but true or not, it still didn’t make Kaylor fans happy.

Kloss was photographed with Katy Perry, along with a couple other friends, at a restaurant in Los Angeles. As fans know, Swift and Perry don’t have a reputation as friends. They became involved in a feud after Swift suggested that Perry hired her backup dancers from underneath her for a past tour, which led to songs such as “Bad Blood” and “Swish Swish” that many fans believe to be about the feud. Perry later confirmed the story in an interview with James Corden. Many fans thought that hangout was shade at Swift, especially after Kloss captioned a January video of her playing basketball with “Swish Swish,” the song that Perry reportedly wrote about Swift. (Kloss later changed the caption.)

After months of rumors, Kloss broke her silence about the state of her friendship with Swift in an interview with the New York Times. “Don’t believe everything you read,” Kloss said, suggesting that the two are on good terms and still hang out often.

Kloss announced her engagement to her longtime boyfriend, Joshua Kushner, on Instagram. Fans waited for Swift to congratulate Kloss in the picture’s comments or at least like the Instagram, but that never came. Rumors of a fallout were only fueled after Kloss posted several screenshots of her and her best friends on her Instagram story. The pictures featured the moment Kloss told her friends over FaceTime that she was engaged. Swift was noticeably missing from that list. In that month, Kloss was also photographed with Swift’s ex, Harry Styles, which didn’t help her case either.

Kaylor is officially back on. After a year and a half of unconfirmed reports, Kloss and Swift reunited for an Instagram selfie at the singer’s Reputation Stadium Tour show in Nashville. “Nashville was out of this world, I am SO proud of you 🖤” Kloss wrote in the caption. Prior to the now-viral selfie, Kloss documented herself on her Instagram story attending the show and singing along to Swift’s songs, squashing any rumors that the two had bad blood. Now the only question is if Swift will be a bridesmaid at Kloss’s wedding.