No one (I repeat, no one!) did quarantine productivity quite like Ms. Taylor Alison Swift. I don’t care how many banana breads you baked, how many TV shows you binge-watched or how many new hobbies you learned—my queen dropped not one, but two fire albums! And after being on lockdown for so long, she emerged at the 2021 GRAMMYs to give the performance I’ve been waiting for. Oh, and let’s not forget her incredible ‘fit.

While I’m a die-hard Taylor fan—Folklore and Evermore have been on repeat since the day(s) they dropped!—I wouldn’t exactly call her a fashion icon. I’m sorry, fellow Swifties, don’t hate me! I do think she’s served some incredible looks and had some amazing style eras, but she isn’t on par with the great fashionistas of our time, so while I think she’s beautiful and stylish, I can’t pretend she always has the best fashion sense.

However, her latest GRAMMYs look is one of my all-time favorites. It just feels so Taylor. There to perform a medley of “Cardigan” (A song nominated for both Song of the Year and Best Pop Solo Performance, NBD), “August” and “Willow,” Swift took the stage in a breathtaking gold metallic Etro gown with pops of royal blue lace. Very Stevie Nicks meets fairytale princess! Her hair was styled in a messy updo with a thin gold headband framing her signature bangs and her glam featured extra-sparkly eyeshadow and a fun pink lip. Oh, and she was barefoot, if you’re curious. 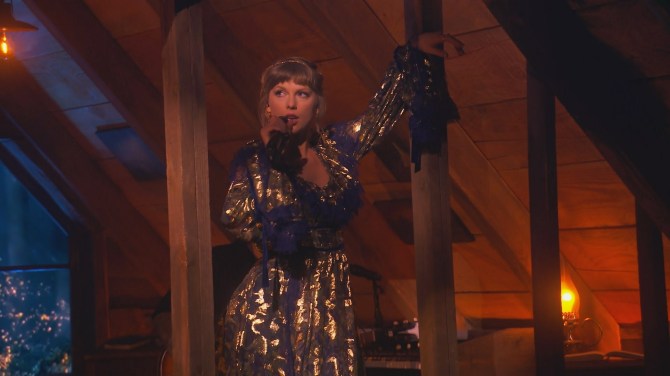 So! Much! Yes! Believe me, I was a fan of Swift’s edgy Reputation look, her colorful Lover aesthetic and even that Bleachella moment, but I really think she’s come into her own with these last two albums and I’m digging the stripped-down, girl-in-the-corn-field-next-door vibes. Still, I’m glad she made things a bit more glam for the GRAMMYs. They’re a pretty big deal, after all!

Prior to the performance, Swift hit the red carpet in an Oscar De La Renta flower-coated long-sleeved mini dress and pink heels. Florals, for spring? Actually groundbreaking, when they’re 3D! 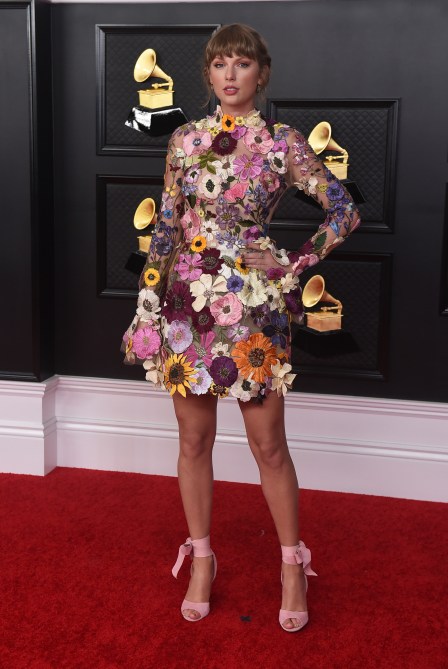 With pandemic precautions slowly but surely becoming less strict, I’m genuinely hoping that Taylor Swift does a massive Coachella-style festival with one day each devoted to Lover, Folklore and Evermore, aka the albums she didn’t get to tour because of coronavirus. Until then, her fabulous Grammys performance will just have to be enough to hold me over. Love you, Tay!