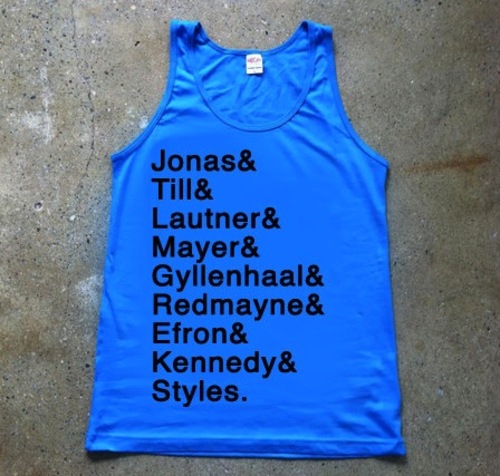 We already know Taylor Swift fans are not happy when a clothing label decides to poke fun at the pop-country’s singer notoriously, um, busy love life.

In fact, just last month fans managed to force Abercrombie & Fitch to cease selling a silly tee that said #moreboyfriendsthant.s.” (Yes, we’re aware that the shirt didn’t make sense for a number reasons, chief among them the fact that there was a period in a hashtag—it won’t work!)

As it would happen, Swift’s rabid fanbase—creatively dubbed The Swifties—are up in arms yet again over a $20 tank top crated by Bad Kids Clothing that not-so-cryptically highlights the names of Taylor’s famous ex-boyfriends. They’re so angry, in fact, that they’ve launched a pretty alarming full-scale verbal attack on the site’s blog after founder Andi Cross created a post explaining that the shirt is meant to  be funny.

As our friends at Racked pointed out, it all started when Bad Kids Clothing employees posted Instagram pictures of themselves rocking the tank top, which was originally created in jest for a friend of the brand to wear to a Taylor Swift concert. Soon after, the rage-filled Swifties caused #BadKidsClothingTakeAwayTSwiftTop to start trending on Twitter.

MORE: From Beliebers to Deadheads: The Nicknames of 20 Rabid Celebrity Fanbases

So far, the shirt hasn’t been pulled from the retailer’s website, but apparently Cory Monteith’s name was removed from the tank top in light of his death over the weekend.

“We will not be removing the shirt from our store. We will however remove Cory’s name. This shirt is intended to be light hearted and a joke—for those who can understand this type of humor. We will deal with the death threats and incredible slander from here on out, when necessary, with proper authorities as it is never acceptable to threaten anyone’s life,” the brand posted on its website.

As you’d imagine, the incredibly earnest Swfities can’t understand “this type of humor” and went nuts posting fairly scary, threat-filled comments on the brand’s website, which you can see here.

What do you think? Should Taylor Swift’s fans learn to take a joke, or is the tank top totally inappropriate? Let us know below!