A lot is happening in Taylor Swift’s new video. For PRIDE Month, the songstress gathered a handful of friends from the LGBTQ+ community for the visuals for “You Need to Calm Down.” Now, there is a theory that Taylor Swift is bisexual. Swift has been notoriously private about her personal life as of late. Though she’s written music about her past romances– she’s kept her current relationship with Joe Alwyn out of the public eye. However, since she has been taking a stand against injustices toward the LGBTQ+ community, could she be subtly talking about her own sexuality? Twitter is convinced she is.

The “You Need to Calm Down” video is full of Easter Eggs. There is so much going on that you’d have to be paying super close attention even to catch this theory. At one point in the video, Swift is dressed just like the bisexual pride flag. If you didn’t know, the bi flag is magenta, purple, and blue. In the shot, the Red singer’s hair is also dyed in these colors. It was an extremely quick and subtle moment in the very busy video. 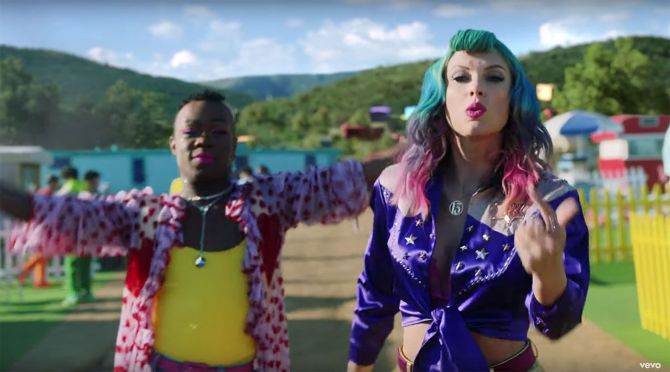 Since Swift is being accused of being an LGBTQ activist for PRIDE–her subtle coming out would mean that this issue is closer to her heart than we thought. Twitter, of course, was all over it.

In addition to her videos and using her platform politically (for the first time ever), Swift has been advocating for the Equality Act. She posted on Instagram,

In excellent recent news, the House has passed the Equality Act, which would protect LGBTQ people from discrimination in their places of work, homes, schools, and other public accommodations. The next step is that the bill will go before the Senate. I’ve decided to kick off Pride Month by writing a letter to one of my senators to explain how strongly I feel that the Equality Act should be passed. I urge you to write to your senators too. I’ll be looking for your letters by searching the hashtag #lettertomysenator.

Swift’s sexuality is her business, but we also know how deliberate she is about every single thing she does. We don’t think it’s an accident that her hair was randomly dyed like the bisexual flag. We suppose we’ll have to wait until Lover drops on Aug. 23 to see if she makes any more public declarations.