When dating site Dreamcliq first launched at the beginning of the year, founder Melissa Jones’ ambition was to create a radically new kind of dating site that emphasized visual connections over resume-like bios, encouraging users to create inspiration boards (not unlike Pinterest) in lieu of a conventional profile. At a dinner hosted by Dreamcliq, Jones told guests that the visual element is “a more organic way of looking at somebody—you can see and interpret them for what they are.”

Now, the site is adding an extra layer of serendipity in bringing on super-star astrologist Susan Miller to offer playful matchmaking advice to those browsing the site for a mate. Each astrological profile on the site now includes a classic Miller quip about any potential for romance and overall compatibility. (Miller herself describes the insights as “smart and sassy.”) 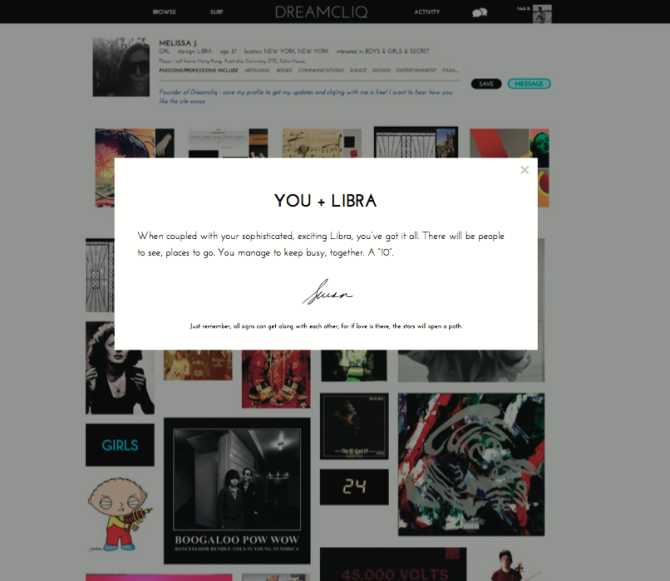 Miller herself is no stranger to the Web—she was an early adopter, in fact, and can talk at length about her desire to keep her site, Astrology Zone, constantly updated for her fans (in multiple languages). Her site now draws more than six million unique visitors a month, and she also contributes to 10 different magazines including Elle and Vogue Japan.

In person, it’s easy to see why so many people are drawn to Miller. Despite having spent weeks battling a serious illness that kept her on “bread and water,” Miller was a vivacious bundle of energy wrapped in a red dress, happy to talk at length about the partnership and offer insights into the search for romantic connections.

“Love is hard and it’s complicated, but it’s worth it,” she insisted. “And [Melissa’s] doing it in a classy way.”

The duo’s friendship is, in a way, a great example of serendipity—Jones decided she wanted to work with Miller on the project, and just started cold-calling. After a while, Miller accepted her overtures and the two developed a fast friendship.

Needless to say, all the timing of the launch has been considered. “We even moved the launch date to June 18,” Miller said. “I wrote that last year—June 18 … I wrote, ‘A four-star day for love and romance—it’s the perfect night to have dinner under the stars.’ I wrote this last year, I didn’t know!” (The press release on the launch notes that June 18 is “an auspicious day when Venus, the ruler of love, joins Jupiter, the purveyor of luck and infinite possibilities for a cosmic dance like no other.”)

In partnering with Dreamcliq, Miller is again expanding her sphere of influence in offering insights and guidance when it comes to charting a course towards love and happiness. But we were curious about the missteps she saw in her followers’ romantic ambitions—what did people often get wrong on their search for a true mate?

“Oh, I’ve got the answer to that one,” Miller laughed. “I feel that people have a definite idea—almost like it’s a job interview, and that they hit all these qualifiers. Nothing is definite in this life. Some girls are saying, ‘Oh he has to be really making over $150,000’—and they actually have the figure! Things change in life. People can lose everything. I think you have to be open to different types of people because you may think you know what you want, and then you could meet this magical person that doesn’t hit any of those. I see it all the time—there’s too much rigidity about who they’ll go out with. He has to be a certain height—oh my gosh. I listen to my friends and I’m like, ‘You’ve gotta soften this somewhat. You may miss the person of your dreams if you’re too rigid.'” 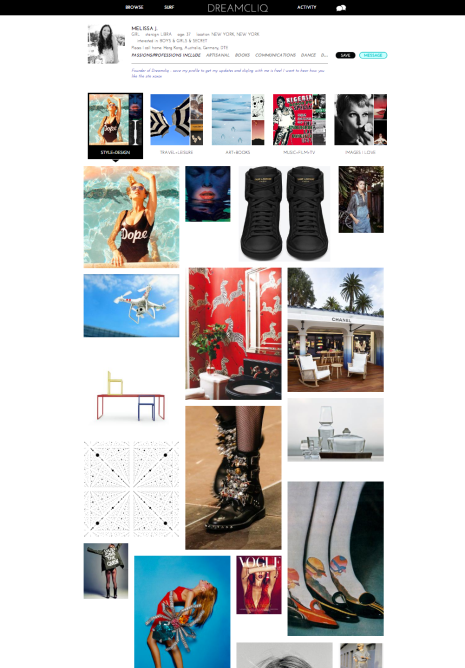 Jones agreed, nothing that Dreamcliq’s goal is, in many ways, to soften some of those guide posts. “I think a lot of people, when they’re looking for a perfect mate, they’re looking for a certain set of stats or this resume that fills that,” she said. “And that’s not what love is—it really isn’t.”

Miller was quick to add another big mistake to which that many women, in particular, fall victim: rushing into things. “Some of the mistakes that women make are that they start asking, like, ‘Do you want a child?’ like on the second date. They’re pushing too fast,” she insisted. “Get to know the person, be their best friend, enjoy them. This is supposed to be the best time—the courtship! […] You’re going to scare the other person if you rush the deal.”

Here’s hoping the stars align for us all!