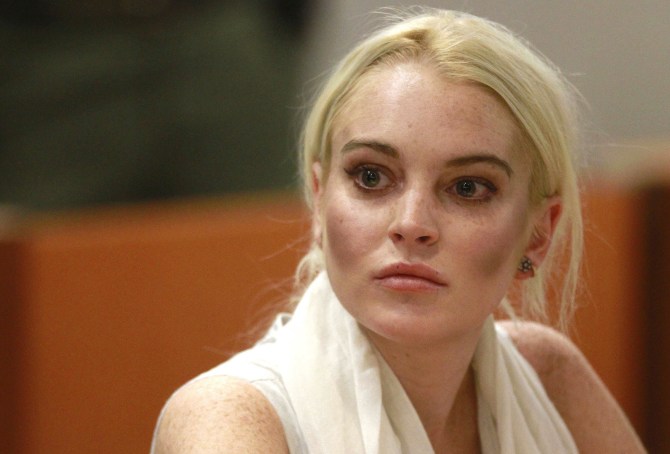 Fresh off of her critically panned Lifetime movie “Liz & Dick,” Lindsay Lohan is—quelle surprise—back in the headlines again. The 26-year-old starlet was arrested at 4 a.m. this morning after allegedly doing the most un-Elizabeth Taylor thing ever: Punching a woman in the face at New York City hotspot Avenue. Such grace, such class!

According to law enforcement, Lohan and the unidentified woman were sitting in separate booths when they began to argue. Lohan tried to quell the situation, announcing: “Give me my space.” (Cue eye roll). Naturally, the conflict started up again and it got physical, with Lohan decking her in the left side of the face.

By the time police arrived, LiLo was fleeing the scene in a pal’s car, which the cops quickly tracked down. She was immediately cuffed and taken into custody. Not the wisest move for Lohan, as her probation is already in question after lying to cops in June, claiming she wasn’t in the driver’s seat during a nasty car accident. Obviously, an assault charge isn’t going to help her case. On another interesting note, this isn’t Lohan’s first issue at Avenue. She was banned from the club back in 2009 for tweeting that Justin Timberlake was cheating on Jessica Biel.

At this point, it seems like an unnecessary plea, but we’ve got to say it: Girl, get it together.