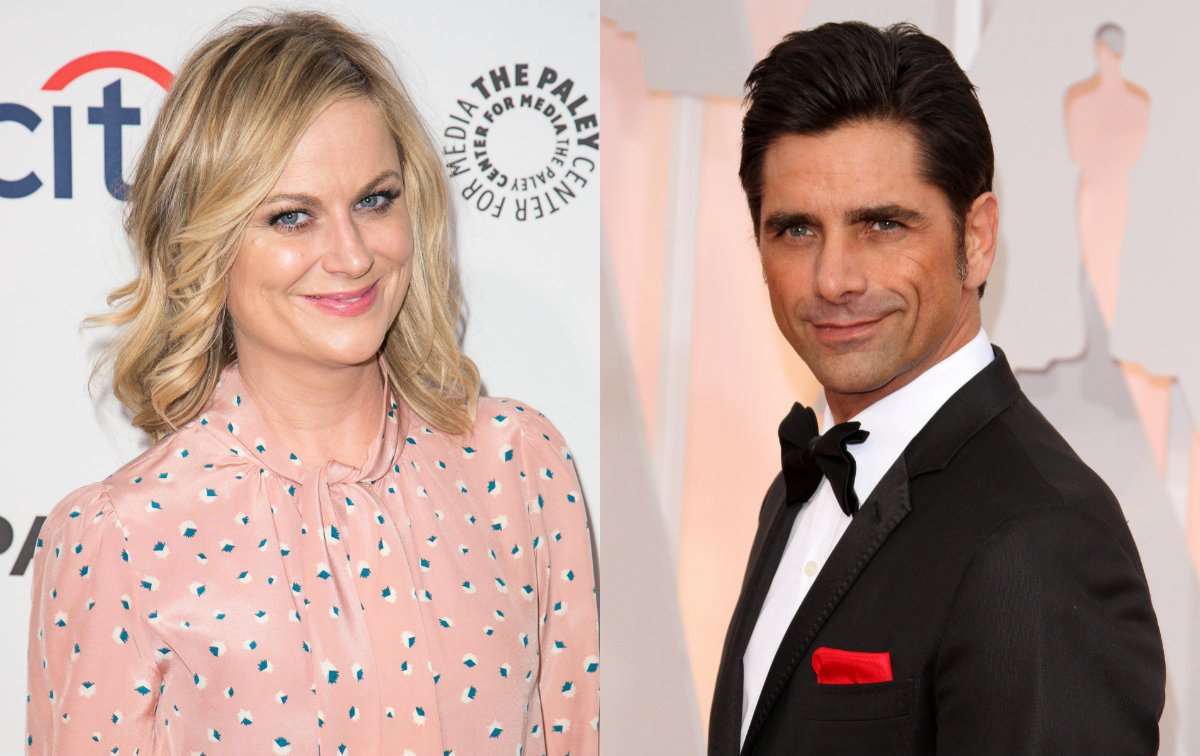 Celebrities are a fickle bunch, especially when it comes to their personal lives. In fact, many of them have past relationships that few of us even know about. Take Amy Poehler, for example. The “Parks and Rec” star admitted to Howard Stern that after her divorce from Will Arnett, she rebounded with John Stamos. Weird!

Another example of a shocking celebrity couple: Pink admitted to Glamour last year that she dated N’Sync member Joey Fatone.

This got us thinking about other stars who’ve dated fellow famous folks in the past, most of whom we’ve either forgotten about as couples, or never knew were couples at all. Read on for some shocking celebrity relationships!

Amy Poehler and John Stamos: After her divorce from Will Arnett, the “Parks and Recreation” star  rebounded with none other than hot Uncle Jessie. Poehler admitted as much on on “The Howard Stern Show,” saying: “We worked on a movie. He did a little bit in a movie that I did and a bunch of us hung out. And then later on he’s like, ‘Let’s go get dinner. And it was fine. I remember thinking like, ‘Oh, s–t. Like, if this is really a date…’ I think I was wearing a Leslie Knope top. I think I was wearing a shirt from work.”

If you’re wondering if anything more happened with Stamos, Poehler assured Stern she “didn’t f–k” him.”

Matthew McConaughey and Penelope Cruz: Did you know that these two hotties fell for each other while they were shooting “Sahara” in 2003? The romance didn’t last, and they split in 2006, because—according to one report—he dumped her for his now-wife Camilla Alves.

Pink and Joey Fatone: In the June 2013 issue of Glamour, Pink opened up about some of her past loves—and this one was a shocker. “Joey Fatone was in love with me,” she said, referring to the ‘N Sync star. “He took me to Friendly’s on a date and he bought me an ice cream. Such a sweetheart. He asked my dad’s permission!” Between her pink hair and his shockingly bad red dye job, we think they would have been an early Aughts red carpet match made in heaven.

Cher and Tom Cruise: Back in the early 1980s, Cher and “Top Gun” hotshot Tom Cruise were a couple. In February 2008 on “Good Morning America,” the iconic singer revealed that he wasn’t a Scientologist when they were seeing each other, and that he was “just the most adorable man you can imagine.”

Ashley Olsen and Lance Armstrong: Lance Armstrong certainly gets around. Between Tory Burch and Sheryl Crow, we weren’t sure there were many high profile ladies left! But back in 2008, he had eyes for a younger A-lister: Ashley Olsen. They were spotted getting hot and heavy numerous times at New York hotspots. We guess blonde fashion designers are his weakness!

Katie Couric and Bob Saget: Couric told Howard Stern she indeed went out on a date with the comedian, but it wasn’t meant to be. He “was fun, he was really fun,” Couric said. “I had fun, I don’t think I did it for him.” As for Saget never calling? “That’s alright,” she assured Stern.

Natalie Portman and Moby: Um, what? Electronic musician and notable vegan Moby dated Oscar-winning actress Natalie Portman back in 2001, long before her “Black Swan” days. They only dated for a few months, but remained close friends after.

Sofia Vergara and Enrique Iglesias: Although Enrique Iglesias’ most famous relationship is with Anna Kournikova—whom he began dating in 2001—he previously dated “Modern Family” star Sofia Vergara. Back in those days, he was the household name—but that’s pretty much changed.

Tyra Banks and Seal: Before he was Mr. Heidi Klum (and before they divorced and Klum started dating her bodyguard), Seal dated Tyra Banks back in 1996. They made one public appearance as a couple at the Essence Awards, and parted ways shortly thereafter.

Ellen Barkin and Johnny Depp: Prior to dating Kate Moss, Depp was involved with actress Ellen Barkin—who was 40 at the time (he was 30). Oddly enough, she actually sort of looked like a 2013 version of Kate Moss back then!

Madonna and Dennis Rodman: The eccentric basketball star and equally eccentric singer had a fling in 1994, and later in his autobiography “I Should Be Dead By Now,” he claimed Madge was desperate for his child. He recalled receiving a phone call from her while he was away, stating: “It was like the ‘somebody died call’ from New York. I picked up the phone and Madonna was like, ‘I’m ovulating, I’m ovulating. Get your ass up here.'”

Helen Hunt and Matthew Broderick: It’s hard not to imagine Broderick trolling the West Village with glamorous wife Sarah Jessica Parker and their adorable kids these days, but back in 1987 he was involved with actress Helen Hunt. The duo obviously didn’t work out—but they remain close friends. On the flip side, SJP dated the late JFK Jr. and Robert Downey Jr. before settling down with Broderick.

Helen Mirren and Liam Neeson: While working on the 1981 film “Excalibur,” Neeson and Mirren struck up a relationship. They even lived together during the early 1980s, and he once told James Lipton on “Inside the Actors Studio” that she helped him score an agent.

Julia Roberts and Daniel Day-Lewis: The famous actors dated for a bit in 1995.

Sheryl Crow and Owen Wilson: While many associate Crow with Lance Armstrong, and Wilson with Kate Hudson, this rootsy couple actually dated for a bit in the early 2000s,

Natalie Portman and Jake Gyllenhaal: It’s hard to not think of him dating Reese Witherspoon or Taylor Swift, but back in 2006, Gyllenhaal was involved with Natalie Portman. If there’s one thing we’ve learned from all this, it’s that famous people really just love other famous people.

Elsa Pataky and Adrien Brody: This is a wild one. Spanish actress Pataky dated Brody, who bought her an actual castle in 2008. According to Hello! magazine, Brody purchased a 19th-century estate surrounded by forest in upstate New York, and girlfriend Pataky by blindfolding her before unveiling it to her on her birthday. When I saw the castle, I asked Adrien, ‘Is this ours?’ the Spanish beauty told the magazine. He said, “Yes – welcome home.” As it turns out, the couple didn’t last, and Pataky married burly actor Chris Hemsworth—the complete opposite of Brody in every way.

Tara Reid and Carson Daly: Back when he was the host of “Total Request Live” and she was actually a working actress, Reid and Daly were a paparazzi favorite. They became engaged in 2000, but ultimately called it off when it was clear that they were a 1990s couple and it was probably best to remain that way.

Alanis Morissette and Ryan Reynolds: Okay, so these two were actually engaged and involved for years, but sometimes we totally forget these Canadian superstars were together. They dated from 2002 until 2007, and Morissette has admitted to writing break-up songs about him. After Alanis, his type seemed to changed drastically, as he married Scarlett Johansson, then Blake Lively.

Which onetime celebrity couple surprised you most?!