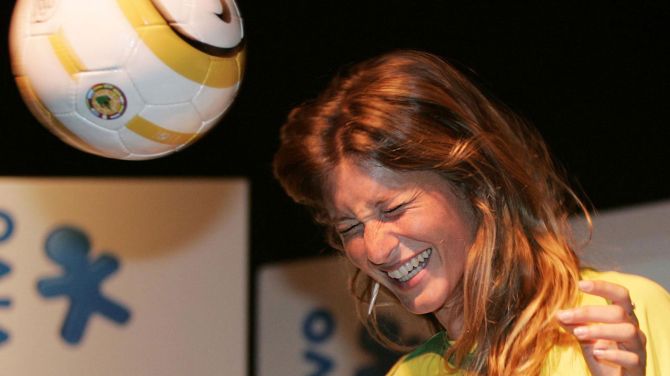 We knew that a lot of supermodels hailed from Brazil, but we never realized just how many until the World Cup rolled around.

Beginning around the first week of June, the Instagram accounts of several prominent Brazilian beauties became tinged with the golds and greens of their national team. And as the Brazilian Football Confederation continues to advance, more and more Victoria’s Secret models and Sports Illustrated alumnae are sporting CBF Jerseys and draping themselves in Brazilian flags — or, in some cases, baring their bikini-clad bodies in support of the home team.

Take a look at the many supermodels who’d be psyched to sit in the stands should Brazil win its sixth World Cup:

Ambrosio, 33, comes from the city of Erechim in Rio Grande do Sul, Brazil. Probably best known for her work with Victoria’s Secret, she was once ranked the 6th highest paid model in the world by Forbes.

Ana Beatriz Barros, 32, has appeared in seven Sports Illustrated Swimsuit Issues since 2002, and hails from the district of Itabira in Minas Gerais.

Bündchen, 33, was born in Três de Maio, Rio Grande do Sul, and is currently estimated to be the world’s highest-paid supermodel. She’s also reported to be presenting the trophy to the winners of the 2014 World Cup in lieu of Brazil’s president, Dilma Rousseff.

Former Victoria’s Secret Angel Izabel Goulart, 29, comes from the city of São Carlos in São Paulo. Despite hailing from Brazil, she became GQ Portugal’s “International Woman of the Year” in 2013.