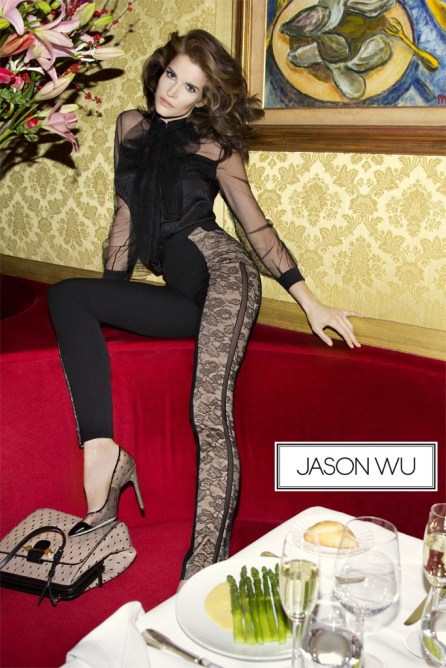 Even if you didn’t see the recent paparazzi pictures of supermodel Stephanie Seymour strutting on a St. Barth’s beach, it’s safe to assume you know that—at 44 years old—she’s still a total knock-out. In fact, she’s such a bombshell that designer Jason Wu tapped Seymour to appear in his Spring 2013 campaign, citing her undeniable sex appeal.

“I wanted to cast a strong woman with definite sex appeal for my spring collection which was partly inspired by Helmut Newton’s provocative photographs,” Wu told Women’s Wear Daily. “Stephanie came to mind as the perfect muse for this collection and the fact that she has worked with Newton just made perfect sense.”

The images, according to WWD, were shot by esteemed photography duo Inez van Lamsweerde and Vinoodh Matadin and were taken at legendary New York City restaurant La Grenouille—and from what we’ve seen so far, they’re captivating, to say the least. Apart from Seymour’s come-hither gaze and sleek Wu clothes, it’s the use of the classic restaurant setting that really tells the story, making it one of our favorite Spring ’13 campaign images to date.

Pop culture junkies may recall Seymour’s turn as a doomed bride in Guns N’ Roses’ epic 1991 music video for “November Rain” (she was dating lead singer Axl Rose at the time), but before that, she rose to fame as a model, appearing in several issues of Sports Illustrated, the cover of Vogue, and was a lingerie model for the then-new label Victoria’s Secret. She’s also the mother of five kids, including social scene fixtures Harry and Peter Brant, whom you may recognize from the gazillion headlines they’ve generated lately for their oh-so-interesting behavior and off-color social media comments about President Obama’s fate due to his fiscal position.

RELATED: Your Guide To All The Spring 2013 Fashion Ad Campaigns