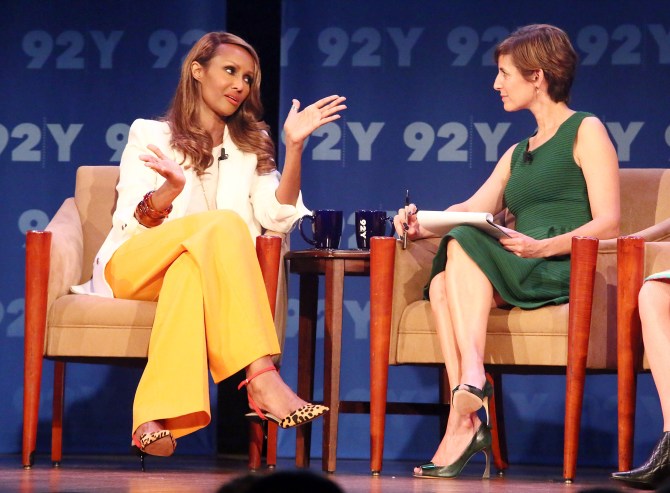 And while each woman offered valuable bites of information from their personal experiences—including Coco, who emphatically defended her infamous reputation for being a demanding diva on set, asserting “you have to hold to yourself and stand for what you stand for”—the conversation was dominated by supermodel Iman, who served up useful pieces of wisdom about success (the model’s company, Iman Cosmetics, was founded in 1994, and was the first ever to design a line of products for women of color.)

Read through Iman’s top five tips for working women below!

1. Look for what’s missing and create it.
“My third day in New York, I went on a shoot for American Vogue. I was 18 and had never seen a fashion magazine before and had no idea what to expect. It was me and one other Caucasian model. The makeup artist asked me if I had brought my own foundation, and I had no idea what he meant because I had never worn makeup before in my life, but I knew it was odd because he didn’t ask the other model.

I told him no, and he mixed together some colors to use on me. After that shoot I was terrified to show up without my own foundation, so I went to every store I could find and bought different colors and started mixing them together. That’s how I became so good at mixing colors.”

3. Believe it.
“I think it’s such a female thing, we look at ourselves in the mirror and we pick, pick, pick. First and foremost, you have to believe in yourself and believe in what your business is about. They say beauty is in the eye of the beholder, so let the beholder be you.”

4. Focus your efforts.
“After I quit modeling, it took five or six years before anyone took me seriously. So what I did was I divorced myself from my industry; I still got invites to all the fashion parties, but I said no. I only went to executive business events that would further my career and my business. I had to make the tough decisions. I almost lost my business twice in my career, and it was because I took my eye off the ball and tried doing things that were not what my business is about. Don’t compete with the Joneses.”

5. Ask to be mentored by other women.
“You will not believe what will happen when you simply reach out and ask for help. Ask to be mentored by other women executives. Of course, make sure you’re asking the right people! But don’t be afraid to ask for help. Coco reached out to me once over Twitter and I responded. And now I say I want to be Coco Rocha when I grow up!”

Head to Twitter and search #startupsecrets to learn more wisdom from all the ladies!

MORE ON STYLECASTER:
5 Models We Think Should Join Naomi Campbell On ‘The Face’
Designer Norma Kamali On How to Start Your Own Business
Coco Rocha Is A Jehovah’s Witness, Refuses To Pose With Religious Symbols
The Lazy Girl’s Guide To Going Green: 25 Simple Tips and Tricks