Unless you’ve been living under a rock, you know that the Super Bowl is happening this Sunday, an occasion typically marked with  parties that feature heaps upon heaps of amazing junk food—from chips to chili to cheese dip.

We might not be sports fanatics, but we are most assuredly snack fanatics, so we took it upon ourselves to attempt one of the dazzling Super Bowl party food suggestions we’ve been seeing crop up all over Pinterest—the snack stadium.

According to social media, the snack stadium is the thing to have at your Super Bowl party this year, so we decided to try to make one ourselves and see how hard it really is. To be honest, it’s not as tough as we’d initially suspected — though we’ll admit we took a few shortcuts to save time and money (and you should, too!).

Here’s how we built out StyleCaster Snack Stadium in just four easy steps … and about $115. 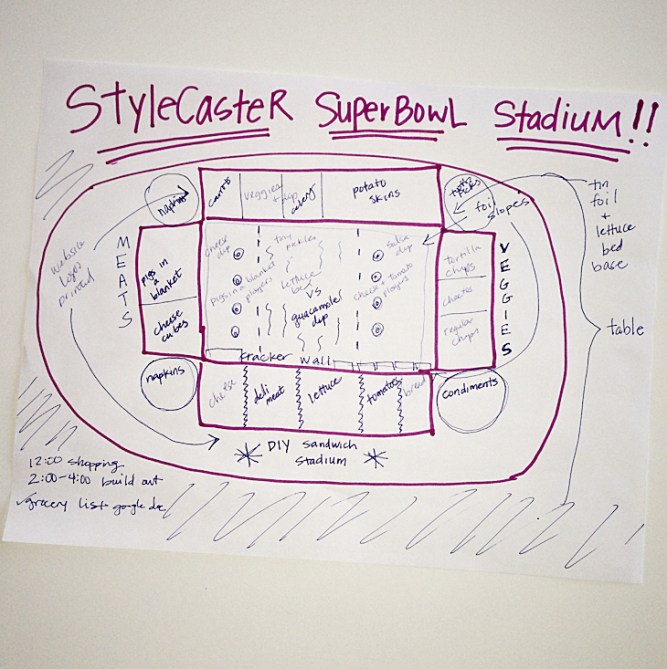 Planning is everything, people: When getting ready to build your own food stadium, channel your inner Frank Gehry and put pen to paper.  The biggest thing you need to worry about is your grocery list—no one wants to have to go back for more food once you start building—and a well mapped-out stadium will help you flesh out your shopping list.

To cater to both carnivores and vegetarians, we chose an overarching theme of Meaties vs. Veggies.  One end of the stadium was made of pigs in a blanket, deli meats, salami, and pepperoni; while the other end was blanketed in a bed of lettuce and piled high with mozzarella sticks, tomatoes, carrots, celery, and Bagel Bites.

One length of the stadium was a DIY sandwich bar flanked by condiments, while the other length of the stadium featured a variety of carbs and starches—from chips to Extra Cheesy Cheetos.  The playing field was made of a guacamole spread, bookended with end zones of salsa and ranch dressing.  To top it all off, we used toothpicks to fashion football players out of pigs in a blanket and cheese cubes. 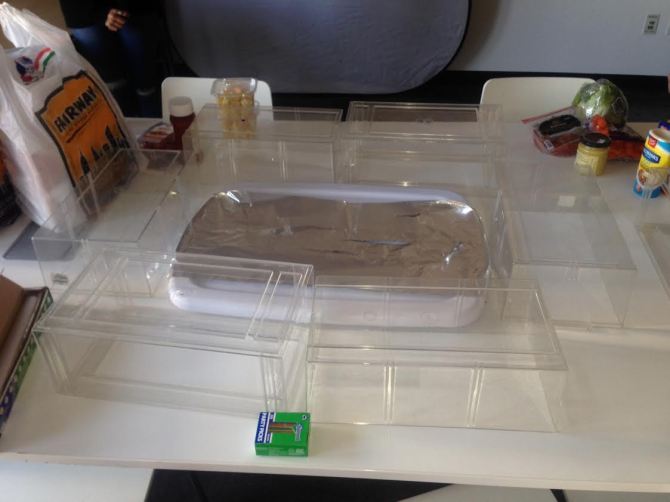 There are some food stadiums out there built solely of stacked sandwiches and copious amounts of food, but as rookie food architects whose budget hovered around $100 (if we aren’t going to be waist-friendly, we might as well be wallet-friendly, right?) we figured we’d cut time and cost by creating an infrastructure to build upon.  A plastic bin lid served as our football field, with four open storage container drawers as stadium walls (taped to the table for stability!) .

We then blanketed the entire set-up with heavy-duty aluminum foil, layered at a slant to get that stadium seating feel. We also created half-inch tall dividers to keep the sauces from blending.

The main idea here is to create something to pile and build food around, so you can really use any materials you find lying around that mock the shape and scale of a football stadium.  Get creative and look around your kitchen for stadium building supplies to save even more cash … that you can then spend on Cheetos. 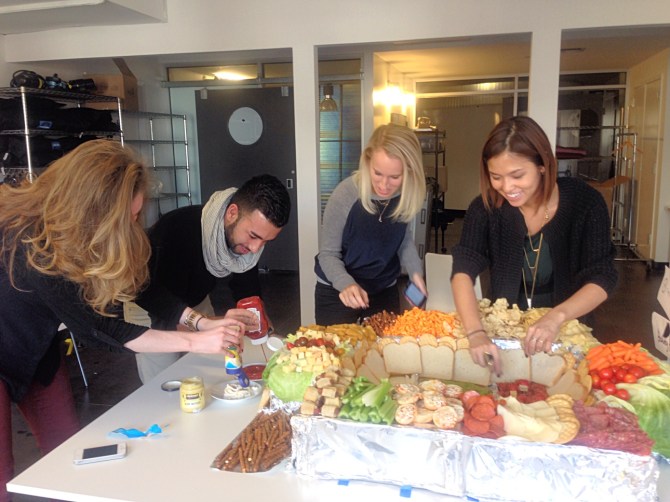 Get your friends and get involved making your snack stadium dreams come true.  Follow the plan, pile it high, and don’t be afraid to do some taste tests along the way. After all, when was the last time you had a Bagel Bite—1998? Pro tips: A dab of mayonnaise will help your bread walls stick, and rounded crackers tucked behind the slices makes for some beautiful scalloped arches. 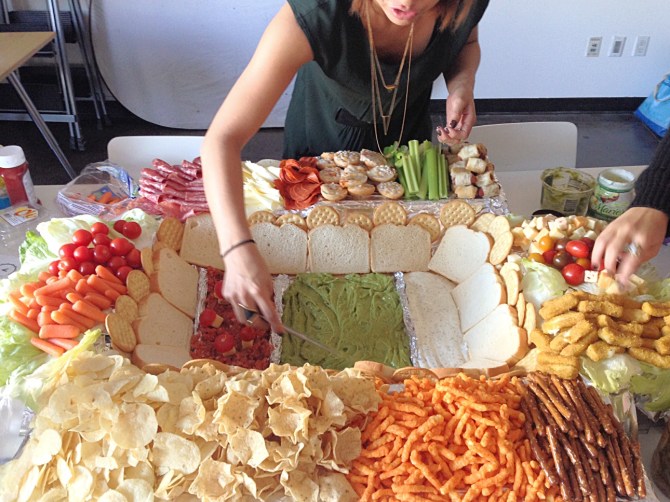 If nothing else, this snack stadium DIY convinced us that if guacamole has been smoothed out enough, it can become an exact replica of the AstroTurf at MetLife Stadium.

Step 4: Add embellishments and dig in! 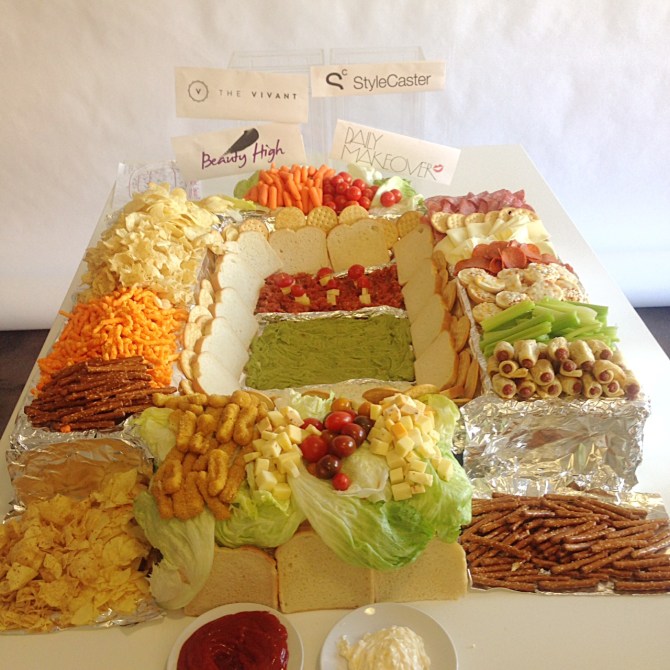 We started building our snack stadium at 3 p.m., and after about 20 minutes—which, of course, included taking photos on Instagram every few minutes—our culinary masterpiece was complete! Our snack stadium ended up being enough for about 25 people to snack on, making the investment around $4.60 a head. Not too shabby!

We highly encourage you trying this at home — and tag your snaps with the hashtag #SCSnackStadium so we can see how yours turn out! Happy SuperBowl!

Not pictured: Tostitos avalanche, mustard splatter, and pile of editors on the floor with a severe case of food coma.