After she accused Adam Levine of cheating on Behati Prinsloo (and asking to name his unborn baby after her), the internet is wondering: Who is Sumner Stroh?

Sumner, a model, went viral in September 2022 after she posted a TikTok video, in which she claimed to have a year-long affair with Adam while he was married to Behati. She also claimed that Adam asked Sumner to name his and Behati’s third child after her after their affair ended. “Essentially, I was having an affair with a man who is married to a Victoria’s Secret model,” Sumner said. “At the time, I was young, I was naive. Quite frankly, I feel exploited. I wasn’t in the scene like I am now, so I was definitely very easily manipulated.”

Adam and Behati married in July 2014 after almost two years of dating. They welcomed their first child, a daughter named Dusty Rose, in 2016. Their second child, a daughter named Gio Grace, was born in 2018. News broke that Adam and Behati were expecting their third child together after the Victoria’s Secret model was photographed with a baby bump in Santa Barbara, California, in September 2022. Days later, Behati confirmed the news with an Instagram photo of her and her baby bump. “Recent,” she captioned the post.

In an interview with Entertainment Tonight in November 2021, Behati revealed that she wants five children with Adam. “We always knew we wanted a second one,” she said at the time. “So I think for me … when I had two babies under the age of 2, I was just like, ‘Don’t even think about it!’ I do also want five kids. But don’t even think about it.” She continued, “Never say never. We want a big family. Who knows? We’re leaving it up to fate and just what happens. What will happen, will happen. So there are no limits to it.” Behati also confirmed to Entertainment Tonight at the time that she and Adam were thinking of having a third child. “I think it’s just kind of where we are in our life. And with COVID too, I was just seeing [my daughters] together, like, ‘Maybe we should have a third just to have more kids.’ Because it was so sweet to see [them together]. But then, I don’t know. Never say never,” she said.

But back to Sumner Stroh. So who is Sumner Stroh? Read on for what we know about the model who accused Adam Levine of cheating on his pregnant wife and the alleged DMs she’s shared of their affair.

Did Adam Levine cheat on Behati Prinsloo with Sumner Stroh? 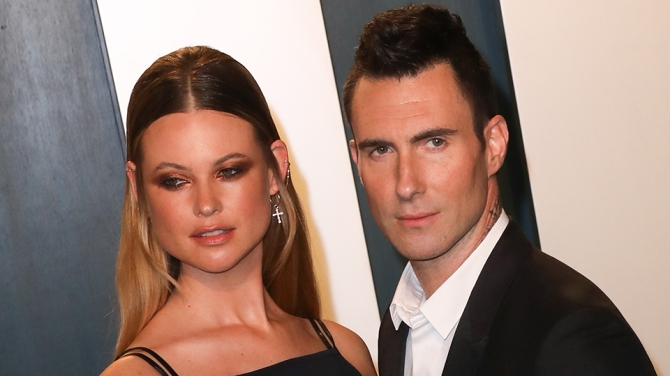 Did Adam Levine cheat on Behati Prinsloo with Sumner Stroh? Less than a week after Adam and Behati announced they were expecting a third baby, Sumner, an Instagram model, posted a TikTok video in September 2022, in which she claimed she had an affair with Adam and he asked to name his baby after her. “Essentially, I was having an affair with a man who is married to a Victoria’s Secret model,” Sumner said. “At the time, I was young, I was naive. Quite frankly, I feel exploited. I wasn’t in the scene like I am now, so I was definitely very easily manipulated.”

Sumner then shared a screenshot of direct messages between her and Adam. “Seeing u in person I was like…I’m fucked,” Sumner wrote to Adam, who responded, “You are 50 times hotter in person. And so am I.” Sumner continued in the TikTok, “Adam and I were seeing each other for about a year. After I stopped talking to him over a period of months, this is how he came into my life.”

Sumner then explained why she went public with her story. “I wanted to deal with this privately. I never wanted to come forward because obviously I know the implications in doing what I do, making money the way I do and being an Instagram model, so being tied to a story like this, I know the stereotypes,” she said. “I had sent some screenshots to some friends I thought I trusted and one of them had attempted to sell to a tabloid. So here I am.” Sumner captioned the TikTok, “embarrassed I was involved w a man with this utter lack of remorse and respect.”

@sumnerstroh embarrassed I was involved w a man with this utter lack of remorse and respect. #greenscreen ♬ original sound – Sumner Stroh

After she posted the TikTok, Sumner wrote on her Instagram Story: “Aware many people will try to fill in the gaps with many false assumptions. I don’t feel like I’m doing any favors, considering the manner this had to go about. It’s a lot to digest but hopefully, at the very least, the truth being out can do some good.”

Who is Sumner Stroh?

Who is Sumner Stroh? Sumner is a model with around 340,000 followers on Instagram and around 320,000 followers on TikTok. She’s represented by Verge Agency, which also represents stars like Austin Mahone, Pia Mia and Levi Conely. According to her Linkedin, Sumner attended The University of Texas at Austin from 2016 to 2020 and worked as a media manager at Bumble and a digital influencer at Boohoo while she was still in school. She is also the marketing manager of the accessories brand, Strung by Stroh, which her sister, Baylen Stroh, launched in 2019. “I created the college ambassador program and manage it. I seek out influencers to work with to create website, social media traffic and sales,” Sumner’s Linkedin reads.

Along with her Instagram and TikTok, Sumner also runs a YouTube channel with 6.25 thousand followers, where she posts clothing hauls, vacation vlogs and beauty videos. Sumner also has a free OnlyFans page, where she’s shared more than 250 posts. “Never say never lol. Now the only place you can access my exclusive content!!! Let’s get to know each other 💓” her OnlyFans bio reads. In her OnlyFans bio, Sumner also shared a link to her Amazon wishlist
, which includes a Canon camera for $439, a diamond bracelet for $644 and a kitchen utensil set for $31. “Thank youuuu! Appreciate y’all,” the description of her wishlist reads.

How old is Sumner Stroh?

How old is Sumner Stroh? Sumner’s birthday is August 10, according to her Linkedin. She celebrated her 21st birthday in August 2020 with a trip to Cabo San Lucas, Mexico, according to her YouTube, which makes her 23 years old—20 years younger than Adam. “BIRTHDAY GIRLS!!!!!!!!” Stroh captioned an Instagram post in 2022.