When you have a black thumb (hi, me), the thought of attempting to care for a single, low-maintenance plant can be mildly stressful. I bought my first houseplant a few months ago after seven years in NYC, and the fact that it hasn’t given up on life yet makes me feel vaguely domestic—kind of like I do after throwing in a load of laundry. Adult self care task: check!

The flourish of color and vibrancy that plants bring to our homes isn’t just visually appealing—though it’s definitely that—it’s also proven to be good for us. Studies have shown that having plants in a space can help you concentrate, keep you calm, make you more productive, boost compassion, and improve your mood. When you consider that succulents do all that awesome stuff, while being exceedingly hard to kill, it makes sense that they’ve become one of the trendiest plants over the last few years—a favorite to put in the center of hipster restaurant tables as a rustic touch, an Instagram darling.

“I think California tends to lead the trends in current gardening,” says professional botanist Jennifer Lee Segale, owner of Wildflower Farms, a Northern California-based organic landscape design and consulting company. “Succulents and other drought-tolerant plants are hugely popular on the west coast, and combined with low maintenance and their easy-to-grow nature, they have been a big success. Beyond functionality, succulents are gorgeous! Their bold, structural forms add punctuation to any garden or—with some varieties—indoors.”

Here, a few pointers from plant professionals about how to create and care for your own succulent collection—and, below, a full A to Z guide of different succulent varieties.

MORE: How to Decorate According to Your Zodiac Sign 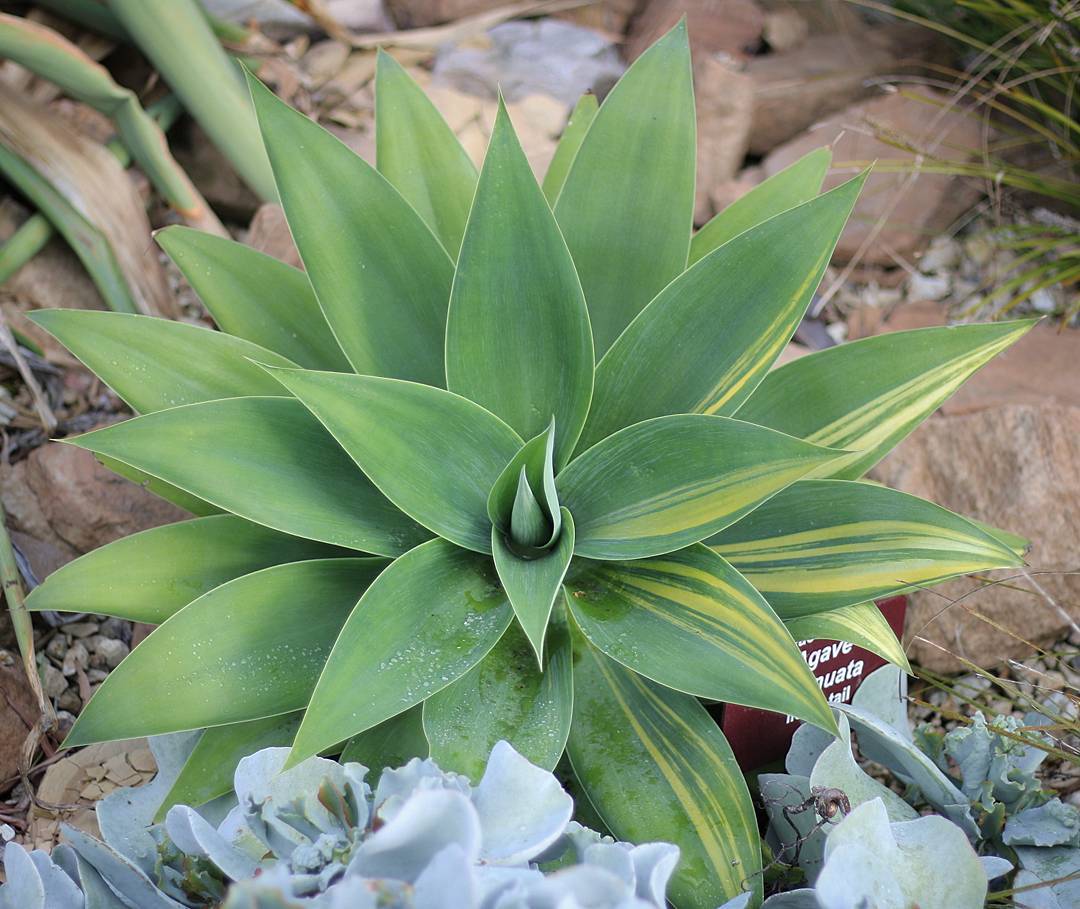 There are about 60 different plant families that contain succulents, so you’ve got plenty to choose from. “I love growing Agave and Echeveria—those would be my top two favorite succulents,” says Lee Segale. “Echeverias—pictured below—are a large plant family with many species to pick from. A couple of my favorites are Echeveria sedoies and Echeveria subrigida. In the Agave family, no garden is complete without Agave attenuate—pictured above. Both of these types of succulents can grow easily in the ground or in containers, thriving on full to part sun and mild watering.”

And if you decide to buy a succulent outside of those two families, you’ll probably find that most are just as easy to care for. “Some other common varieties of succulents include sedums, crassulas, aeoniums, sempervivums, and aloes, some of which are pictured below—and each of which include many species,” says landscaper Cody Beathe, owner of Kaprielia Growers, a Northern California-based succulent nursery. “Though there are many more, they are all very similar in terms of care: Easy.” 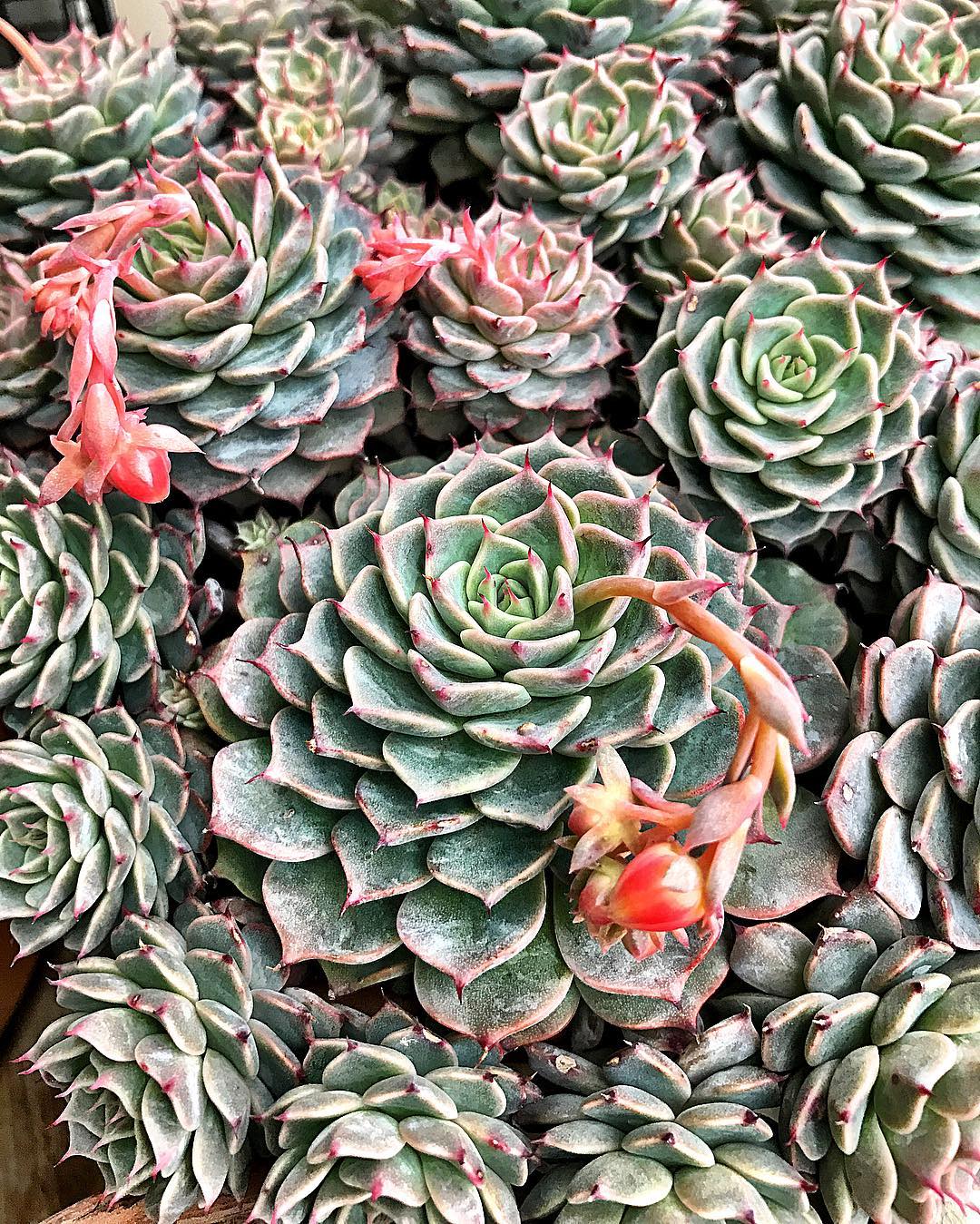 Succulents are very hard to kill—but one way of doing it is by being overzealous about watering. “Succulents, once established, require little to no water,” says Beathe. “So when a water-starved California lawn is replaced with succulents, it saves a lot of water!” Beathe’s no-brainer tip for how to figure it out if you’re not sure whether your succulent is thirsty. If you pick up a potted succulent, and it feels light as air, it could probably do with a little sprinkling. 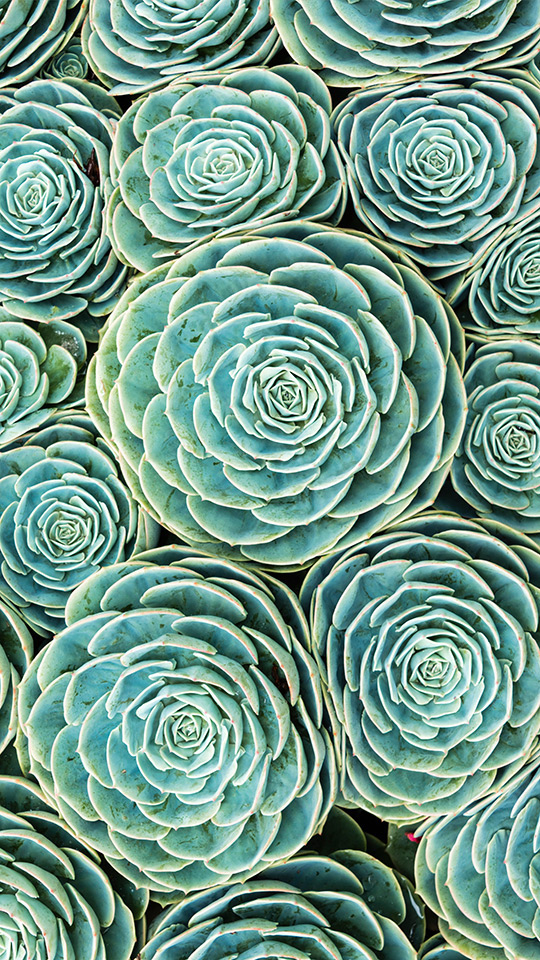 Give Them Plenty of Sun.

“Generally speaking, succulents are incredibly easy to grow, thriving in full sun, with minimal fertilizing, good drainage and minimal watering,” says Lee Segale. Beathe explains that some varieties are used to hotter climates, but that doesn’t mean they can’t handle a little cooler weather. “Some succulents, such as aeoniums, come from areas that never dip below around 40 degrees. They’re frost sensitive and need to be planted near the house or if it goes below 32.” No need to overthink it, though. “Though our climate may vary from their native habitat, most succulents have no trouble living in a temperate winter rainfall environment,” he says. “Agaves, for example, are accustomed to summer rainfall, but when left alone in winter rainfall, they do just fine! They’re hearty buggers.” 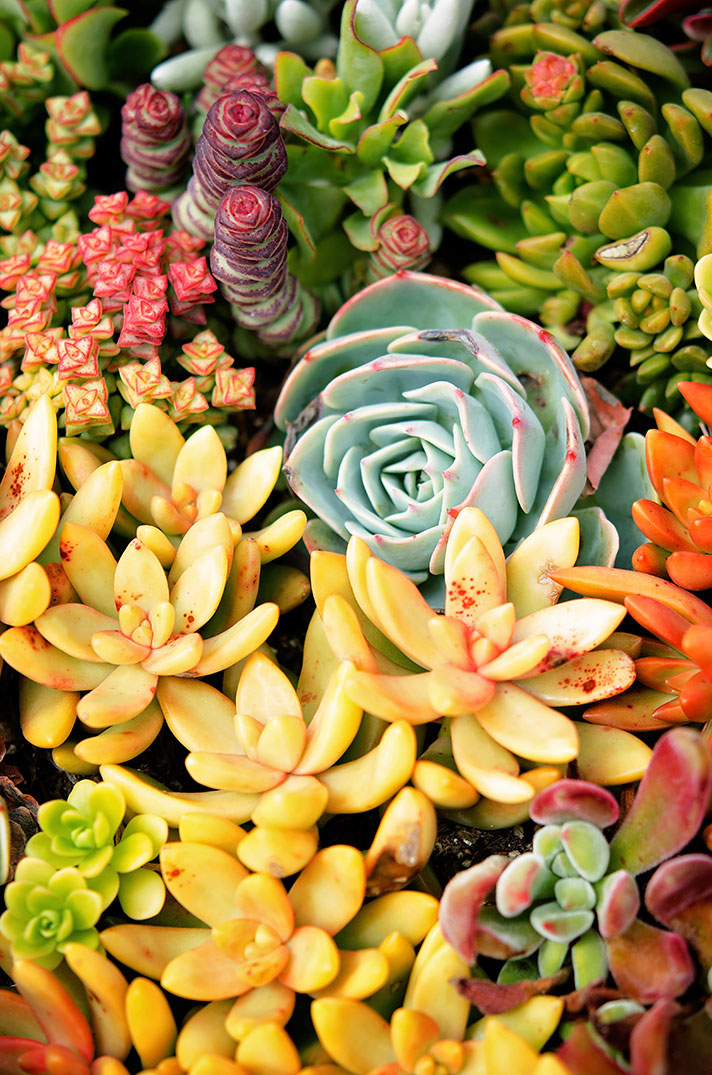 Keep Them in One Place.

It seems like once a succulent finds a home, it likes to stay there. “They hate being moved around,” he says. “And if you do happen to have a succulent in the shade and want to move it to a sunnier area, do it by degrees. They need to be slowly adjusted so as not to burn.” Once you’ve made your succulent comfortable, it should thrive. “Once they’re established, your succulents will reproduce, throwing off shoots of new plant babies,” says Lee Segale. “Feel free to twist, dig out, or cut these off and plant them in a new container or in ground.” 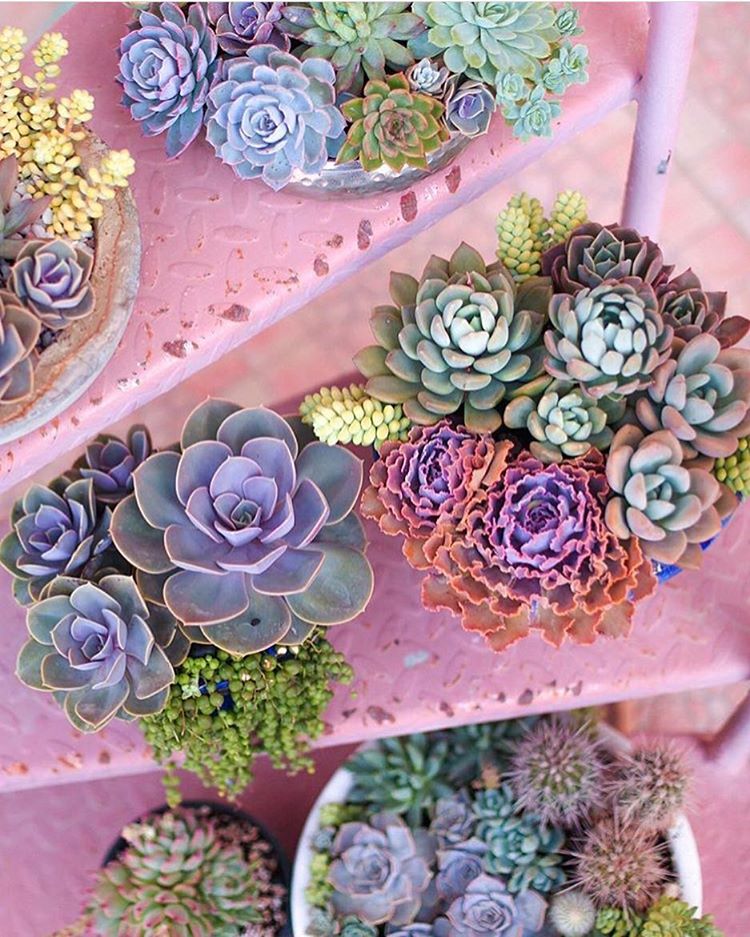 Aeoniums and sempervivums by @leafandclay

Be Careful if You’re Growing Them Indoors.

Succulents prefer to live outside, but many can survive just fine in your house under the right conditions. “If you’re planting them in containers, be sure to mix a little gravel in the soil for good drainage, and top dress with a compost or aged manure,” says Lee Segale. “Succulents do not like to grow indoors, but you can get away with it in some varieties. Anyone really can grow a succulent—and that’s not easy to say in the garden world.” 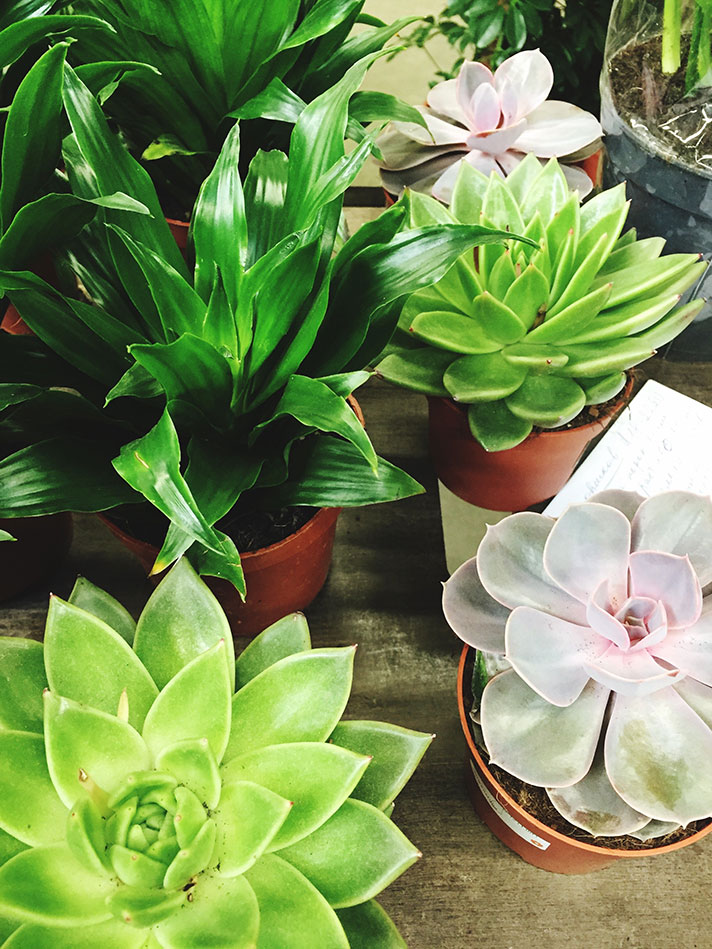 MORE: 7 Things to Know Before Buying Your First Home

Also known as “medicine plant,” aloe vera has thick, pointy leaves that contain a gel-like substance that can be used to soothe cuts, burns, and heartburn.

Also known as “donkey’s tail,” the burro’s tail resembles grapes on a vine, with leaves that can grow up to 10 inches long.

The Christmas cactus, which also goes by a slew of other holiday-related terms, gets its name because the plant blooms around Christmastime.

The ebony wax agave grows in rosette clusters of up to 12 inches wide. The plant's gray-green leaves have dark red edges that turn red-pink with yellow tips during winter.

Fairy castle cactus is a five-sided, slow-growing succulent that can reach up to six feet tall, and occasionally produces white and yellow flowers.

The golden powder puff is a small, globe-shaped plant that produces yellow flowers at the top and yellow spikes allover its body. It doesn't need as much sunlight as other plants, but requires more water than the average succulent.

Honey Bunnies can typically be found backyards in the American Southwest and produce yellow flowers followed by red fruit.

This is a tree-like succulent that grows quickly and produces small, star-like yellow flowers that emerge from the center of its leaf rosettes.

This plant grows best in winter and has leaves that are densely covered in gray, white or blue tubercles. Yellow or orange flowers will emerge from the center of the rosette.

The Kenyan dragon flower is a tropical plant with five angled stems that produce red-purple star shaped flowers from June to October.

A slow-growing plant, the leather plant has ovate shaped leaves that are bronze or grey with fine, cinnamon-colored hairs. In the spring, bright yellow flowers appear.

This is an exotic succulent with snake-like branches that can grow up to a foot long. Unlike most succulents, the Medusa’s Head does not handle droughts well, so needs frequent watering in the summer.

Also known as "string of buttons," the necklace vine is a small plant with star-shaped leaves edged in pink.

The orchid cactus has flat, triangular stems and produces funnel-shaped pink flowers during the spring and summer.

The painted lady is a green perennial with frosted leaves. It blooms in the summer with bell-shaped yellow flowers and in winter with red tips.

The Queen Victoria agave is a slow-growing, perrennial succulent whose harp thorns can sometimes injure people.

Also commonly known as "pagoda village," the red pagoda is a branching perrennial succulent that earned its name from its pagoda-shaped red leaves. Tiny, white flowers may grow at the ends.

The sweetheart hoya is a climbing plant that can reach 13 feet tall. Its leaves are thick and heart-shaped and can grow dozens of small, star-shaped purple and white flowers.

Blue agave grows into a large succulent with spiky blue-green leaves over seven feet tall. At around five years old, the plant sprouts a stalk topped with yellow flowers that can grow an additional 16 feet.

Also known as the "African aloe," the uitenhage aloe is a branchless, tree-like plant that can reach up to six feet. An additional three feet is added, thanks to the plants flowering, which usually happens mid-winter to early spring.

The viviparous foxtail cactus goes by a bevy of other names including "beehive cactus" and "pincushion cactus," and has a spherical or oblong shape covered in star-like, white spines. Yellow, purple, or pink flowers bloom up to 15 centimeters across the top.

The watch chain grows in an intricate bush format with a maximum height of 20 centimeters, and when its small yellow-green flowers appear, the plant can produce a pungent, acrid smell.

This is also known as "silver dollar plant," and has thick round leaves. Xerosicyos danguyi has a high tolerance for hot, dry environments and only needs to be throughly watered once a month.

The yellow carrion flower is characterized by stems with strong angles and teeth. The yellow-golden colored flowers form in clusters.

One of the most beautifully flowering huernias, this perennial succulent produces five-pointed, yellow, star-shaped flowers banded in a coppery brown with a dark red rim.

How to care for succulents | @stylecaster

25 Perfect Outfits to Get You Through the Holiday Season