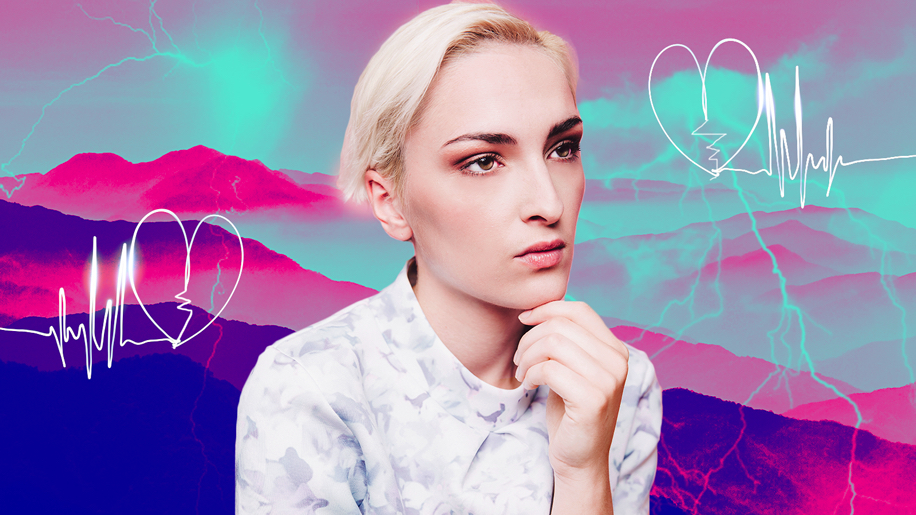 You could be sabotaging your relationship without even knowing it. (Getty Images/StyleCaster)

If your quest to find “the one” seems more impossible than climbing Mount Everest in heels and the dating game makes you feel as hopeless as Britney circa 2007, it could be all in your head. Literally. That’s because what’s going on in your subconscious mind—the part of your brain that’s essentially a large database of memories—could be putting a serious wrench in your love life.

“It’s amazing how much force our subconscious mind has over our lives, especially when it comes to relationships,” says licensed marriage and family therapist Dr. Paul Hokemeyer. “This would explain why even though we desperately want an intimate relationship on the conscious level, we unconsciously sabotage them from moving forward.”

Subconscious sabotaging—believing you’re not being good enough, saying you’re too busy, or deciding there are no good men out there—can permeate your life, even if you don’t realize it, says relationship coach Marni Battista of Dating with Dignity. “[These thoughts] get leaked into everything we do in both verbal and nonverbal situations and inevitably drive men away.” We’ve outlined six common factors that could be stunting any advancements in the love department.

Problem: Being hung up on the past.
Former relationships can seriously influence how we subconsciously enter into new relationships, because we end up mulling over past mistakes: Why did I say that? Was I too needy? “We run around our brains so much that we can’t get past it enough to consider a new relationship as a do-over,” says psychologist and radio host Dr. Cooper Lawrence.

Translation? We end up projecting the sins of the past on the next person, who doesn’t stand a chance, even if that person is Ryan Gosling waiting at your front door with chocolates and wine.

Solution: Allow yourself to be vulnerable in a relationship where you really, really trust the other person. “This ‘therapeutic relationship’ provides a secure frame to test and discard negative feelings and reactions,” says Hokemeyer. “Just as our central nervous system got wired to avoid intimate relationships, it can be rewired to connect in them,” he says. The key is to move slowly in the new relationship. Remember: baby steps.

Problem: Having the unconscious urge to argue.
Do you always feel the need to contradict every point someone makes, like pointing out it’s actually Kendall Jenner, not Kylie, who’s hitting the runways big-time? “There are some people who like to be right all the time and make others feel stupid for not thinking exactly how they think,” says Dr. Lawrence. These people are hard to have a conversation with, let alone a long-term relationship.

Solution: Ask yourself where the root of this urge is coming from. Maybe it’s stress from work, problems with friends or family, or bad habits from past relationships. Regardless of the source, Dr. Lawrence urges people to take the energy they may get from the drama of an argument and channel it into their careers, working out, or a new hobby.

Problem: The all-consuming desire to be right.
This one’s a self-fulfilling prophecy, says Battista. When we have an unconscious need to be right, we’ll find proof that justifies our beliefs. “If I tell myself ‘online dating sucks,’ then I will unconsciously be logging on to collect evidence I am right,” Battista says. “We’re pretty much setting ourselves up to fail in every single dating interaction.”

Solution: Practice open-mindedness. Remember that a big draw of being in a relationship is the opportunity to learn and grow (in a nontacky way, of course). That means stopping to take a second before you judge or fire back. Keep a healthy distance from your beliefs, and you’ll start to distance yourself from defensive patterns that just don’t achieve anything.

Problem: Coming on way too strong.
You may not even realize you’re doing it, but your date sure does. If you’re babbling away about the dreams for your future wedding and kids on Date Number One, don’t expect Date Number Two. “The first three months should be fun, light, and getting to know each other,” says Dr. Lawrence, adding that it’s OK to start some serious talk after the three-month mark. “But if you do it on the first date, you’re almost guaranteeing it won’t happen.”

Solution: Avoid talking about the big things—marriage, kids, a house—until the relationship feels stable enough to bring up such serious topics, advises Dr. Lawrence. Take the time in the beginning to get to know who he or she is and what he or she likes. If things go well, you’ll be able to gauge when and if it is a good time to start talking about how many kids you want—it could be six dates or six months.

Problem: Being a Debbie Downer.
Would you put up with someone talking about all the things they hate in the world and everything that bothers them? If the answer is no, odds are that your date doesn’t want to hear you go on a diatribe about why nonorganic kale will lead to the fall of civilization. What’s worse is that being a downer implies you lack the confidence to be a good partner. “Positive women come across more confident, and that is a huge turn-on for men,” Dr. Lawrence adds.

Solution: Ditching the negative attitude may require a lot more cognitive effort on your part. You know that saying, “You are what you eat”?  The same applies here. If you’re a regular Negative Nancy, your outlook is going to be negative. Dr. Hokemeyer recommends changing your thought pattern to where you’re literally focusing only on the positive. Changing your mind may just as well change your overall attitude.

Problem: Having low self-esteem and high self-doubt.
Behold the biggest saboteur of all: telling yourself “I’m not good enough.” Doing so makes you doubt your abilities to get and maintain a new relationship. Not only that, you may have unrealistic expectations of a potential partner because you think you don’t deserve anyone worth having.

“It’s critical that we become able to manage this mentality and build a strong foundation of self-worth vs. self-esteem to be capable of receiving love in an intimate relationship,” Battista says.

The Solution: Recognize your inner critic when it starts creeping up inside. Try adopting a “zero tolerance” policy for those nagging voices and self-destructive thoughts; don’t let them control your life, and focus on the positive.