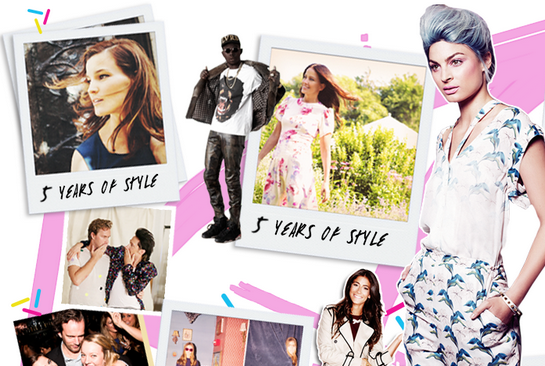 This week, we’re celebrating StyleCaster’s fifth anniversary with a look back at some of our most memorable pieces. From original editorials and celebrity shoots to staffers’ musings on what makes our company so special, it’s time to commemorate the fun-filled (and at times crazy) journey we’ve gone on to get here. Read on for some of our favorite content, and join in on the conversation on Twitter using the hashtag #SC5thBDay!

One thing that’s so wonderful about working at StyleCaster is the fact that we’re a team in every sense of the word. Yes, there’s a CEO, a president, and editors at varied levels, but you’ll never find anyone around pulling rank. We all write, edit, brainstorm, and help out where we can. Even our Junior Team Members (other might refer to them as interns, but not us!) are immersed in every hand of the business—from assisting at celebrity shoots to producing their own original content.

So, in honor of our fifth birthday, we decided to chat with some former StyleCaster staffers who shared their favorite memories from the last five years. Read on for more!

Maverick Carter, Co-Founder and Founder of LRMR Marketing: “From an idea in my office based around the question, ‘What’s the weather and what do I wear?’ it’s amazing to see StyleCaster now be a major player in the style industry.”

Brandon Perlman, Co-Founder and Partner: “I have a digital archive from ‘the early days,’ and here’s just a small indication of the commitment from the group early on by the numbers. [The other founders] and I all had full time jobs, and even with that, there were 851 emails exchanged between October 18, 2006 and the opening of the office. Also, 60 is the amount in dollars we paid for the StyleCaster.com domain on November 13, 2006. No numbers can equate what that’s worth now, to me, to the founders, and to you all, our family.”

Megan Branch, Former Experience Producer: “My favorite memory was when a girl (I think she may have been interviewing for a job) walked right into the glass door because she “didn’t see it”! That was a MESS. I heard that the same thing happened a little while ago, so I guess she wasn’t alone in her ridiculousness. I also loved stepping and tripping over 890 JTMs on the way out of the office and the neverending bathroom key confusion—pink is for girls, blue is for boys…how is that so difficult?”

Marni Golden, Former Editorial Director: “Happy fifth birthday, StyleCaster! I’ll never forget Ari [Goldberg, CEO] and I playing tug-of-war over his vanilla milkshake in the back of a rental car in Austin at 2 a.m. during SXSW. Needless to say, it ended up all over the floor…and Ari’s face.”

Brette Allen, Former Senior Account Executive: “My favorite memory is being a part of a sales team that grew from 5 to 25 and still felt like family.”

Corey Kindberg, Former JTM: “I think my favorite StyleCaster memory would be the time spent with everyone in the office. Each day was filled with laughs, lessons and good fashion. I wouldn’t trade my experience with StyleCaster for all the vintage Chanel bags in the world.”

MICK (Formerly Mick Boogie), DJ and Creator of StyleCaster’s Fashion Week Soundtrack “Sounds from the Front Row“: “StyleCaster, hands down, has been one of my favorite success stories to watch. Our paths are almost identical—ambitious kids from Ohio who dreamed of moving to NYC and winning. Years later—here we are!”

Susie Gertner, Former “What’s Next” Editor: “We had ‘Step Up’ star Jenna Dewan in the studio for a Beauty High shoot in the summer of 2012. As I was walking back to the office from lunch, I noticed a beefy caucasian male with a baseball hat and backpack on. He seemed to be loitering around in front of the office looking a bit lost. I went into the office to drop off some stuff at my desk, and then had to step back out in the foyer of the building. In the corner of my eye I saw this same beefcake-on-a-stick of a man looking at the building directory. And with a quick side glance, I realized it was Mr. Jenna Dewan aka Channing ‘Magic Mike’ Tatum.”

Taylor Droddy, Former JTM and Beauty High Contributor: “Getting the chance to work with Annabel Tollman is one of my favorite StyleCaster memories. She was the first major stylist I ever worked with and it was great to see her process firsthand. She was genuinely enthusiastic about the story.”

Matthew Miller, Former Account Manager: “My fondest memory of StyleCaster was my first day as a JTM. I remember how excited I was to start my internship with the company and looked forward to all the opportunities I would experience. I remember sitting in the area right outside Ari’s current office, and Ari walking passed the first time and how intense I thought everyone was. As the months passed I learned quickly how hard working and dedicated everyone on the team was to see this family grow. A year and a half later, StyleCaster has become a machine in which it’s culture and every one’s hard work from back then has sparked a fire. I look back and go, “Wow, I remember my first State of Style Summit and those crazy parties we hosted since then…This is the stuff that a solid foundation is made of.” To literally watch a company triple in size in only a matter of months is a once in a lifetime opportunity. I am very grateful to have been a part of that. It’s something I will never forget and will take with me as I grow as a person.”