As a millennial, it’s easy to feel underwhelmed by the lack of authenticity and grit that exists among pop-culture, and society in general. I grew up before the advent of social media—before comment threads and virtual walls and double-taps that fire more dopamine than a sugar rush—in the days where it took approximately 46 minutes to dial up the modem and required genuine effort to communicate, you know, using actual words. And I may spend a solid part of my day on the ‘gram (it’s literally part of my job), I’m thankful I know a time before all that.

And when I was about six years old—before every moment of our lives were recorded and then put on display—I was first introduced to the magic of Stevie Nicks. Despite the fact that it was an otherwise ordinary day, I have a vivid memory of walking through the local mall with my mom when Fleetwood Mac’s “Sara” came on over the speakers. I must have liked it, because I remember my mom telling me in that moment that I was almost named Sara.

Later, in the early aughts when I was in middle school and Discmans were a thing, Fleetwood Mac’s Rumours was one of my first CDs (in the mix with Ricky Martin and Christina Aguilera, of course), and I would listen to it almost every night before I went to bed.

More than 20 years after my initial discovery, “Sara” is still one of my favorite songs, Rumours my favorite album, and Stevie Nicks—one of the most authentic icons of our time—has been a huge part of my upbringing and how I view myself and the world. But more than just her musical talent, it’s her resilient spirit that has influenced me deeply. Stevie is, in my humble opinion, a lesson in how to be a gracious, respected, strong-ass woman—and how lucky I feel to be, in a sense, her pupil. Likely one of her youngest, but still. 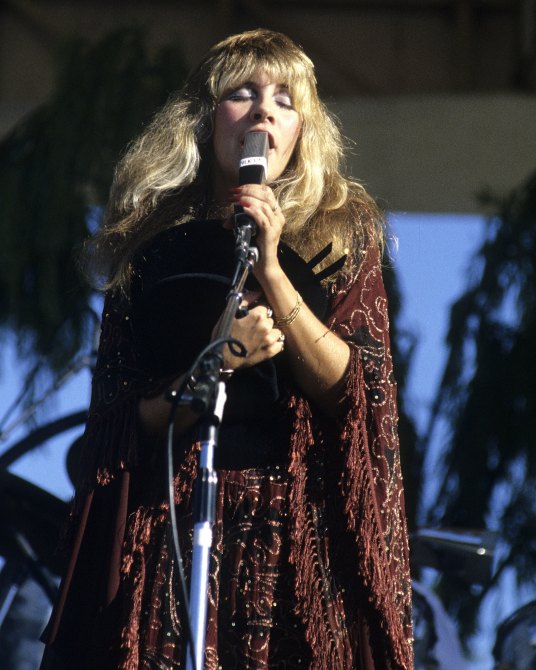 Several decades ago, Stevie had become so terribly addicted to cocaine that it burned a hole in her septum. Doctors warned her of a potential brain hemorrhage had she continued using, so she checked herself into treatment. “I knew I was going to die and I didn’t want to die…I did my 28 days and I came out and I was brilliant,” she said at the time. “I was as strong as an ox and I felt great. I could feel myself starting to glow again and I was totally excited about my life. When I walked through those doors at Betty Ford and they searched me and took away all my stuff, it was like, ‘OK I’m never doing THAT again—because I’m never coming back to a place like this.’”

But following her stay at Betty Ford, a psychiatrist prescribed her the tranquilizer Klonopin to treat her anxiety and curb her cocaine dependency, and Stevie spent the next eight years addicted to the prescription drug, which nearly killed her—again. “I nearly died,” she confessed to The Telegraph. “I molted. My hair turned grey. My skin started to completely peel off. I was in terrible pain. That was the worst period of my life. It was eight completely wasted years of my life,” After admitting herself to the hospital for a 47-day detox, she’s been clean ever since.

Of course, I don’t really know Stevie Nicks, and it feels strange to have such a deep admiration for someone I’ve only met once, very briefly (after the show I captured on my Instagram, below). But she was, for a while, the only living proof I had that one could go through something like that and emerge on the other side not just alive, but stronger. Although I’ve never struggled with addiction per se, I have a long history with eating disorders, and through treatment over the course of the past several years I’ve watched several of my peers die, or stay trapped in the cycle of treatment and relapse. It can get incredibly discouraging. Cheesy as it might sound, time and time again, I’ve found courage and faith in Stevie’s history and reminded myself that if she could conquer her own seemingly insurmountable afflictions and go on to have a happy, successful, meaningful life, I could, too. And long story short, I have, and I am. I credit so much of my own recovery to Stevie, which again, feels both weird but completely natural all at once.

Looking at Stevie Nicks now, in all her sparkly-haired, fairy godmother-esque, mysterious, chiffon-y glory, you’d never know how close she once came to the edge (not the Edge of Seventeen—a different edge). Her tiny 5-foot-1 frame (plus a couple of inches with those signature platform boots, obv) is rapt with radiant energy and fully present on stage, and even at the age of 68 she shows no signs of slowing down. And thank God for that–we need her! Nobody chooses to develop an addiction, or in my case, an eating disorder, but it does take tremendous strength and a conscious choice to overcome, a choice she’s clearly and very admirably made more than just once. She’s had to fight for the life she’s now living, and in doing so has empowered me to do the same.

I suppose I’ll never really know, precisely, what attracted me as a child to Stevie Nicks, who began her craft long before I was even in the womb, but I sure am glad it did. Because in this ever-evolving digital age where most things we consume are carefully-curated or somehow altered (see also: fake news!!!), I feel incredibly grateful to have grown up transfixed by a woman whose raw, timeless talent and sterling qualities are something I would be proud to emulate at every age, from the inside-out–rather than continuing to chase the widespread emptiness of our generation.