Miley Cyrus is sticking up for her former Disney Channel costar, Selena Gomez. After the “Good for You” singer was called “so ugly” by Dolce & Gabbana’s cofounder, Stefano Gabbana, Cyrus heard wind of the comment and defended her on Instagram.

In a comment of a fan Instagram of the former Disney actresses hugging, Cyrus called Gabbana a “total dick head.” The “Malibu singer” also complimented Gomez’s looks, calling her “fine as fuck.”

“Well what that dick head said (if it’s true) is fucking false and total bull shit,” Cyrus wrote. “She fine as fuck.”

We’ll never understand internet trolls. Usually, we chalk it up to a rando being jealous of a celebrity or someone who just likes the sound of their own voice (or the look of their own words?) That being said, the most unlikely—well sorta—of internet trolls exposed himself yesterday when he called singer Selena Gomez “so ugly” on Instagram.

The culprit? A designer and cofounder for Dolce & Gabbana, Stefano Gabbana. The 55-year-old took it upon himself to comment on The Catwalk Italia’s photo of Gomez wearing five different red dresses. While they captioned it, “#selenagomez rocks red dresses ❤,” Gabbana chimed in with the Italian phrase, “è proprio brutta!!!,” which translates to, “She’s so ugly!!!”

A post shared by The Catwalk Italia - TCI (@thecatwalkitalia) 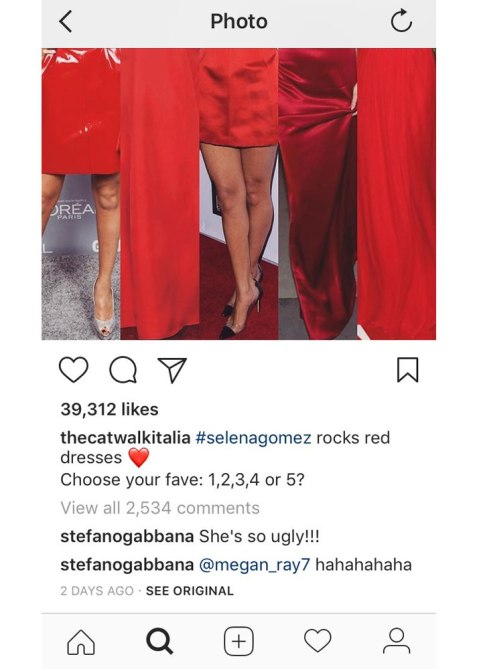 It’s unclear as to why Gabbana thought sharing his negative opinion would be a good idea, but as evidenced by his past, he doesn’t care about spreading hateful commentary. Since 2012, Gabbana has made racist earrings, fat-shaming shoes and remarks, and homophobic comments. So, are we really surprised he tackled the most-followed person on Instagram? Well, yes; mainly for the fact there was no point in doing it and he laughed it off like he was in the right.

Even though Gabbana is known for his hateful attitude, people didn’t let the comment slide. Tommy Dorfman, an actor from Gomez’s Netflix show “13 Reasons Why,” quickly and fiercely snapped back. “you’re tired and over. your homophobic, misogynistic, body-shaming existence will not thrive in 2018. it is no longer tolerable or chic. please take many seats,” Dorfman wrote. Many, many other’s came for the designer, too.

“Shame on you for online bullying. Doesn’t matter if 1 million people see it or 1 person, it’s bullying. It’s wrong.”

“Stop trying to make your brand relevant. Both you and your brand are ugly and passé.”

“How gross and pathetic of you to come for a sweet and beautiful woman like her. You’re a disgrace to your company and to the fashion world in general.”

MORE: Blac Chyna Shuts Down Body-Shamers Who Accused Her of Looking Pregnant

If there’s one thing that is tired, it’s unnecessary hate. Let’s start letting people live (looking at you, Gabbana).