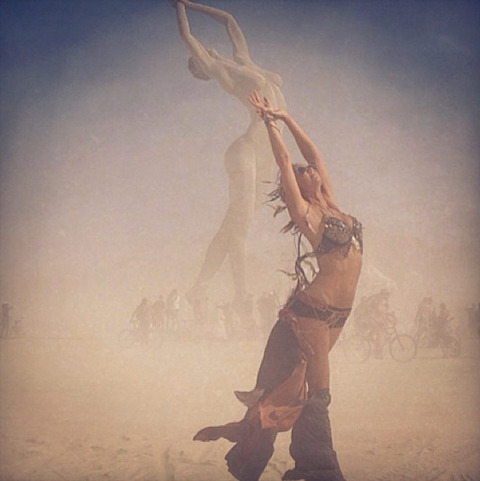 When you think of Stacy Keibler, you probably don’t think of her and Burning Man going hand in hand. After all, the 33-year-old ex-wrestler and ex-girlfriend of George Clooney would seem to be more comfortable on the red carpet than in the middle of the desert, but apparently we were mistaken.

It seems that after her split from Clooney, Keibler has been embracing her outdoorsy, hippie side, which is why she spent this past weekend at Burning Man—and rocked a pretty insane get-up. Her ensemble consisted of a bra, skimpy underwear, and a fringed cape—because why wouldn’t it?

Keibler took to Instagram to post the above photograph, and is clearly having the time of her life, captioning it with, “#BurningMan #Lifechanging.”

Burning Man describes itself as an “annual art event and temporary community based on radical self expression and self-reliance in the Black Rock Desert of Nevada.” So basically, it’s an excuse to wear an absurd costume and dance around while you may or may not be under the influence of a chemical substance.

We’re supportive of Keibler attempting to fit in with the crowd, and hey, her body is pretty off the charts. We wonder if Clooney is sitting in Lake Como staring at this photo longingly.