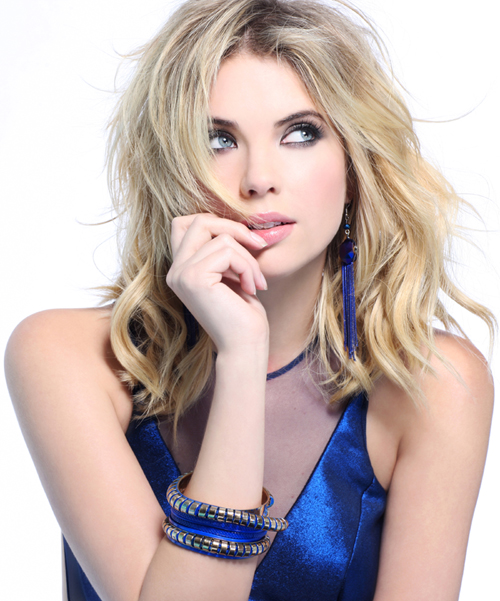 Ashley Benson has already nabbed a huge teen fan base (lovingly dubbed “Benzoholics”) thanks to her role as high school queen bee Hanna Marin on ABC Family’s smash “Pretty Little Liars,” but her career is about to hit new heights with “Spring Breakers”—one of the year’s buzziest films (out March 15 in L.A. and New York, out March 22 nationwide).

In case you’re not familiar (yet!), the dark comedy is directed by Harmony Korine—who’s responsible for left-of-center cult classics like “Kids” and “Gummo”—and stars Benson, Selena Gomez, Vanessa Hudgens, and Rachel Korine as four spring break-seeking college girls who find themselves engulfed in a world of drugs and crime alongside a cornrowed James Franco.

Benson is also upping her involvement in the fashion industry, appearing in a campaign for Faviana, which specializes in special-occasion items, such as prom dresses (perfect for her fans!)

We caught up with the 23-year-old at the Faviana showroom in New York, where we chatted about her personal style, her all-time favorite “Pretty Little Liars” looks, and the fact she’s never been to prom or spring break (ironic, considering she’s constantly cast as typical American teenagers).

StyleCaster: How is it working with Faviana?

Ashley Benson: This is super-cool for me because I never got to go to prom. I remember when I was younger, my sister would be going and I would help her pick out her dress, and now I get to do that for my fans. There’s the main Faviana line, as well as Faviana Glamour, which is more sophisticated—for those who like to dress a little bit more mature. The cool thing about these dresses is that you feel like you’re on the red carpet. They’re all designer-inspired, and you feel amazing in them. I was able to pick out 14 dresses for the campaign, and those are the top sellers! I feel really cool.

How would you describe your personal style?

My personal style is more casual. I love wearing boots, Converse, leather jackets, skinny jeans, and baggy T-shirts. I feel like I always have to be dressed up all the time, so when I have days off, I just love to be comfortable. I gear more towards black, I kind of have more of a edgy-feel. It’s tomboy-ish, I guess you could say.

You mentioned you didn’t get to go to prom. What about spring break—any crazy stories?

No, [“Spring Breakers”] was actually all of our first times on spring break! None of us girls had gone before. Vanessa, Selena, and I were working and home-schooled, and Rachel’s parents were too strict to let her go. It was definitely an experience. I don’t think I’d want to go on it again. I feel like we did everything that we needed to do while filming. It was crazy. Obviously in the movie, it’s a little bit more extreme. The funny thing is that a lot of the people in the background that surrounded us were just real people on spring break. Harmony wanted us to just be interactive with girls and guys that are actually on vacation, so that was interesting. Some of the things I witnessed people doing were insane, we were just like, “Whoa!” I’d say we definitely experienced the ultimate spring break.

So your ideal spring break would be a bit different?

Yes! I’d want to go to Fiji. It would ideally be me laying on a beach, reading a book with one or two girlfriends. We’d just be doing nothing, getting massages, and relaxing because my life is so hectic all the time. Mine would be more of a getaway than a traditional “spring break.”

The movie has plenty of edgy themes—drugs and sex—that your fans aren’t used to seeing you involved with. Are you excited for them to see a more adult side?

Yeah. The reason that I chose this movie is because Harmony is so amazing and anything he does, it has this cult following almost, and he has such a unique eye. I had been typecast as the all-American, popular blonde cheerleader, or ditzy girl based on my look, so this movie was super-important to me just because my character was so different. She’s edgy, she’s psycho, and I get to do things that I’ve never been able to do before. I hope my fans enjoy it, and I think they will. I think they’re excited to see a different side of me, and I think they really will enjoy this movie because it’s such a fun ride. It’s scary, it’s funny, it’s just … I don’t even know how to explain it. It’s a really unique, and different. Me and the girls are really proud of it, so I’m excited for them to see me in it.

You’re the most stylish character on “Pretty Little Liars.” Do you have any favorite looks from the show?

I have a lot. I’ve actually gotten to put a lot of my own style into Hanna. This season especially, she’s gotten a little bit more edgy, which I love. I love when she wears longer dresses with a leather jacket, or a blazer. She wore a lot of Versace-looking dresses—they were all weird patterns—and she mixed and matched things like that. My favorite style moment of the show has to be this hot-pink long dress, which I wore with a black and white blazer, a belt going across, and these insane shoes. It was amazing.

What’s the best career advice—and best style advice—you’ve ever been given?

Harmony actually just gave me and the girls really good advice the other day when we were with him. He said, “Never listen to anyone but yourself. Don’t look on the Internet. If people send you bad things, just block everything out because it’s going to distract you from your main goal.” He said to always focus on what your instinct is telling you to do. Everything that gets in the way is just going to distract you more and more. Everybody thinks that Harmony is just this crazy weird guy and going into it, I thought the same thing, now I think he’s amazing and so inspirational. The reason he’s made great films and been so successful is because he doesn’t care what people think about him. He does what he wants for himself.

Being so young and having all of this pressure on you all the time, and everybody looking up to you as a role model, it’s amazing. But at the same time, you can’t let it get too far because then you start making decisions that aren’t for yourself, but for other people. You feel like you’ve become another person. So just be yourself, stay focused, and work hard [to] get what you want is the best advice I’ve received.

As far as style, I say do whatever you want! Always wear what you feel comfortable in, don’t try and copy whoever you see on TV. Be original, be fun, be comfortable.