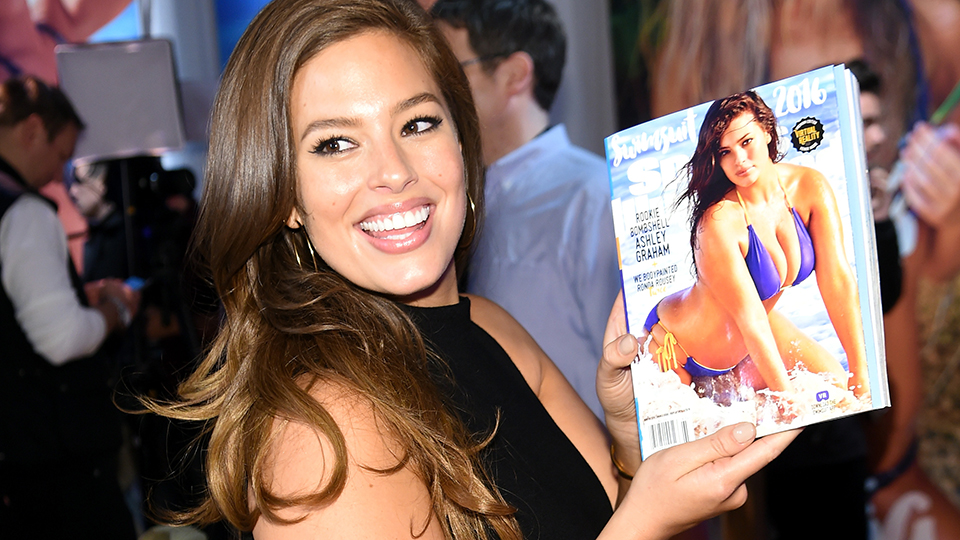 The Sports Illustrated Swimsuit Issue has been America’s veritable bikini bible for more than half a century, featuring the crème de la crème of fashion models on its cover—Christie Brinkley, Elle Macpherson, Heidi Klum—and turning sports stars into sex symbols. In the past few decades, the title, whose casting has historically skewed thin and blonde, has made some strides toward diversity—Tyra Banks became the first black model to make the cover in 1996, and athletes such as Serena Williams have increasingly taken pride-of-place within the pages—but only in the past few years has it become an unlikely industry leader when it comes to representing women of different races, ages, and sizes.

In 2015, size-12 model Robyn Lawley was cast among the issue’s annual class of rookies, making history as the first so-called “plus-size model” to do so. Following widespread media praise, the magazine this year went a step further and put Ashley Graham, a size 16 and one of the industry’s most vocal advocates for body positivity, on the cover along with model Hailey Clauson and UFC star Ronda Rousey.

Advertisers, too, have leveraged the massive platform—the issue boasts 60 million readers per year, according to publisher Time Inc.—to showcase models not usually seen in mainstream media. Graham’s first appearance in the magazine, for instance, was in a campaign for retailer Swimsuits for All in 2015. This year, the brand cast her alongside British-Ghanaian model Philomena Kwao and 56-year-old model Nicola Griffin; all three wore gold string bikinis above the tagline #SwimSexy.

Lane Bryant, the pioneering plus-size retailer, also took out major ad space in the 2016 gatefold (that’s the four-page spread behind the cover) to launch its “This Body” campaign starring model Precious Lee, one of the first plus-size African-American models to ever appear in the issue.

We caught up with Lee, Graham, and the rest of the models at a Sports Illustrated press day recently to talk about the strides they’ve made, the reactions they’ve gotten from friends and fans, and what’s in store for the future of diversity in modeling. Read on to get to know the faces revolutionizing the Swimsuit Issue:

On the response she gets from fans “I get so much love, and I hear so much stuff about plus-model bashing and blah blah blah—I get so much love, and I’m so happy for it, because it really shows that not everybody is closed-minded, not everybody has the same thoughts. I love getting messages from little girls that say, ‘You made me feel better about myself by seeing you on a billboard.’ Like, are you kidding me? That’s incredible! So that, to me, is why I wake up at 7 a.m. and go jump around in front of a camera. And wear heels all the time. Every time you see me in a picture, if I’m not wearing heels … well, I’m wearing flats. But I’m wearing heels constantly. I can’t even feel my feet right now.”

On the importance of having curvy role models: “My mother is a glamazon. I feel like I didn’t see my mom without makeup on until I was like 20 years old. She was just a glamorous, loving, nurturing, curvy woman, and I never thought curves were bad. I never did. I admired Sophia Loren, Josephine Baker, Dorothy Dandridge … curves! I’m just really fortunate and I want to keep saying that, because I get these questions all the time. Everybody doesn’t have that: to be in a nurturing environment, to have someone who continuously talks about body positivity, and I did have that, and that’s the reason why I go so hard in spreading that message, because it’s something that’s really embedded in me.”

On the sense of community among plus-size models: “We all love each other. Did you see all the Lane Bryant girls? All the Swimsuits for All girls? Look, at the end of the day, we never were invited to these things. This was never something that we could go to. We always saw it online, but now we’re a part of it! We’re the new normal, and it’s exciting to have that gap be bridged and all of a sudden just be a part of it.”

On her debut swimwear collection: “You can expect to see lots of James Bond moments, a lot of black, a lot of itty-bitty bikinis—because as a curvy woman, I think the smaller the bikini, the better.”

On career goals: “I’m ready to walk in the Givenchy show or the Dolce & Gabbana show, and I am ready to have the Ashley Graham Show to change some more women’s lives.”

2015 Sports Illustrated Swimsuit Issue Rookie of the Year, designer of Robyn Lawley Swimwear, and mother of a one-year-old daughter (with whom she was pregnant during her first SI shoot):

On the magazine’s efforts toward diversity: “It just gets better every year, and I think as long as we have women empowering women—because MJ [Day, the editor of Sports Illustrated] is the reason a lot of this is happening, she had kids herself, she’s a hardworking woman, she knows what the world is asking for, and they’re asking for size diversity and to see their size represented in something. I find women of all sizes sexy, and I love it and I think so do men. Men don’t like one type, they like lots of different types, so everyone gets a seat. It’s really awesome.”

On what’s changed since having a child: “Oh, everything. Everything is changing, nothing is the same ever again. You’re like, Ahh, dammit [laughs]. When I was pregnant, I remember doing interviews last year, and I was so pregnant I just didn’t give a shit. I was like, “I’m so unattractive right now.” And just sitting there being like, “Hey guys.” It was very interesting. Your time is so important to you, so time becomes really important, and you learn a lot of patience. You become less selfish when you have a baby to worry about.”

On being an advocate: “I’ve always wanted to speak out, even before I started modeling. I have a master’s degree in international health management, so I’ve always been very vocal about things that inspire me, like maternal health and women’s empowerment. I feel like a lot of women’s empowerment issues can come from just a lack of body positivity—they’re not mutually exclusive. So to be part of a campaign that celebrates body positivity and allows you to empower yourself by owning your beauty and realizing that you don’t have to look a certain way to be confident, it works all around.”

On representation: “I’ve had a wonderful response for women of my age—they feel inspired, and I hope that I’ve inspired them that they too can wear beautiful swimwear and look good at any age and at any size. Plus-size models, older models have not been represented before, so this is groundbreaking. I can now represent my age group, which is wonderful.”