Remember when T-Swfit and Joe Jonas dated back in 2008? We do. And we’re guessing Sophie Turner does as well. She came face-to-face with her husband’s ex-girlfriend, and it could not have gone better. Sophie Turner and Taylor Swift meeting while Joe Jonas watched is probably the most iconic thing that’s happened all week. The two ladies made an appearance together on the BBC’s The Graham Norton Show. Swift dated Jonas back in the day, until he famously ended the relationship over the phone. Yikes. Turner and Jonas recently tied the knot in a Las Vegas wedding ceremony earlier this month. But it seems like the two artists weren’t bothered by the relationship history at all. In fact, they bonded over their bangs.

During the appearance on the British chat show, Turner and Swift sat on the same couch together to discuss life and upcoming projects. Graham Norton prides himself on bringing random celebrities together for a discussion but we’re wondering if he planned this one a little too perfectly. Maybe he was hoping for that Jo-Bro to come up. (Joe Jonas was not a topic of conversation between the two women. FYI). Swift discussed her interview with Rolling Stone. She explained how incredible it was for her—goals—and also confessed that she got into not one, but two fender benders while they were interviewing her:

Turner did open up about being “Mrs. Jonas” with Norton but T-Swizzle was not involved in that part of the convo.

Norton asked Turner if she was still having a party, which seemed to take the Game of Thrones actress a bit by surprise. He then realized he’d spilled the beans, per say, and joked that he knew all the info. “It’s in France. The fifteenth of July. Just outside Montpellier,” he said directly to the camera. Then he added, “No, I’ve no idea,” to which Turner replied, “That was a pretty good guess.” It was originally thought that Turner and Jonas would be tying the knot in France sometime this summer so perhaps it’s still happening and is in July…we’re keeping an eye out for this epic party!

But back to the matter at hand, the “Look What You Made Me Do” singer and Dark Phoenix actress looked remarkably similar when they showed up to the talk show. Both women are rocking bleached hair with shaggy bangs. And they seemed to bond over that little gem. Look at them hug! So sweet. 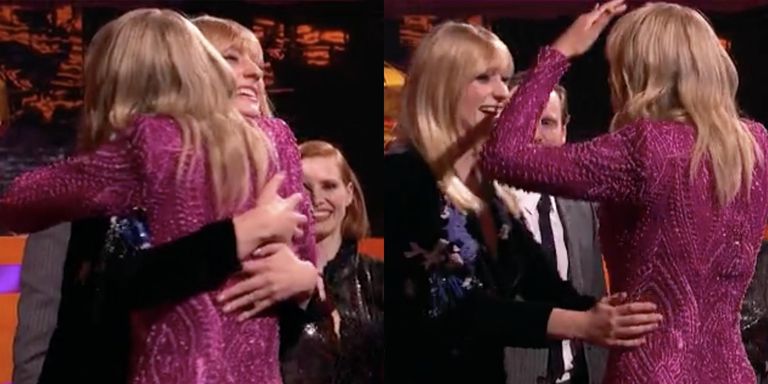 We knew there was no ~bad blood~ between these women. In fact, Swift is an avid Game of Thrones fan and a few of her songs were actually inspired by the series. She explained that Reputation was largely influenced by GOT. And Turner’s character, Sansa, was a big part of the song “I Did Something Bad.” Swift explained that she wrote that hit after Arya and Sansa conspired to kill Littlefinger together. Have a listen:

That’s pretty cool if you ask us.