With Lorde‘s stint as an onion rings Insta-reviewer and Kendall Jenner‘s still-mysterious account dedicated to pizza, secret food Instagrams should be commonplace by now. Yet we can never hold our excitement when we learn that one of our beloved stars moonlights as a extreme Instagram foodie. The next celebrity to take up a career as an amateur Instagram food reviewer? Sophie Turner.

On Wednesday, the “Game of Thrones” actress revealed that she has a secret Instagram dedicated to reviewing sausages. On her Instagram story, Turner posted a screenshot of her cleverly named sausage-reviewing Instagram, @sophiessausagereviews, asking her fans to follow it. “Shoot us a follow yeah?” Turner captioned the picture. 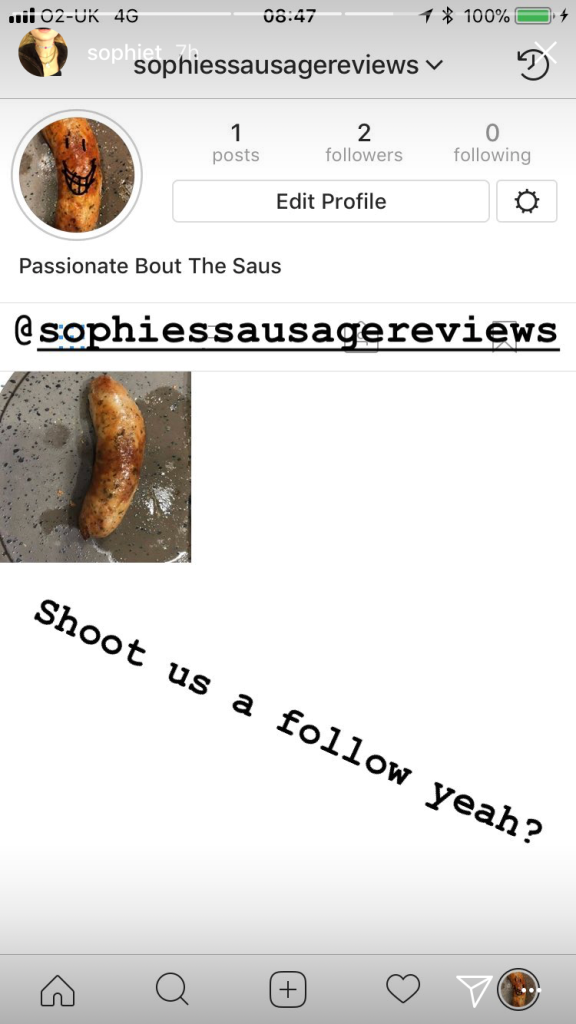 MORE: 12 Celebrity Kids Who Are Following in Their Famous Parents’ Footsteps

Turner’s Instagram story linked followers to an Instagram, where the actress reviewed sausages of all shapes, sizes, and tastes. As of April 5, 2018, the Instagram, which features a smiley-faced sausage as its icon, has three eloquently written sausage reviews. Each review includes where Turner ate the sausage, her review on the skin, size, taste, and texture, and a number score letting her followers know if the sausage is worth returning to or not.

Judging from her carefully written reviews, Turner is clearly knowledgable about sausages, as proven by her Instagram bio: “Passion Bout the Saus.” We’ll keep you posted on whether any sausage receives Turner’s coveted 10/10. Until then, we’ll be on the lookout to see if any other celebrities start secret food-reviewing social media accounts.