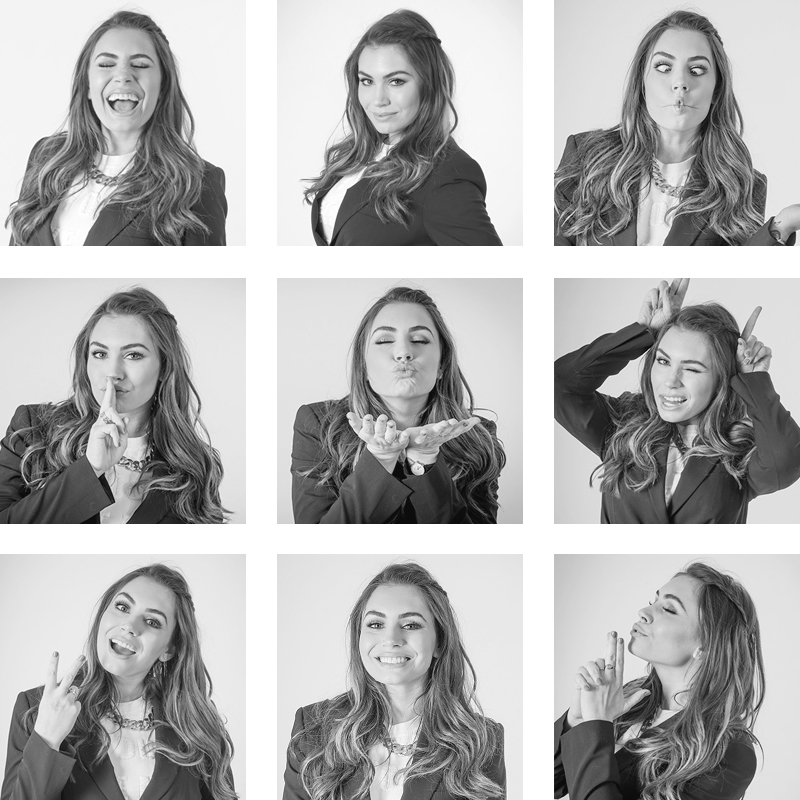 Sophie Tweed-Simmons may be the daughter of rock royalty (that’d be Kiss frontman Gene Simmons) and a former Playboy “Playmate of the Year” (Shannon Tweed), but the L.A. native and budding fashion entrepreneur has her sights set on being much more than just another Beverly Hills celebrity kid.

For starters, Simmons, 22, launched a fast-fashion collection in collaboration with The Style Club last year—Sophie x TheStyleClub—offering affordable clothes for women of all sizes. It was such a hit, that the first capsule collection of dresses sold-out within 72 hours. Next up? A 16-piece line of customizable jewelry in collaboration with Diamondere which launched this year. Beyond that, she’s at the helm of a blog Sophie Tweed Simmons #NoFilter where she posts outfit photos of herself, and she’s a bona fide social media sensation with over 786,000 Twitter followers and over 139,000 on Instagram.

Simmons stopped by our office where she got candid about the success of her clothing line, shopping her famous model mom’s closet, and why she hates having her photos re-touched. After spending some time with Simmons, and hearing her all-too relatable stories, we can attest that Simmons is basically the BFF we all wish we had. Get to know her below—we pretty sure you’ll agree.

StyleCaster: Your clothing line in collaboration with The Style Club has been a huge success! Why do you think women have responded to it?

Sophie Simmons: I think they like that we’re trying to cover all women with the collection. We use elastic waistbands, we don’t use any real fur or leather, it’s affordable. We’re trying to appeal to as many young women as possible because there are a lot of in-betweeners—as the fashion industry calls them—out there, women who aren’t plus-size, but don’t fit into straight sizes either. That’s where I’ve been my whole life, and what I’ve struggled with.

In that vein, you’ve been really outspoken about not retouching photos of yourself on social media.

I try not to use filters, I don’t alter myself, crop myself, or use those apps [that make you appear thinner]. I try to keep my Instagram really real. It ties into my blog which is called #NoFilter, where all my photos don’t have filters on them.

If I do use a filter, I’ll say I used a filter, and that I obviously didn’t wake up like this. People [then say] thank you for admitting that. What a lot of people really don’t understand about social media, is that now [the big Instagram stars] are making each post like an ad campaign, and their photos can seem really unattainable. It’s made a lot of young girls feel really down.

How out of control do you personally think retouching on Instagram has gotten?

We all have our reasons, we all have things that we want to change, but there is a point of taking it too far.

How has your style changed as you’ve gotten older?

I used to be very much of a tomboy and surf every day, and I wore puka shells, and had ocean hair. I think I have a school picture where I’m wearing a shirt that says “My heart belongs to what’s his name,” so I was like a little sassy tomboy. When I was young, and all my friends were boys, [but] I had breasts, I didn’t know how to deal with it, so I was wearing board shorts and T-shirts. I just didn’t know how to dress my body. As I’ve gotten older, I’ve really loved getting into more of a feminine silhouette, and accentuating my waist.

Has your dad been an influence on your style at all?

Not at all. My dad literally has no style. He wore leather lace-up crotch pants until we took them away from him. He’d still, at 65, be wearing [those] leather lace-up crotch pants, which is not appropriate for his age … He doesn’t wear what people in fashion would think is “good” fashion. He wears cowboy boots, the same ones every day, jeans, the same ones every day, a dirty T-shirt, and a blazer and that’s his every day.

It could be for a red carpet, it could be just lounging at home, it’s the same outfit every day. I do think there’s something to be said for a lot of geniuses and innovators wearing [what’s] almost a uniform. People like Mark Zuckerberg wear a uniform because they’re thinking about so many other things. I purged my closet the other day because I thought it shouldn’t take me an hour to get dressed every day, it just shouldn’t.

And what about your mom?

My mom’s closet is insane. She’s like me, we don’t like to throw anything away. .. She still has stuff from when she modeled in the ’70s and ’80s, like one of the first Hervé Léger bandage dresses. She’s always telling me this is stuff that we don’t throw away because it’s classic. A lot of her clothes are very simple button downs, pencil skirts, and that’s been the same decade after decade.

My mom and I are almost the same size in everything … so I can pull from her closet whatever I want, which is really great. She in turn takes things from my closet. She pushes me to be more classic, I push her to be more modern.

What’s getting ready for the red carpet like for you?

I’ve never really had a stylist or anything like that, and I’m really terrible at red-carpeting—if that’s a verb? I don’t really have help in that department, so I’ll Facetime my mom, and ask, “Do you like what I’m wearing?” I feel like a lot of times, when you have a stylist, your personal style gets lost in what the stylist wants you wear, and a lot of stylists, I think, only know how to dress really tiny women, and they don’t know how to pull for my body. I had a stylist pull dresses for me once, and they all said sample on the tag. I was like,”There’s no way I’m getting in any of these.”

What’s your advice to the woman out there who isn’t model thin and feels bad about it.

No one is ever going to walk up to you and say, what size pants are you wearing? We all need to stop worrying about that, so buy clothes that fit. I used to buy jeans that were two sizes too small because I wanted so badly to be a 27, because all of my friends were a 27, but that’s ridiculously small, and they didn’t button. I ended up just laying on the floor before school trying to get those stupid pants buttoned and being uncomfortable. I’d now rather buy two sizes up, and have pants that fit me, and are flattering, than be embarrassed and uncomfortable all day. My advice is let’s all just stop dressing for other people.

Tell us about the inspiration for your jewelry collection with Diamondere.

I started on Pinterest making a board with a bunch of trees, Beyoncé—just really random stuff that inspires me. And it’s men that run this company, and they said, “We don’t really know what to do with this,” but the more we talked about it, the more they understood my concept. All of the pieces are named after aspects of nature, and the theme is natural beauty.