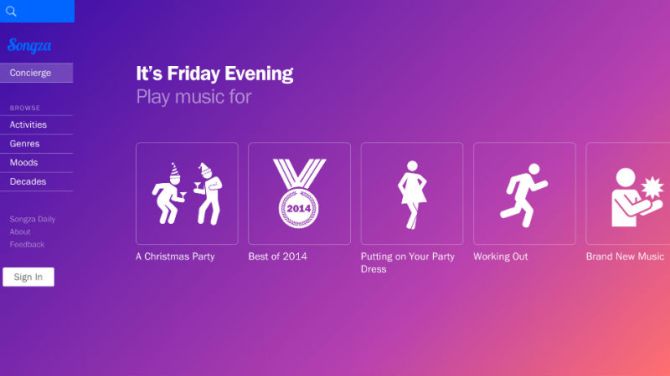 If your office is anything like ours, music can be an instant game-changer when it comes to productivity, energy, and overall mood. Heck, music is a game-changer in any given scenario, and a great playlist is worth its weight in gold.

For a generation of music lovers that as on-the-go as they are connected, digital-first platforms like Pandora and Spotify allow users to keep themselves both entertained and constantly in the loop on new music.

When Songza burst onto the scene in 2012, the music-streaming service had a fresh approach: Anchoring the offering around brilliant playlists as part of a feature called Concierge. The Concierge service is time-sensitive, season-specific, and is often eerily on point. Clearly, the brains at Songza were onto something because the service was acquired by Google just this past summer.

But how do they do it? A playlist like “Being Pretentious” just has to have been dreamed up by a real-life human, not an algorithm. Right? And how do they know that on a Friday afternoon, a playlist centered around burning through your inbox should kick off with the Backstreet Boys’ “Everybody (Backstreet’s Back)”? (Ed note: I did, indeed, burn through my inbox—thanks, Songza!)

So are there humans in there? How does Songza work its playlist magic? We spoke with Elias Roman, the co-founder of Songza, to get a peek under the hood at just what makes the service’s Concierge service so rich.

How do you guys decide what different “moods” are assigned to different time periods? Let’s say it’s Friday evening, and you suggest “Singing in the Rain”—how do you know it’s raining in New York right now? It’s like you’re psychic, a little.

Just to set the stage, over the summer Songza was acquired by Google. Since then, we’ve integrated key parts of the Songza experience into the Google Play Music product. What I describe here does, for the most part, apply to both Songza and Google Play Music. So the process begins with our editorial team mapping out all of life’s moments that can be improved with a great soundtrack.

There are hundreds of ‘moments’ mapped out, and new ones are created all the time. We use a combination of a little intuition and a lot of data to help us anticipate what moment a given user will be in.

Who’s responsible for the amazing topics of your playlists that go a level deeper? For example: “Being Pretentious” or “Drinking Jungle Juice.” It can’t be robots, those are just too good.

Every playlist topic (and every song on a playlist) was decided on by a human music expert. Our playlists are 100% robot-free, which allows them to ‘get’ things that are very nuanced, culture-driven, etc.

In layman’s terms, how are these playlists created? Does it start with a series of songs, and then move on to ‘recommendations’?

It starts—and ends—with 100% expert, human curation. What allows our user experience to scale is that each of these handcrafted playlists are then algorithmically matched to the right person, in the right moment. In that way, Songza and Google Play Music benefit from the best of human curation and algorithmic optimization, each serving a very different purpose.

What are a few of your all-time favorite playlists? What are some of the most quirky ones?

I have a one-year old at home, and the playlist Songs To Raise Your Kids To gives us pure and total joy. It totally reminds me of what my dad used to play for me. Hillbilly Bodybuilding features upbeat Country workout music. Blogged 50 is a playlist digest of what the great indie music blogs are talking about, so I can sound way cooler than if left to my own devices. Feelin’ Good in the ’90s—the title speaks for itself and I’m a sucker for ’90s nostalgia. I can confirm that the playlist Hamptons Beach Traffic causes you to arrive at the beach in a way better mood after hours of beach traffic.

What are some of the all-time most popular playlists on Songza?

Songza and Google Play Music have some incredibly up-to-the-minute playlists of brand new music in different genres. Some of the most popular are included in our Today’s Biggest Hits, Today’s Dance Club Hits, and Obsessively New playlists. 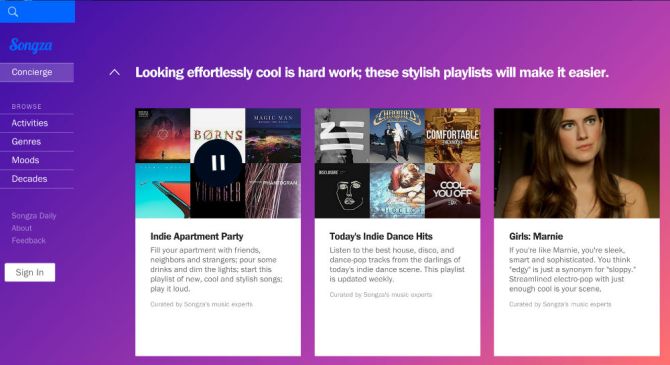 Do you guys ever get nominations for new playlist ideas?

All the time—from our network of music experts and from our users. One of my favorite examples was a user who reached out and said “My wife is having a baby and we need birthing music!” So we did some research and created Soothing Songs for Moms.

What are the most popular genres and moods on Songza?

Some of the most popular ‘moments’ that people use Songza for throughout the day are: Waking Up Happy, Working Out, Commuting, Having Fun At Work, Cooking, Having Friends Over and Sleeping.

Do we need to hype this thing any more for you? Head over to Songza.com to find your own favorite playlist.