In Feel the Beat, Sofia Carson’s character April, a dance teacher, asks one of her students how she can dance if she’s deaf. “I feel the vibrations,” the student, Zuzu, responds in sign language. The moment, though short, is the reason why the film is titled Feel the Beat.

“I don’t think many people know this, but the reason the movie is called Feel the Beat is because of Shaylee [Mansfield, who plays Zuzu,] and how her character feels the beat literally,” Carson tells StyleCaster.

Feel the Beat, which premiered on Netflix on June 19, follows April Dibrina, a burnt-out Broadway dancer who returns to her hometown in Wisconsin after a series of failed auditions. Begrudgingly, April takes a job as a dance teacher for a class of inexperienced students with the hope of catching the eye of a famous theater director at a major dance competition later that year. As one can expect, by the end of the movie, April’s icy exterior is thawed as she learns more from her dancers than they could ever learn from her.

According to Carson, Feel the Beat’s director, Elissa Down, chose to have a deaf character because of her brother, who’s autistic and speaks using sign language. “Her brother never got to see himself in a movie or a TV show before. He never felt identified or included,” Carson says. 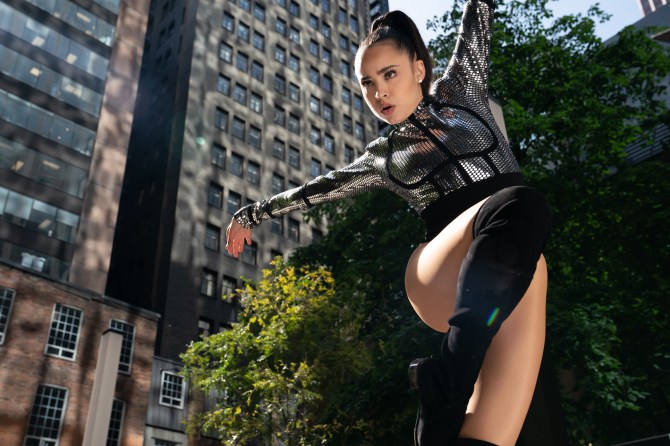 For the role, Carson and the cast learned American Sign Language, which was at the recommendation of Mansfield, a deaf YouTuber and actress, who wanted the film to be as authentic as possible.

“I felt so lucky to be included in a movie that is so inclusive and where Shaylee’s character shines so bright,” Carson says. “She also wanted to be sure that it was as real and genuine as possible to what her experience would be and how the girls and the teachers in class would have to learn sign language to communicate with her. It was beautiful to have this community that embraced her, loved her and celebrated her rather than isolated her. It was beautiful to see the response from kids seeing themselves in this character.”

Ahead, Carson talked to StyleCaster about how her career mirrored April’s, the dance number that made her cry and how her fan-favorite role in Disney Channel’s Descendants led to Feel the Beat.

“The woman who cast me in the first Descendants film is also the woman who cast me in this film. It’s really a full circle moment because she gave me my very first job. When she sent me this script, I just fell in love with April. When I went in and met with them, something clicked and felt right. My favorite part of the process was auditioning with the kids. After I was cast, I got to be a part of their audition process and surprise them on their last audition day when they were doing a dance. I came in as April, so I had to be very mean, strict and tough on them. A lot of the girls happened to be fans of Descendants as well. It was a really hands-on experience from the very beginning. They wanted me to be highly involved in April and her story. I felt so grateful that they trusted me like that.”

On how she related to April’s pressure to be perfect

“Her story was so close to my heart. I fell in love with dance when I was 3 years old and it was my window into falling in love with the arts and performing. I understand and feel so vividly what April feels. For April, dance is her whole life. She lives and breathes it. For me, that’s kind of how my life is too. I live and I breathe what I do. I understand the passion and the pressures that she feels. In a lot of ways, moments in this film felt like I was telling my own story.

April really struggled with obsessing over trying to be the best possible performer she can be. In that process, she forgot why she loved it to begin with. As a professional myself, I tend to be a perfectionist and I want to push myself to be the best that I can be. I loved that this story reminded all of artists that we have to lose ourselves in our art and remind ourselves of why we love what we do and not try to be something else.” 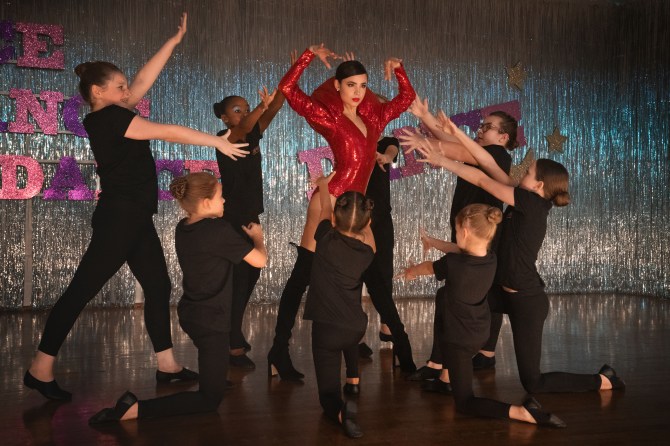 On how she trained for Feel the Beat

“I’ve been dancing since I was 3 years old. I’ve competed nationally growing up and in high school. I had two months of training before the film started to be in the physicality of what it meant to be a competitive dancer. It was a two-month process of preparation and rehearsals, and there was so much choreography in how April’s story is told through dance. I had to make sure that was captured. Of course, that incredible backflip, that was not my backflipping. But it was amazing to dance like that again and to feel the physicality and the emotional challenges of being a dancer.”

On how the contemporary dance scene made her cry

“It was incredibly emotional. That scene and the barn dance, I cried and held back tears through most of it. There was something about that moment that felt so liberating and so real. April’s story literally came to life for me. We actually learned that piece two days before we shot it. All of us, myself and our incredible cast of young girls, just started sobbing when they showed it to us, especially the moment when Zuzu gets to speak and says that we are family, and we repeat it through dance. It was beautiful. It was kind of the heart of our film. The flower also made it really powerful for me. That flower is a flower that we find in a field of daisies where April grew up in. It was truly like her homecoming on that stage.”

“That’s the one moment where I got a lot of texts from my friends and family being like, ‘We really hated you when you did that.’ Like April says, she’s been dreaming about this her whole life. As an actor, I had to understand her in that moment and understand her choice, the pressure and her love of what she does and how she’s torn. She knew it was wrong, but she did it anyway. As actors, performers and people in Hollywood, I’m sure everyone would say there’s a lot of sacrifice. Sacrificing moments with your family or moments with your friends for your career. So I understand. But then again, I don’t. Because if there’s one thing that I’ve learned through all of this, it’s that there’s nothing more important than family. Even in those moments where I have been on stage and I have had beautiful successes, when I haven’t shared them with the ones that I love, they don’t mean as much.” 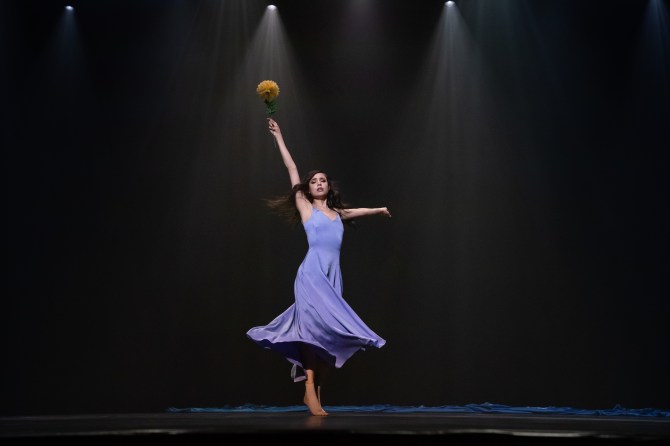 “There’s something about these young girls where they’re beyond their years. There was nothing but support and love between them. They were also so brave and courageous and they loved the stories they got to tell. For me, everyday is magical, but sometimes I find that, with adults, they don’t tend to feel that way. Being around other kids, everything becomes so much more magical. For a lot of them, it was their first time on a movie set.  I would say I learned from them more than they would ever imagine. But what I would always tell is, first and foremost, to stay close to their families and their parents as they grow up and they experience more successes and to not feel the pressures to have to do this on their own. And to stay in school for as long they can.”

On what she learned from April

“I learned from April exactly what her story is about. As someone who strives to be the very best at what I do and who tends to lose herself in her work or wanting to be better than what I am right now, that reminder of why I do what I do, that reminder of thinking of the little girl who walked into her first dance class at 3 years old and fell madly in love with dance because she felt like home. I can never lose that feeling because that’s the reason why I do what I do and why I’m so lucky to do what I do. My mom has always said this to me, but it just felt more real when I was telling April’s story. The second that I lose that, what’s the point?”