Let 2015 go down in history as the year that Snapchat reigned supreme — we saw the app used at every cultural forum from fashion to politics, with tons of celebs joining the platform this year.

And while you’ve probably followed most of the celebs who have been hawking their Snapchats (kylizzlemynizzle, anyone?), there are some celebs who are worthy of some extra accolades for making the best snap stories of the year — snap stories that go above and beyond the basic selfie or paid promotion. 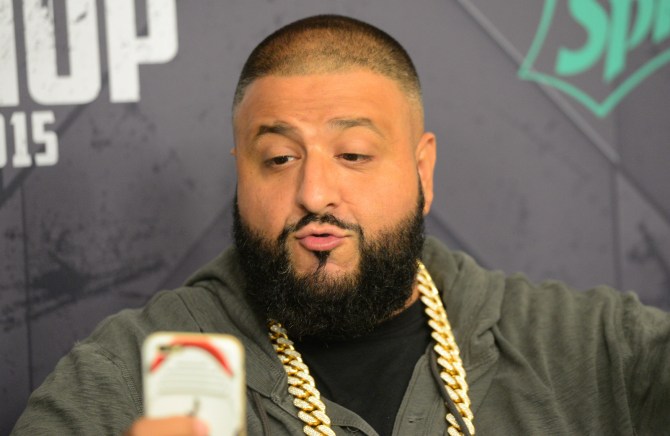 DJ Khaled, one of 2015’s best Snapchat accounts to follow.

Some, like DJ Khaled, have made it their mission to spread positivity, while others, like Jared Leto, have elevated the selfie to basically an art form; for this we are recognizing their unique contributions to the Snapchat community with the first-ever, Snapchat Superlatives.

Without further ado, here are 15 celebs who have made Snapchat a better platform to watch — make sure that you’re following them, ASAP.

We challenge anyone to find someone more inspirational than DJ Khaled on Snapchat. Not only does Khaled offer gems of advice to finding “the keys to more success,” but he also offers lots of encouragement (“Bless up!”) to his followers to keep hustling even if others “don’t want them to succeed.” Look forward to seeing lots of snaps of his garden, his gourmet meals, and Khaled on his jet skis and in the hot tub. Ciroc Apple will also be proffered as the ultimate key to more success.

Hannah Bronfman, heiress, DJ, and fitness blogger extraordinaire can now also add Snapchat superstar to her ever-growing CV. Look for lots of snaps featuring the multi-hyphenate on her way to Soul Cycle or running with her fiancee, DJ Brendan Fallis. It’ll be all the motivation you need to get moving this winter.

Most Likely to Give You FOMO: Diplo (diplo3000)

Suffice it to say that Diplo is one busy man. Whether he’s DJ’ing in Miami or St. Tropez, you can bet that Diplo is partying it up and documenting it all on Snapchat. You can get glimpses into the crazy dance parties, raves, and adventures abroad by following his snaps; keep an eye out for guest appearances from everyone from bestie Skrillex to Madonna.

You can keep up with Jared Leto’s ever-changing hair color and latest concerts with his Snapchat, but be warned – it’s mostly selfies with lots of Snap art. But honestly, when you look this good, selfies are kind of a prerogative.

If there is any fashion insider who will keep it real on Snapchat, it’s Shiona Turini. The stylist and street-style maven (who counts Solange Knowles as one of her besties), is a fastidious Snapchatter. Peep her account for behind-the-scenes looks at the fashion industry, from shoots abroad to glamorous parties. The candid commentary and ace emoji usage can’t be beat.

Most Likely To Never Give a Fuck: Rihanna (Rihanna)

Leave it to Bad Gal RiRi to show us what Snapchat looks like without posturing; despite the fact that the singer hasn’t released her much-anticipated album, ANTI, Rihanna has been snapping up a storm. From sing-a-longs with her besties to getting lit and lighting up, there’s nothing too risqué to be posted on the singer’s account. Plus, Rih knows what the people want to see — expect some seriously sexy selfies. #Blessed.

Most Likely To Give You A Serious Case of Wanderlust: Yvan Rodic (MrFH)

Yvan Rodic, or as he’s known to most of the world, FaceHunter, travels the world to photograph the world’s best street-style and culture; now you can experience his travels in real time with his Snapchat account, which he films with a wide-angle lens (fancy!)

Most Likely To Be Your Guilty Pleasure: Spencer Pratt (prattspencer) and Heidi Montag (prattheidi)

Admit it; you DEFINITELY miss watching Spencer and Heidi whine and make drama for everyone on the Hills. While the reality tv show might be over, you can still get your daily dose of Speidi by watching everyone’s favorite notorious blonde couple on their respective Snapchats. Look for insights into their everyday lives in Southern California, plus the same sappy declarations of love that you loved to hate on The Hills.

Most Potential To Have a Diva Moment: Mariah Carey (mariahcareylive)

Everyone’s favorite diva just joined Snapchat and while she hasn’t been posting that frequently yet, there is unbridled potential for the most epic diva moments to be had on this platform (and we all know that Mariah loves a “moment.”)

Consider Bella Hadid the new Kevin Bacon when it comes to degrees of celeb connectivity. Whether she’s chilling with the fam (sister Gigi or  mom/Real Housewife,Yolanda) or her LA squad (Kendall and Kylie Jenner, anyone?), there’s a good chance that you’ll be seeing a star of some kind. Compound that with her blossoming fashion career and her boyfriend, the Weeknd, and it’s a given that you’ll definitely want to follow Bella’s snaps to keep up with her and her crew.

Most Likely To Give You Nostalgia for the early 2000s: Paris Hilton (RealParisHilton)

Remember when Paris Hilton was THE celebutante and Kim Kardashian was just an assistant? Remember when the Simple Life was still on the air? You can relive the glory days of Paris Hilton by following her Snapchat, which is exactly what you think it would be. Expect lots of selfies of Paris, pans of her travels by yacht and private jet, and of course lots of snaps of her DJ sets around the world. As Paris would say, “that’s hot!”

Calvin Harris made his name as a DJ, but is now known by most of the world as Taylor Swift’s arm candy (with more longevity, might we add, than her other paramours). While there are plenty of selfies on Calvin’s Snapchat account, he won the hearts of Swifties around the world when he snapchatted babysitting (cat-sitting?) Swift’s cats while she partied. Relationship goals, much?

The best way to spot Justin Bieber’s bratty antics before the gossip rags do? By following his Snapchat. The Biebs snaps pretty frequently, and you can catch him taking shirtless snaps or ranting about fans (as one does) on his account.

Obviously, the best account that you should (already) be following is the StyleCaster Snapchat! From sneak peeks at upcoming content, interviews with celebs, and behind-the-scenes access with our team of editor to everything from fashion week to industry events, our Snapchat is the account you won’t want to miss.