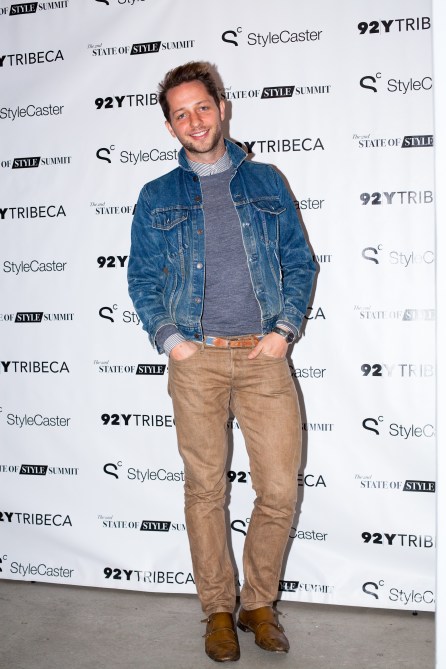 At yesterday’s State of Style Summit, we had the privilege of grabbing six minutes with fashion writer and editor (and Classy author) Derek Blasberg after he sparred with pal Nate Berkus on stage. Here, Blasberg weighs in on everything from Cathy Horyn versus everyone to what type of suit you need to buy this spring.

You have a large social media following. What do you feel gets the most reaction?

I wish I knew that! I wish that there was a formula that I could apply. Sometimes I’ll say something that I think is really, really funny—zero re-tweets, zero favorites. Then sometimes I’ll say something that I think is sort of asinine, but maybe strikes a chord, and it gets re-tweeted, like, a thousand times. I once tweeted something a friend said: “Sometimes I think I think too much.” And I thought, “That’s funny,” so I put it up there, and it got re-tweeted, like, hundreds of times.

What you said during the panel was very astute—that you’re a bit more broadcast-y when it comes to social media. People want to be in your world. So who do you follow? Whose worlds do you want to be in?

To be honest, I kind of like to see what my friends are up to. In the world of New York, work becomes a lifestyle, and I’ve got some friends in St. Louis or friends who live in Europe or the West Coast. And this way, you get to see their kids or what they’re wearing—what they’re up to. So I actually prefer that on Instagram. But what I love about Twitter is that I follow Women’s Wear Daily, and I follow CNN, so that I feel like I’m not missing anything. I’m on the road so much, so it’s not like you wake up every day and read the paper. When I’m out of town so much, it’s nice to follow all those things and be like, “Oh! Michelle Obama wore Michael Kors. Good to know!”

Speaking of being on the road, you’ve just wrapped up Fashion Month.

It’s interesting now. Before my time, it used to be that you’d go to all the shows, and then you’d have dinner with an editor or with PR, and then you’d go home and go to bed. But now, you have to tweet, blog, Instagram, TwitPic from the shows; then you go home, download, and do a trend report—so the job now is a lot harder than it used to be. I mean, before, Fashion Week was only about showing the collections that someone was going to put in stores in six months. That is the core of what Fashion Week is. Now, it’s who’s there, who’s in the front row, what’s the drama … So it’s really raised the bar on all of us, and we have to work a little harder.

What stood out to you from the month?

It was the season of the black suit. Dior, YSL, Theyskens Theory, Lanvin—they all opened with black suits. If you’re shopping for suit, get yourself a black suit. A lot of lace on the runway: We saw it at Vera Wang; Rodarte had a bit of harder lace; Reed Krakoff did some lace. Fluorescent florals were also really big: Erdem, Richard Nicoll, Christopher Kane all did techno-florals. So invest in some flower prints.

That’s something else that’s really modern. Before, that argument is something that would have happened behind closed doors. And I’m not taking sides—don’t get me involved in that!—but I will say that I like to see that discussion. I don’t think anyone likes to see a feud, but it’s nice that everyone has their cards on the table. It’s a conversation that I think people weren’t having. I mean Cathy—she had a tiff with Oscar in New York, Hedi came for her in Paris, and I like that those conversations have become public … Now, my brother in Missouri can be like, “That Cathy’s crazy!”

What are you going to be for Halloween?