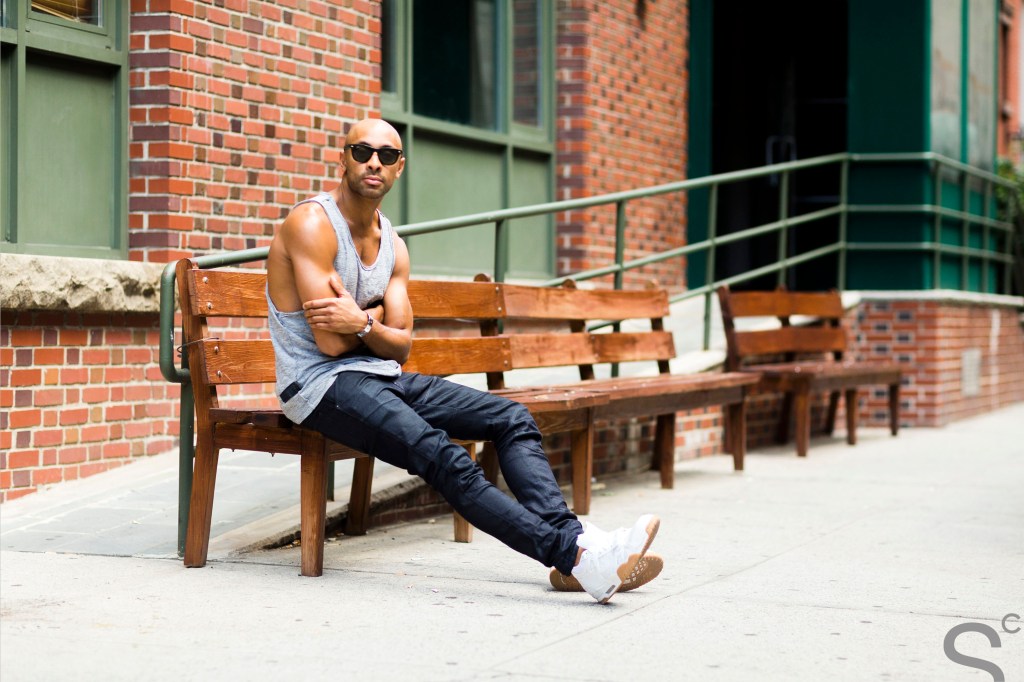 Raised in upstate New York, 33-year-old Sir John (yes, that’s his real name) was never aiming to be a makeup artist. But one thing led to another—namely meeting and working for famed beauty guru Pat McGrath—and now he’s responsible for painting some of the world’s most famous and beautiful faces.

Named a L’Oréal Paris Celebrity Makeup Artist this year, he’s worked with ladies like Joan Smalls, Naomi Campbell, and Beyoncé. “It’s all about playing up her natural features and keeping the skin in really great shape,” he says of his approach. “I like to keep it pretty simple.”

His personal style doesn’t veer too far from that mentality. He showed up to his shoot in jeans in a tank top, showing off his hard-earned muscles and flawless skin.

What do you love about New York City style?
I just got back from a four-week holiday, and whenever I go away, I realize New York has such an independent rock vibe to it. New York just has this electricity that’s part of its DNA in terms of style.

How does New York inspire your personal style and your work as an artist?
I get inspired just walking on the sidewalk with no agenda. Maybe it’s a guy’s vintage coat and how he mixes it with a pair of Adidas? It’s that up-and-down style that makes it home and makes it cool for me.

Tell me about your look.
Your best accessories are tan skin and a toned body—I love to work out. Great style is less about what you layer on and more about your aura and how that emanates. Style isn’t so personal; it has everything to do with how you affect people and how you make them feel. I’m either in a tailored suit or very casual, never anything in between. I’m a little Kanye West, a little Tom Ford, and a little Kurt Cobain.

What brands in particular do you gravitate toward?
I’m huge into activewear. I love what Nike‘s doing right now. It is so scientific and fits really well. It’s not about the look for me—it’s all about the fit. I want to show off that I’ve spent a lot of time at the gym. I’m a minimalist compared with most of my friends, but I feel sexier when I’m doing less.