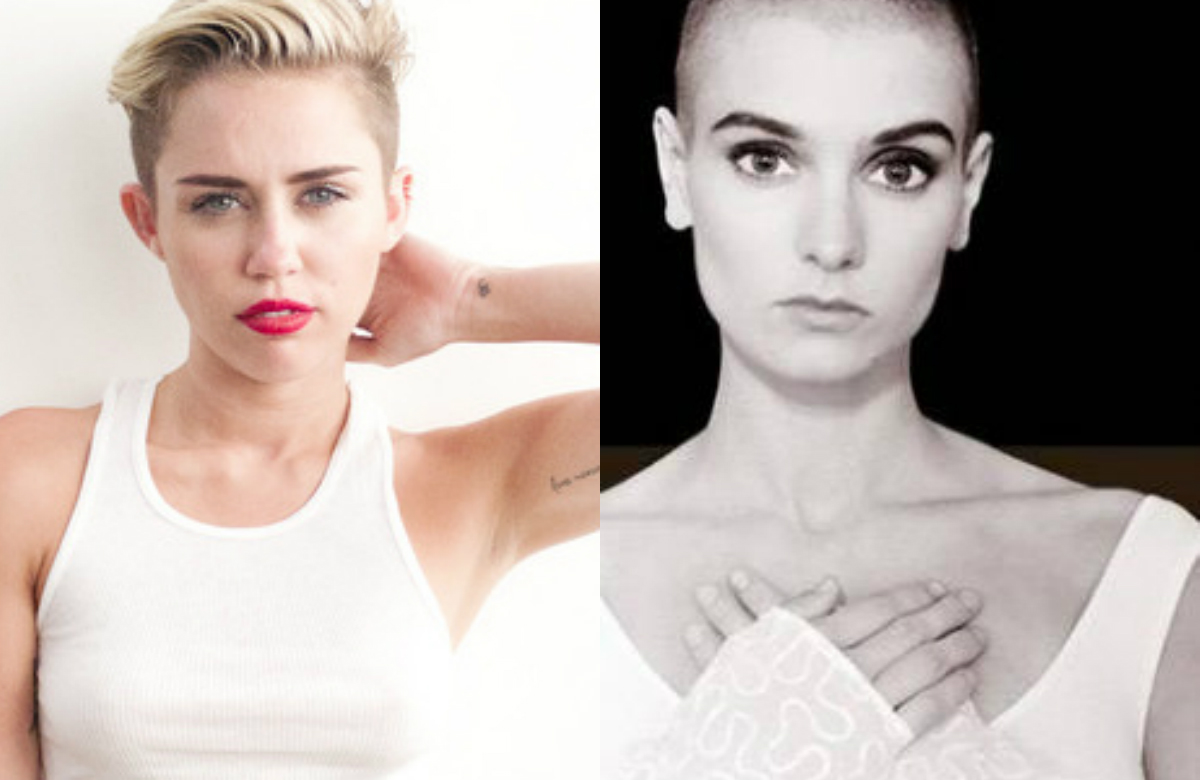 Miley Cyrus in “Wrecking Ball” and Sinead O’Connor in “Nothing Compares to You.”

UPDATE: After yesterday’s hoopla that involved an open letter, some harsh words, and two very different artists, things have escalated into a full-blown social media feud between pop tart Miley Cyrus and 46-year-old Irish singer-songwriter Sinead O’Connor, who decided to berate Miley for her recent actions in a very public open letter.

MORE: We May Have Hit Our Miley Limit With These New NSFW Pics

In the letter—which Sinead said she wrote in “the spirit of motherliness and with love”—she warns Miley against the music industry, which she says will “prostitute you for all you are worth, and cleverly make you think it’s what YOU wanted,“ and also points out that Miley clearly doesn’t care for herself, and that it’s not in any way  “cool” to be naked and licking sledgehammers in  videos. “It is in fact the case that you will obscure your talent by allowing yourself to be pimped, whether it’s the music business or yourself doing the pimping.”

Miley has since bit back—where else?—on Twitter, mostly just being Miley, although one tweet—which read: Before there was Amanda Bynes, there was…” followed by a link to a photo of O’Connor could be considered pretty harsh, as it was a jab at the singer-songwriter’s bi-polar disorder.

This clearly didn’t thrill O’Connor, who penned another open letter on Facebook, which berates Miley (again) for bringing up mental illness, and advises Miley to remove her tweets “immediately or she’ll be will hear from [Sinead’s] lawyers. Check it out below:

Miley… Really? Who the fu-k is advising you? Because taking me on is even more fu–in’ stupid than behaving like a prostitute and calling it feminism. You have posted today tweets of mine which are two years old, which were posted by me when I was unwell and seeking help so as to make them look like they are recent. In doing so you mock myself and Amanda Bynes for having suffered with mental health issues and for having sought help.

…have you any idea how stupid and dangerous it is to mock people for suffering illness? You will yourself one day suffer such illness, that is without doubt. The course you have set yourself upon can only end in that, trust me… Have you no sense of danger at all? or responsibility? Remove your tweets immediately or you will hear from my lawyers. I am certain you will be hearing from all manner of mental health advocacy groups also. It is not acceptable to mock any person for having suffered.

Sinead. I don't have time to write you an open letter cause Im hosting & performing on SNL this week.

Before Amanda Bynes…. There was…. pic.twitter.com/6JZPVnunPc

So if youd like to meet up and talk lemme know in your next letter. 🙂

Then, this morning, O’Connor posted yet another open letter in which she wrote: “I have no interest whatsoever in meeting you. You had plenty of time yesterday to abuse Amanda Bynes .. an entirely innocent party.. and myself.. who also did nothing to deserve your abuse,” adding: “When you end up in the psych ward or rehab I’ll be happy to visit you.. and would not lower myself to mock you.”

Truthfully, Miley’s acting a little like petulant child and probably should have just taken the high road and ignored the letter, which—although it was clearly press bait and might have been presented in a too-public manner—had some pretty spot-on points.

We have a feeling  this is isn’t the last online feud Miley’s going to get into, so until then, we’ll be keeping our eye on this one!

FROM YESTERDAY: While Miley Cyrus‘ antics have won her quite a few famous fans (Jay Z, Pharrell, to name a few), others aren’t quite so amused.

In a scathing open letter to the 20-year-old pop star, Irish singer-songwriter Sinead O’Connor berates Miley for her recent actions, and begs her to stop taking off her clothes.

It’s not as random as it seems considering Miley told Rolling Stone that her naked, sledgehammer-wielding “Wrecking Ball” video was inspired by O’Connor’s iconic video for “Nothing Compares 2 U.” (It’s also not random when you take into account O’Connor’s knack for stirring up controversy—you might recall her infamous 1992 “Saturday Night Live” appearance in which she tore up a picture of Pope John Paul II while saying, “Fight the real enemy!”)

In the letter—which Sinead said she wrote in “the spirit of motherliness and with love”—she warns Miley against the music industry, which she says will “prostitute you for all you are worth, and cleverly make you think it’s what YOU wanted,“ and also points out that Miley clearly doesn’t care for herself, and that it’s not in any way  “cool” to be naked and licking sledgehammers in  videos. “It is in fact the case that you will obscure your talent by allowing yourself to be pimped, whether it’s the music business or yourself doing the pimping.”

And that’s just the first few paragraphs. Read the entire open letter below:

I wasn’t going to write this letter, but today i’ve been dodging phone calls from various newspapers who wished me to remark upon your having said in Rolling Stone your “Wrecking Ball” video was designed to be similar to the one for “Nothing Compares” … So this is what I need to say … And it is said in the spirit of motherliness and with love.

I am extremely concerned for you that those around you have led you to believe, or encouraged you in your own belief, that it is in any way “cool” to be naked and licking sledgehammers in your videos. It is in fact the case that you will obscure your talent by allowing yourself to be pimped, whether it’s the music business or yourself doing the pimping.

Nothing but harm will come in the long run, from allowing yourself to be exploited, and it is absolutely NOT in ANY way an empowerment of yourself or any other young women, for you to send across the message that you are to be valued (even by you) more for your sexual appeal than your obvious talent.

I am happy to hear I am somewhat of a role model for you and I hope that because of that you will pay close attention to what I am telling you.

The music business doesn’t give a sh– about you, or any of us. They will prostitute you for all you are worth, and cleverly make you think its what YOU wanted.. and when you end up in rehab as a result of being prostituted, “they” will be sunning themselves on their yachts in Antigua, which they bought by selling your body and you will find yourself very alone.

Yes, I’m suggesting you don’t care for yourself. That has to change. You ought be protected as a precious young lady by anyone in your employ and anyone around you, including you. This is a dangerous world. We don’t encourage our daughters to walk around naked in it because it makes them prey for animals and less than animals, a distressing majority of whom work in the music industry and its associated media.

You are worth more than your body or your sexual appeal. The world of showbiz doesn’t see things that way, they like things to be seen the other way, whether they are magazines who want you on their cover, or whatever.. Don’t be under any illusions.. ALL of them want you because they’re making money off your youth and your beauty.. which they could not do except for the fact your youth makes you blind to the evils of show business. If you have an innocent heart you can’t recognise those who do not.

I repeat, you have enough talent that you don’t need to let the music business make a prostitute of you. You shouldn’t let them make a fool of you either. Don’t think for a moment that any of them give a flying f— about you. They’re there for the money.. we’re there for the music. It has always been that way and it will always be that way. The sooner a young lady gets to know that, the sooner she can be REALLY in control.

You also said in Rolling Stone that your look is based on mine. The look I chose, I chose on purpose at a time when my record company were encouraging me to do what you have done. I felt I would rather be judged on my talent and not my looks. I am happy that I made that choice, not least because I do not find myself on the proverbial rag heap now that I am almost 47 yrs of age.. which unfortunately many female artists who have based their image around their sexuality, end up on when they reach middle age.

Real empowerment of yourself as a woman would be to in future refuse to exploit your body or your sexuality in order for men to make money from you. I needn’t even ask the question.. I’ve been in the business long enough to know that men are making more money than you are from you getting naked. It’s really not at all cool. And it’s sending dangerous signals to other young women. Please in future say no when you are asked to prostitute yourself. Your body is for you and your boyfriend. It isn’t for every spunk-spewing dirtbag on the net, or every greedy record company executive to buy his mistresses diamonds with.

As for the shedding of the Hannah Montana image.. whoever is telling you getting naked is the way to do that does absolutely NOT respect your talent, or you as a young lady. Your records are good enough for you not to need any shedding of Hannah Montana. She’s waaaaaaay gone by now.. Not because you got naked but because you make great records.

Whether we like it or not, us females in the industry are role models and as such we have to be extremely careful what messages we send to other women. The message you keep sending is that it’s somehow cool to be prostituted.. it’s so not cool Miley.. it’s dangerous. Women are to be valued for so much more than their sexuality. we aren’t merely objects of desire. I would be encouraging you to send healthier messages to your peers.. that they and you are worth more than what is currently going on in your career. Kindly fire any motherf—er who hasn’t expressed alarm, because they don’t care about you.