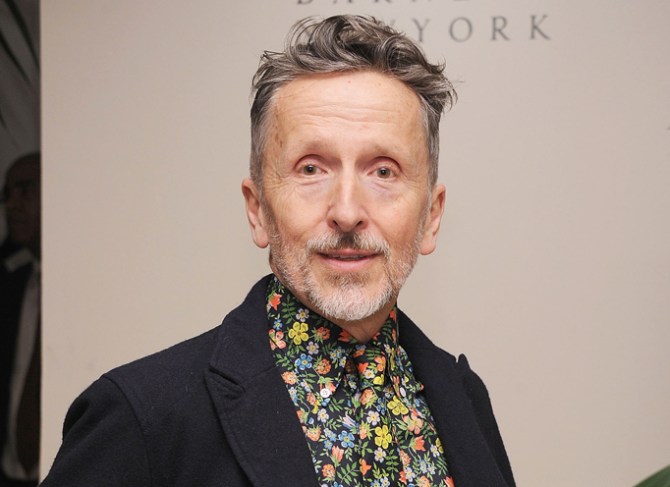 Yesterday, Barneys New York hosted a breakfast to the latest book authored by Creative Ambassador-at-Large (and all-around style maven) Simon Doonan.  The book, The Asylum: A Collage of Couture Reminisces … And Hysteria, seems well-timed to kick off Fashion Week (which Doonan described as a “global spectator sport”), as it tackles the overall madness and eccentricities that surround the fashion industry and fashion people in general. (Buy it now at Barneys!)

Doonan is a master raconteur, and the stories in his new book include his own misadventures on a yacht in Capri with Tom Ford and the “velvet mafia” (hint: the mafia includes Valentino), as well as the cult of supermodel Kate Moss and the rise of the “waif,” which pushed out the “glamazon” models of the ’80s and early ’90s.

Here are some of the highlights from our breakfast with Doonan, in which the longtime industry stalwart gave his thoughts on everything from the death of trends to Miley Cyrus.

His Wildest Fashion Week Moment:
“In the late ’80s, at a Michael Kors show, the ceiling famously fell in. Back then, people would have shows in their showrooms, and people would invite about 30 people, because that’s all you could fit in your showroom. Michael Kors wanted to have the biggest show, so he held his show in a car park, which was a bit mystifying because people weren’t so much showing in funky spaces like that. And he loved all that ’70s disco—like, ‘1, 2, 3, shake your body down!’—and they turned up the volume and shook the ceiling down … onto Suzy Menkes. I remember the dust clearing, looking through this rubble, and seeing Anna Wintour pulling lumps of concrete out of Suzy Menkes’ hairdo.”

On Kate Moss:
“Kate Moss has had this astoundingly enduring career. And she still seems fresh and young and interesting—she’s the cool girl everyone wants to look like. It’s a function of her authenticity—she’s an incredibly authentic person—she is who she is, and people can sense that. Plus, she’s a real natural beauty. Her way of putting herself together—that slightly eclectic ‘I’m going to a rock festival’ … She kind of is the most visible proponent of that bohemian thing where you’re never too turned out. There’s always something slightly off like a little leather bracelet or your hair’s maybe more messy, so that you’re not too ‘done.’ I think that comes from the waif and that comes from Kate.”

On the True Geniuses of Fashion (and Interns with Famous Parents):
“What I observed in fashion is that the people from nowhere — a Galliano, a McQueen, Rick Owens — scrappy outsiders, creative people who have some fire in their loins and something to say, they’ve always made it into fashion. Balenciaga was from a fishing town. People with that passion—Madeleine Vionnet, Alaia from Tunisia—came into fashion because their creativity and their vision was enough to propel them out of that place that they’d come from.  And I tell a story at the end of that chapter where I went to an event and was sitting with all the interns, and they all had really famous last names. They were either the kids of moguls or the kids of movie stars, and I thought, ‘Oh. What’s going to happen to all the people like me?’ Those kids of famous people make great consumers, but I don’t know if they have that inner fire and those inner conflicts that can produce that passionate creativity that really is the gasoline.”

On the Lack of ‘Trends’:
“Well, it seems like nothing ever goes out of style now. Everything is concurrently available. From a style point of view, you could be a rockabilly or a sexy secretary or a goth princess—it’s all concurrently available. I would love to think of something that’s not currently in style—maybe that’s a good question. A friend of mine and I were trying to think of something that wasn’t currently available and the only thing we could think of was, like, a drop-waist denim dress, sleeveless. But I bet you someone’s going to turn that out … That’s why I tell people that, as confusing as it is, it’s actually a great time to be in fashion because it’s all about you. You have to figure out what your look is and then you shop it.”

On Why Women Should Wear Whatever They Want:
“Women can tend to be self-critical and masochistic. Don’t! No one’s keeping score and you can wear anything. Just look at Miley Cyrus … [ed note: Doonan takes a dramatic pause, clearly trying to think of something nice to say] She looked great, I loved that little outfit, it was really groovy. What was that little one-piece? It was so nifty and then she tore it off and had a great little two-piece underneath. It was … nice.”

On Diana Vreeland’s Funeral and Unforgettable Moments:
“I got to work with [Diana Vreeland] and went to her memorial … I was late, and I sat down at an angle. And sitting right next to me was Jackie Kennedy. And Jackie Kennedy, through the whole memorial, bawled her eyes out. She cried all the way through because they were long-time friends, and when Jackie Kennedy was in the white house, there was a lot of correspondence back and forth—’here’s what you should wear,’ ‘thank you for your suggestions.’ So they’d been friends for decades. And then afterwards, Pat Buckley, who was this socialite, she got up and I heard her say, ‘You know, Jacqueline always cries at other people’s funerals because she wasn’t allowed to cry at Jack’s.’ Isn’t that intense? Those things you don’t forget.”

On What He’s Learned Along the Way:
“I’m just hugely grateful to have come from my dismal background of squalor and poverty and clawed my way to a life where I have real creative expression and fun, and I’m involved in the fashion world. In a way, it’s a love letter to the fashion world.”