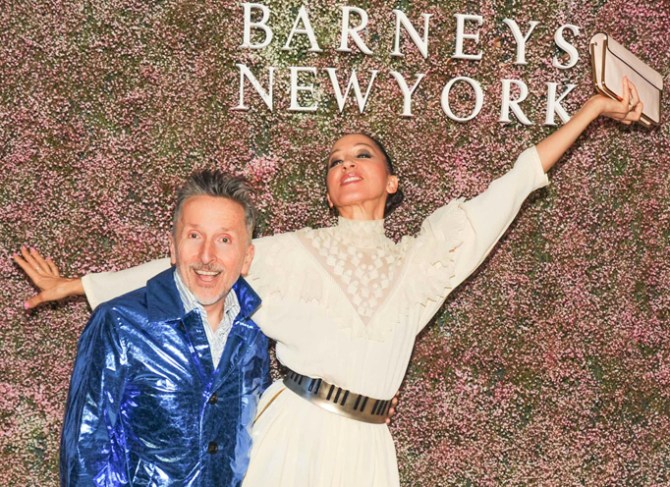 The department store commissioned famed hairstylist Bob Recine to create wonderfully surreal window installations on Fifth Avenue to celebrate the milestone, and the event itself offered a chance to get up close and personal with amazing archival pieces from Chloe collections designed by Karl Lagerfeld, Stella McCartney, and more. Also featured during the party were some spectacular clips from old ’70s fashion shows starring the amazing Pat Cleveland, who not only attended the event, but indulged photographers with a signature twirl in her Chloe dress.

We talked with Barneys’ creative ambassador-at-large, the inimitable Simon Doonan, on the history of Chloe, and why the old-fashioned shows beat today’s runways—hands-down.

How do you feel that Chloe has evolved over the past 60 years?

I’m so old that I remember the beautiful chiffon tea dresses from the early ’70s—you could only buy them at Brown’s in London and they were so exquisite. It’s always been really fun to watch the evolution of Chloe—from Karl to Stella. It’s a great fashion odyssey and it’s a good story.

It’s very hard to look at the old shows because they’re so beautiful and exuberant and fun, and they’re truly diverse. You have all these beautiful black girls, and they didn’t use them because they felt they had to; they used them because Iman and Pat Cleveland and Dalma are just unbelievably beautiful girls. So the exuberance and the creative expression in the early shows … I’m sorry, there’s something missing from contemporary shows in general. There’s a coldness that’s hard to look at after these ’70s shows, where there was all this creative exuberance. And personality!

You know, Pat Cleveland is like a firecracker, but Iman is like a panther—they’re all different, there were different personalities. Somebody recently asked me if, in the future, “Will clothes at fashion shows be shown on robots?” And I said, “Clearly, you haven’t been to a fashion show in a while, because it’s already happened.” It’s very robotic, and you look back at these shows where there was so much personality, and I know that fashion people are creative and they’ll see the magic of that and swing back. But it might take a little while.

Now that Chloe is turning 60, what do you feel has been most iconic about the brand?

So what’s the one thing people should buy from the Chloe collection on the floor at Barneys right now?

Something pale and beautiful and translucent.