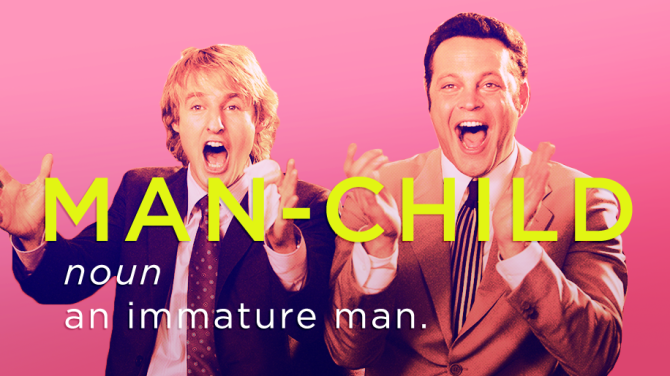 Your boyfriend may look like a man, but if his actions seem to reflect those of a 17-year-old boy, you may have yourself a “man-child.” We’re not talking about a guy who loves to play video games all day and eat Cap’n Crunch for dinner; this is about the deeper issues that can prevent you from having the relationship you want and deserve—now and in the future.

Not sure whether this term accurately describes your guy? Here are 10 signs you’re in a relationship with a man-child.

He lives only in the present.

Unless they’re wondering if they can have Oreos for dinner, children don’t think about their futures much. So if the guy you’re dating can’t make plans—for tomorrow or two years from now—he’s living in the here and now. “Adults plan futures, strategize how they can reach those future goals, and take action now in service of those goals,” says psychologist and radio host Dr. Cooper Lawrence. Children and immature men don’t do this. “[They] can’t think too far ahead because they are incapable of seeing their future selves in a clear light,” she notes.

He doesn’t pick up after himself.

This can relate to anything from picking up his clothes around your living space to picking up the tab on dates—or even his unpaid debts. “Are you making excuses for his behavior and rationalizing his poor choices?” asks Dr. Jill Weber, psychologist and author of Having Sex, Wanting Intimacy: Why Women Settle for One-Sided Relationships. “When people do not fully grow up, they farm out the hard work of adulthood to those closest to them,” she says. That person is likely you.

This could mean anything from making spontaneous, big purchases to kissing someone outside the relationship. “Children’s brains are not fully developed, so they don’t have the capacity to think about or appreciate the consequences of their actions,” says Lawrence. That’s why we do stupid things as teenagers. If your man is impulsive and acts first and apologizes later, it shows a huge level of immaturity.

He’s a little too close to his mother.

We love a man who’s close with his family, but if he has a bizarre, childish relationship with his mother, know that you likely won’t be the leading lady in his life, says psychologist Dr. Jeff Gardere. “Along similar lines, if he cancels dinner and other plans with you to spend time with his family, borrows money from his parents without paying them back, and still lets his mother influence—or make—all his decisions, those are red flags,” he says.

Does it seem like he’s always the only one getting off? If your most intimate moments are about meeting his needs and not yours, we’re sorry to say he’s absolutely a man-child. “Your sexual chemistry is a reflection of your relationship,” says Lawrence. “So if he acts self-centered between the sheets, there is a good chance his emotional maturity level is pretty bad in other areas.”

Or, he just doesn’t know how to handle one maturely. When deep issues arise, does he make a joke, change the topic, look at his phone and ignore you, or turn the tables and blame you? “The last thing a man-child wants is confrontation, and he will do anything to stop it in its tracks,” says Weber. Similarly, he’ll have a hard time owning up to his mistakes. “When you try to bring up something serious, pay attention to whether you’re the one who ends up apologizing and notice if the original point of the argument even gets addressed,” she says.

His interests and friendships seem middle-schoolish.

Does he act like a teenage boy when he’s with his buddies or not properly introduce you to his friends? “This man-child would rather go to Comic Con or play Frisbee with his friends than spend a weekend away with you,” says Gardere. Weber also notes in an article for Psychology Today that “men who never grow up don’t know how to deal with adult women; they revert to their adolescent ways out of discomfort with intimacy and to protect themselves from getting too close to you.”

He only talks about surface-level stuff.

Mature people know how to connect with others on a deeper level. If he can’t seem to have a conversation where he talks about his life, fears, past, and all the things that make couples connect, he’ll never bond with you. “If he is keeping the conversation very surface and even spends time making fun of friends or coworkers, it shows he doesn’t have the capability to have a mature and adult relationship,” says Lawrence.

He brushes off your family and friends.

Because a man-child lives with one foot out the door, he may see meeting your family as a big step. Refusing to meet your parents and hang out with your friends isn’t just indicative of a man-child, it’s also rude. “It’s hard to have a thriving adult romantic relationship with someone who is glorifying his college years and only wants to hang with the guys,” says Weber. A man who respects and loves you will respect the people you love and who love you too.

Any mention of children or commitment makes him panic.

If after a reasonable amount of time—and this should not be years—you can’t bring up the future on any level (kids, home, pets, marriage), well, guess what? This is textbook man-child. “This behavior is strange,” notes Weber. “After all, just talking about what you want or don’t want doesn’t mean it’s going to happen or that you are certain you even want it with him. It is just a talk, and you deserve to know if your partner wants the same things you do,” she says.