Remembering a Hollywood icon. Sidney Poitier‘s net worth doesn’t even begin to compare to his priceless contributions to Hollywood, but it does include salaries from some of his most notable projects over the years, including Lilies of the Field and To Sir, With Love.

Poitier—whose full name was Sidney L. Poitier—was born on February 20, 1927, in Miami Florida to Reginald and Evelyn Poitier. His parents were tomato farmers from the Bahamas who traveled regularly to the U.S. to sell their produce, and it was during one of these trips that Poitier was born in Florida. Shortly after he was born, Poitier and his family returned home to the Bahamas where he was raised alongside his six older siblings. At the age of 11, Poitier and his family moved from Cat Island to Nassau, the capital of the Bahamas. It was here that Poitier experienced the magic of the movies for the first time and fell in love with the thought of becoming an actor one day.

Four years later, Poitier returned to Miami to live with his brother Cyril before packing up his bags again to move to New York City at the age of 16. After briefly serving in the army during World War II, Poitier got a job as a dishwasher and started learning how to read. One day, he saw an advertisement for actors in the newspaper and went to an audition at the American Negro Theater. While he was initially turned away due to his strong Caribbean accent and reading skills, Poitier was still determined to become an actor. He continued working at the restaurant and listened to radio broadcasts during his shifts to improve his speaking abilities. Soon, Poitier returned to the theater and began working as a janitor in exchange for acting lessons.

However, Poitier’s first stab at theater wasn’t entirely successful. The actor was initially rejected by audiences as he couldn’t sing and spoke with a thick accent. He spent the next six months refining his acting skills and softening his West Indian accent—and his commitment paid off. The actor was given the leading role in a production of the Greek comedy Lysistrata. While the play ran for only four days, his brief appearance impressed audiences enough to land him more roles on stage and eventually, on screen. 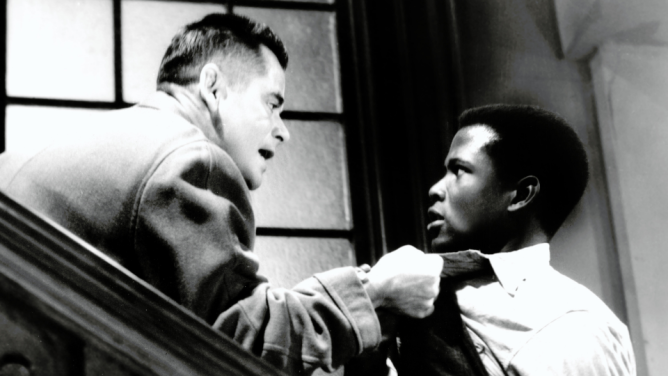 In the late 1940s, Sidney continued to book many leading roles in Broadway productions before receiving an offer to make his film debut in No Way Out, where he played a doctor harassed by the racist brother of a man whose life he couldn’t save. The film helped to jumpstart Poitier’s career in Hollywood. Within years, the actor landed his breakthrough role in 1955’s Blackboard Jungle.

Continuing his career, Poitier went on to star in films such as 1956’s Good-bye, My Lady and 1958’s The Defiant Ones. The latter film was met with critical acclaim, and it earned Poitier his first Academy Award nomination, making Poitier the first Black male actor to be ever nominated for a competitive Oscar as best actor. He continued to appear on Broadway throughout this period, including his performance in the first Broadway production of A Raisin in the Sun in 1959. The production paved the way for Black performers in theater, as it was among the first to offer any representation of this kind on Broadway.

Shortly after developing his role on the stage, Poitier appeared in the film version of Lorraine Hansberry’s A Raisin in the Sun before starring in 1963’s Lilies of the Field, where he played the part of a handyman who encounters a group of nuns. With this role, he became the first Black man to receive an Academy Award for Best Actor. While Poitier was recognized for this accomplishment, he worried that he was still being tokenized in Hollywood as one of the only major black actors in the industry at the time. 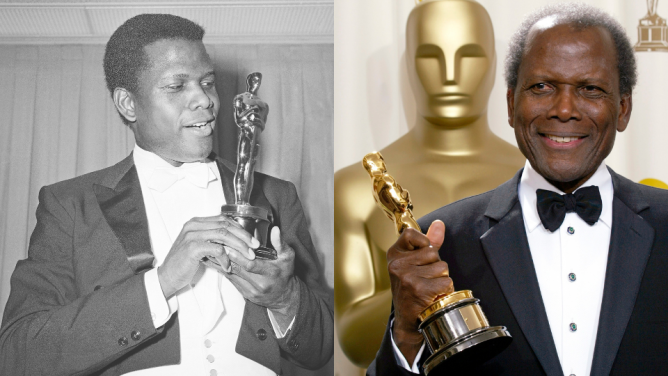 These concerns spurred Poitier to withdraw from Hollywood for a period. During this time, the actor focused on his activism amid the Civil Rights Movement before returning to the industry in the late 60s with blockbuster films like To Sir, with Love, Guess Who’s Coming to Dinner and In the Heat of the Night, each of which dealt with issues of race. As the decades progressed, he not only appeared in a variety of films but also began directing films like 1980’s Stir Crazy, starring Richard Pryor and Gene Wilder, along with A Warm December the following year and Uptown Saturday Night in 1974.

By the 2000s, Poitier’s acting career had slowed down considerably, but he continued to receive a number of awards and accolades in recognition of his trailblazing work throughout the years. In 2000, Poitier was awarded the Screen Actors Guild Lifetime Achievement Award. Later that year, the actor published his autobiography, The Measure of a Man: A Spiritual Autobiography, for which he was later awarded a Grammy Award for Best Spoken-Word Album for his reading of the book. The following year, Poitier was recognized with the NAACP’s Hall of Fame Award along with an honorary Academy Award in 2002 in honor of his longstanding career.

What was Sidney Potier’s Lilies of the Field salary?

Lilies of the Field, which was based on a 92-page novella by William Edmund Barret, tells the story of carpenter Homer Smith. One day, while wandering the Arizona desert, Smith stumbles upon a convent of nuns and decides to help the impoverished women with odd jobs in exchange for meals. However, the mother superior and leader of the nuns is convinced that Smith was sent by God, and soon enough, the carpenter finds himself building a chapel under the scorching sun. 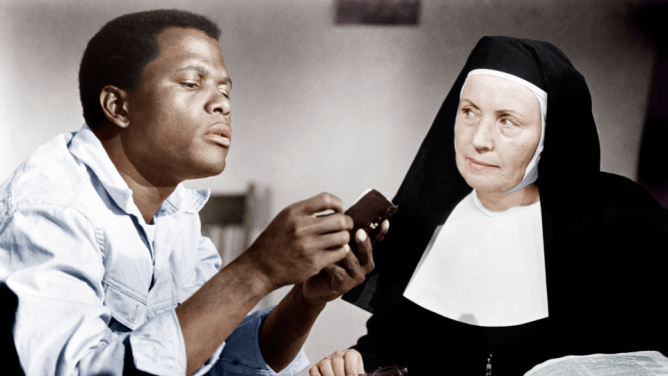 Image: Sidney Poitier and Lilia Skala in 1963’s Lilies of the Field. Courtesy of Everett Collection.

Lilies of the Field director Ralph Nelson was working on a tight budget to produce the film—so tight, in fact, that Nelson put up his own home as collateral to make sure the film could be completed. When Poitier was approached for the role of Homer Smith, the actor famously gave up his usual salary and agreed to do the film for a smaller fee and a percentage of the profits, according to IMBd. While it’s unclear what Portier’s base salary ended up being, his gamble clearly paid off. Lilies of the Field went on to become a huge box office success, earning an estimated $7 million at the box office and landing Poitier his first Oscar for Best Actor thanks to his role in the film.

What was Sidney Potier’s To Sir, With Love salary?

Much like Lilies of the Field, 1967’s To Sir, with Love was based on a book. The story, inspired by E. R. Braithwaite’s 1959 autobiographical novel of the same name, follows American immigrant Mark Thackeray while he lives in the United Kingdom. After graduating with a degree in engineering, Mark struggles to find employment. In order to make ends meet, he becomes a teacher at an East End London school filled with troublemakers and school rejects. While the students initially view him as another teacher to bully, his genuine interest and empathy eventually inspires them enough to respect him. 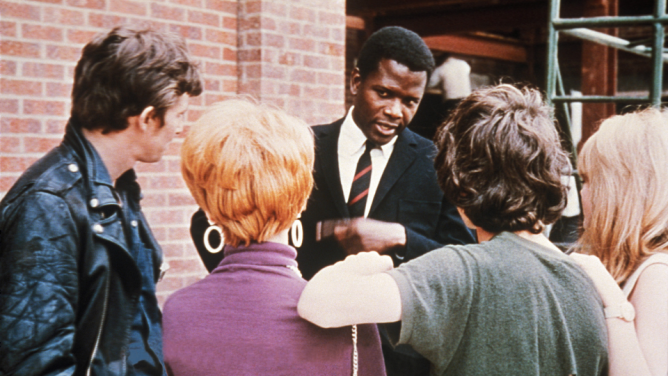 Image: Sidney Poitier in 1967’s To Sir, With Love. Courtesy of Everett Collection.

To Sir, With Love initially struggled to find a studio interested in producing the film on American soil. Eventually, Columbia bought the rights to the film—but the budget provided was a meager $750,000. Once again, Poitier agreed to take on a risky pay cut by giving up his salary for the role. Instead, the actor reportedly agreed upon just 10 percent of the gross box office earnings. Thankfully, To Sir was a massive success, earning a reported $22 million in gross box office sales at the time of its release in 1967. At his 10 percent rate, this means Poitier would have earned an estimated $2.2 million as his salary for To Sir, With Love.

What was Sidney Poitier’s net worth? 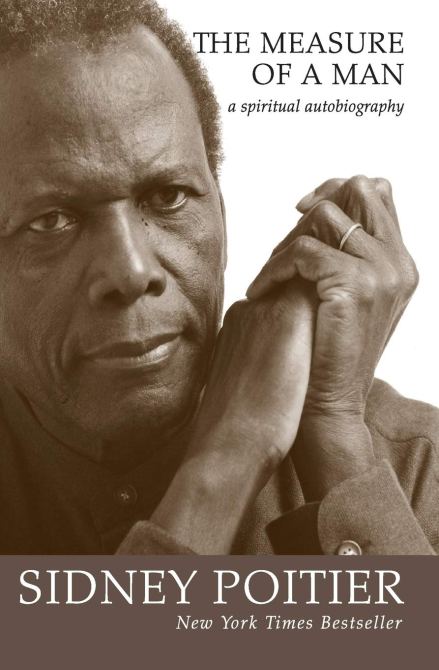 For more about Sidney Poitier, read his 2007 autobiography, The Measure of a Man: A Spiritual Autobiography. The New York Times best seller looks back on the Oscar winner’s life and career, from his childhood on the tiny Cat Island of the Bahamas to his roles in movies like A Raisin in the Sun and Guess Who’s Coming to Dinner? “In the kind of place where I grew up,” Poitie writes in The Measure of a Man. “What’s coming at you is the sound of the sea and the smell of the wind and momma’s voice and the voice of your dad and the craziness of your brothers and sisters…and that’s it.” The book—which explores the measures that make Poitier a man, husband, father and an actor—also sees the award-winning actor reflect on the racial barrier he overcame to become one of the most successful stars in the Golden Age of Hollywood. “I have no wish to play the pontificating fool, pretending that I’ve suddenly come up with the answers to all life’s questions,” Poitier writes in The Measure of a Man
. “Quite that contrary, I began this book as an exploration, an exercise in self-questing. In other words, I wanted to find out, as I looked back at a long and complicated life, with many twists and turns, how well I’ve done at measuring up to the values I myself have set.”