The year is 1979. The Incredible Hulk, starring Bill Bixby and Lou Ferrigno, is in its third season at CBS. It continues to be a ratings success, yet the owners of the character at Marvel Comics are nervous. After seeing series producer Kenneth Johnson retool The Six Million Dollar Man into The Bionic Woman, Marvel executive Stan Lee is determined to beat him to the punch and homegrow a woman version of the green meanie before Johnson can get the idea. Come November, comic fans witness the birth of a new hero: Jennifer Walters, a.k.a. She-Hulk. After being critically wounded in a shootout, youngWalters receives an emergency transfusion from her older cousin Bruce Banner, a.k.a. The Hulk. And just like him, she soon discovers that when fearful or enraged she transforms into The Savage She-Hulk. Although her origin was more shrewd capitalism than pure creative impulse, She-Hulk went on to become a mainstay in the Marvel Universe and was at one time their only real answer to Wonder Woman. She’s finally bounding onto the silver screen 40 years after her first appearance. So has the wait been worth it? Jury’s still out.

The tightrope act of story and spectacle isn’t one Marvel has always managed to cinch.

The first face we see in the pilot of Disney Plus’ She-Hulk: Attorney at Law, titled “A Normal Amount of Rage”, is that of Tatiana Maslany, who’s been attached to the role since 2020. Parks and Recreation fans will remember her brief stint as Dr. Nadia Stasky, but of course her breakaway came in the Canadian sci-fi hit Orphan Black, which ran for five seasons and garnered her three major acting awards, including an Emmy. Whether she’ll be flexing those muscles in this series remains to be seen, since Marvel’s current business model sometimes necessitates more flair than finesse from its leading faces. Luckily for them Maslany also brings 10-kilowatt charisma to Jen Walters, a determined but self-conscious young lawyer who has the ability to transform into a Hulked out version of herself. On her way to the courtroom she pauses to address the audience (an homage to writer John Byrne’s iconic Sensational She-Hulk series) to tell us how she acquired this particular ability. 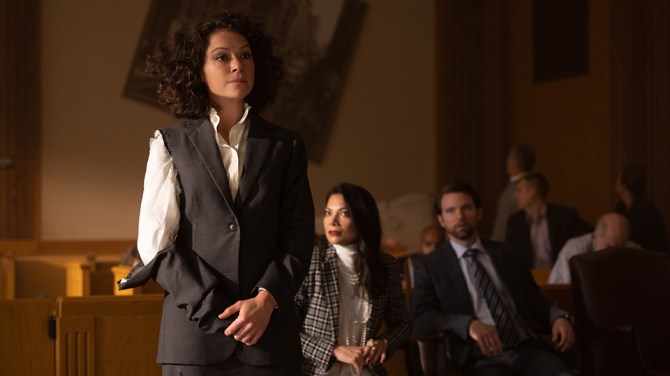 In a departure from the source material, Jen and Bruce Banner (Mark Ruffalo) are both injured in a car crash. Jen sustains a bad cut, and Bruce’s blood accidentally drops into it, almost instantly triggering her first transformation. Admittedly this moment, like a lot of what follows, feels rushed. Putting aside prior knowledge of the comics, Bruce has been established in this franchise as exceedingly reclusive beyond his connection to the Avengers. Having a cousin isn’t out of the question, but the specifics of Bruce and Jen’s relationship are almost entirely unexplored in the episode. Instead, we meet them in the midst of a conversation about Captain America’s love life (because the protagonist of a Disney-Marvel show must be an obsessive fan) to set up a running joke for the half hour. The Marvel brand of comedy isn’t reinvented here, but it doesn’t overwhelm either. Choosing to include “Attorney at Law” in the title indicates that the show will lean on the legal procedural formula to some degree, and the creators have cited Ally McBeal and Legally Blonde as tonal influences. No doubt a great deal of the comedy will come from the cases Walters has to prosecute, as well as the dating foibles of a seven-foot-tall, olive-skinned Amazon. 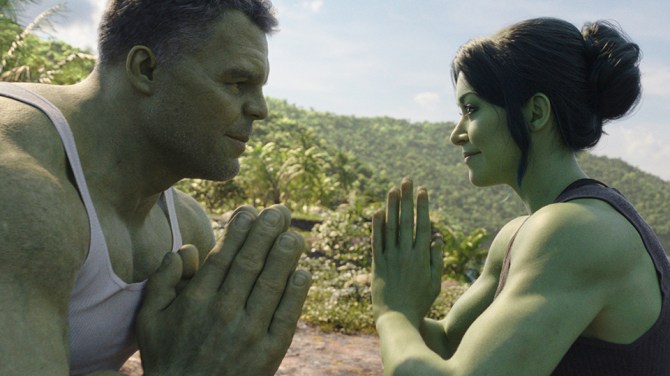 Though it could’ve done more, the first episode does lay some groundwork about Jen’s worldview. Of particular interest is Jen’s almost effortless synthesis with her irradiated form. In her early stories, the key distinction between Walters and her cousin was that she maintained lucidity and control when she transformed, something Bruce has only ever temporarily been able to do. When he lectures her on the importance of controlling her emotions, she cites her lived experience as a regular woman sustaining condescension from male colleagues, catcalls from drunk bar patrons, and insults from spurned suitors without showing any emotion as exactly the quality that makes her better at balancing this condition than he may ever be.

Indeed, balance may be the key theme of this series in more ways than one. Each episode of She-Hulk will only time out to roughly 30 minutes, and yet the show must harmonize the development of this major character and the continued setup of Marvel’s larger narrative. Since the episode ends rather abruptly with Jen flattening an unnamed superhuman who bursts into the courtroom, we don’t really get to learn what her dramatic problem is or what goals she has. Perhaps her arc will be embracing her Hulk form, and maybe even deciding to remain in it permanently as she has done before in the comics—not because anyone told her that she has to do it, but because she feels genuinely fulfilled that way. It would be one route to take, especially as the series has already made a strong statement on the constant surveillance and suppression of women. But the tightrope act of story and spectacle isn’t one Marvel has always managed to cinch. With only eight episodes left, we’ll see what kind of case She-Hulk can make for herself.

Marvel’s She-Hulk: Attorney at Law is available to stream on Disney Plus.