Shay Mitchell wants everyone to know that she was, indeed, in Hong Kong. After we published this story showing that at least some of Mitchell’s vacation pictures were stolen from outside sources (such as travel blogs and tourism websites) without giving photo credits, Mitchell posted an Instagram with a caption alluding to the story. “View so nice it almost looks… fake,” she captioned a photo of her overlooking Shanghai’s skyline.

In another Instagram of Mitchell in front of Hong Kong’s Montane Mansion, also known as the Monster Building, Mitchell assures fans that she was there. “I was here. Montane mansion, Hong Kong,” she wrote. A picture of the Monster Building, with the caption “Night Views,” on Mitchell’s Instagram story was the first photo that prompted our investigation after we noticed a mouse cursor in the bottom corner.

The actress has since edited the captions of several other Instagrams to credit them to the original source, such as Tumblr or Pinterest. She has also begun adding credits to new Instagrams, informing followers that a photo is from an outside source or taken herself.

Since publishing our original story, we have reached out to multiple times to a representative for Mitchell, but have not received a reply.

If you follow Shay Mitchell on Instagram, you’re familiar with the dozens of wanderlust-worthy photos she posts from her trips to destinations like Greece, India, and South Africa. But after an investigation into the pictures from the 30-year-old’s recent vacation in Hong Kong, it seems like at least some of her travel Instagrams appear to be fake and stolen from an outside source.

Over the weekend, the “Pretty Little Liars” actress shared several photos and videos from her trip to Hong Kong on her Instagram story. The pictures featured Mitchell feasting on dim sum, walking through the streets of Hong Kong, and enjoying the city’s sights. But there was one shot in particular that caught our eye.

On her Instagram story, Mitchell posted a photo of Hong Kong’s historic Monster Building, a 60-year-old, highly Instagrammable residential complex in the city’s Quarry Bay. “Night Views,” she captioned the shot. The picture looked like any other shot Mitchell shared from her vacation, until we noticed a peculiar mouse cursor in the bottom left corner.

The detail prompted us to reverse-image search the picture, which led us to a travel blog by the photography company Canon. The blog highlighted several tourist attractions in Hong Kong, including the Monster Building. In the section describing the Monster Building, Canon included a picture of the complex that looked awfully similar to Mitchell’s.

After analyzing the pictures side-by-side, it appears that they are identical, with the exact same cloud shapes and laundry hangings. The only difference is that Mitchell’s is cropped, angled, and uses a filter. The mouse cursor and grainy quality of Mitchell’s Instagram story are other indicators that the photo might have been pulled from the internet rather than snapped on her own phone.

MORE: The Top 20 Celebrities to Follow for Ultra-Glam Travel Inspiration 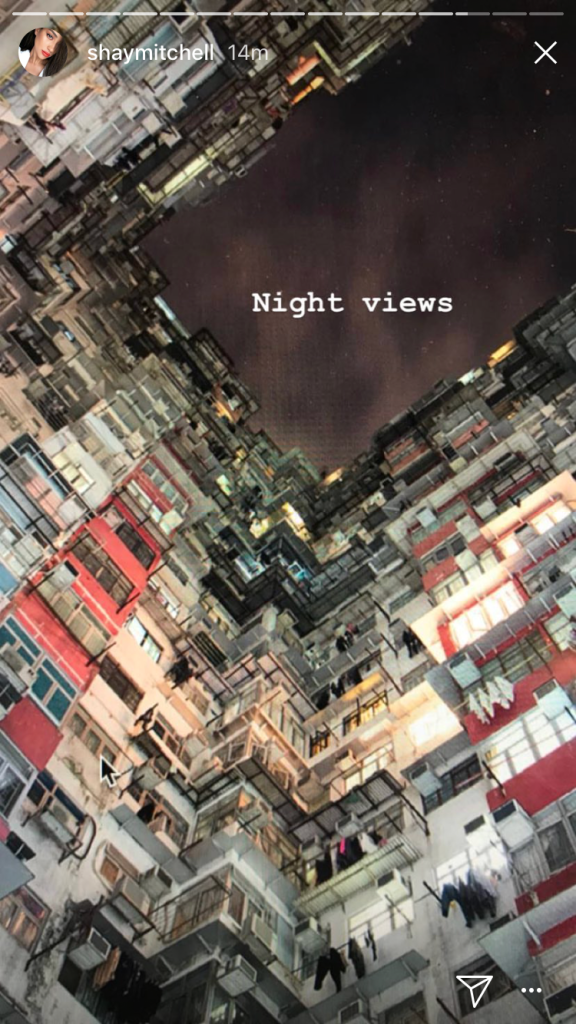 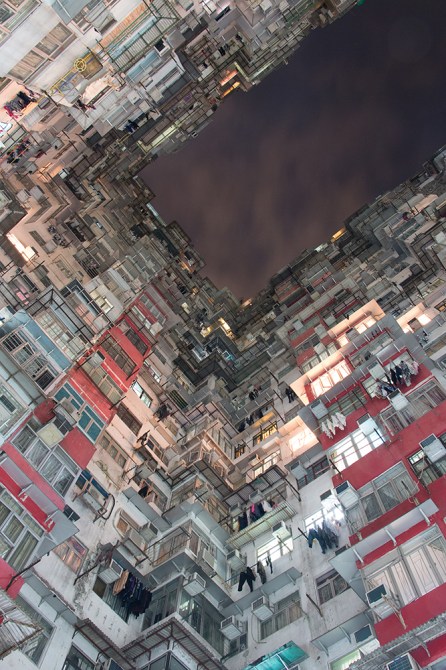 Though there isn’t a time stamp on Canon’s blog, the post features camera settings and other photos from the same photographer, so we’re going to assume that Mitchell—who’s likely too busy enjoying her time in Hong Kong to write hotspot recommendations on a camera company’s website—isn’t the author.

This isn’t the only Instagram that Mitchell might have stolen. Recently, the actress posted an Instagram of a pastel-colored building, which she claimed was from her trip to Hong Kong. “When buildings inspire your next nail polish change 💅🏼 #pastels#ShaycationHongKong,” she captioned her Instagram. After a search, it appears that the picture from 2014 and is from photographer Jan Vranovsky, who took it in Tokyo, Japan—not Hong Kong. “Your Hong Kong looks a lot like Japan,” one fan commented.

From her trip to Shanghai, Mitchell posted an Instagram of the city’s Jing’an Temple, a 780-year-old Buddhist shrine. The picture featured the building with several tourists crowded around it taking pictures. Another Instagram posted by the account @shanghainowandthen in 2016 shows the same tourists in the same positions. The only difference was Mitchell used a more saturated filter.

Mitchell also posted an Instagram of a building with a round entryway and a red door, which she also suggested was from her trip to Shanghai. “SHANGHAI,” she captioned the picture. The original photo appears to be from Shanghai tourism pages on Pullman Hotels and the travel bookings website Isango!, which highlight different tourist attractions, including the Yu Garden, where the photo was taken. Mitchell’s picture, which is zoomed in, appears to show the same tree and surrounding greenery.

From her China trip, Mitchell also suggested that she visited Xi’an, an ancient city in central China, when she posted an Instagram of the city’s world-famous Terracotta Warriors. “Terracotta Army : Xi’an,” she captioned the picture. The picture looks identical to one posted by the tourism website My Little Adventure.

Now, we’re not accusing Mitchell of faking all of her travel Instagrams. As you can see, many of them include her in them and look totally authentic. But in some cases, the pictures do appear to be from Google. No worries, Shay. We all have social media slip-ups sometimes. But maybe next time, move your mouse.