As a four-time Olympian, three-time Olympic gold medalist and X-Games gold medal world record holder, it’s easy to understand why Shaun White’s net worth is as impressive as it is today. But what is it, exactly?

White—whose full name is Shaun Roger White—was born on September 3, 1986 in San Diego, California. When he was a baby, White underwent three open-heart surgeries to treat a heart condition known as Tetralogy of Fallot, which is a rare combination of four congenital heart defects. Thankfully, his surgeries were a success. The future Olympian enjoyed an active lifestyle as a child, growing up in Southern California alongside his family. White is the youngest of three siblings: he has a brother, Jesse, and a sister, Kari. Their mother Cathy was a waitress, while their father Roger, a former surfer, worked for the San Clemente water department. Together, the White family would often spend their time at the Bear Mountain and Okemo Mountain ski resorts—and it was here where White got his first introduction to snowboarding.

It didn’t take long for White to attract attention. By the time he was 7 years old, White was already winning snowboarding competitions of his own and receiving sponsorship deals. Around the same time, White took up skateboarding. He met professional skateboarder Tony Hawk when he was 9 years old at the YMCA skate park in Encinitas, California, and Hawk went on to befriend and mentor the young skateboarder. “Tony never really sat me down and said you should do this or do that. He was always leading by example,” White said in 2020. “It was just so awesome to be around somebody gaining this level of success, going through things I was just about to go through myself.”

With Hawk’s help, White was officially a pro skateboarder by the time he was 17. Since then, White has gone on to win several titles for skateboarding, including the overall title of Action Sports Tour Champion. His skills in the sport also allowed him to become the first person to ever compete in and win both the Summer and Winter X Games in two different sports.

While his talents at the skate park are no joke, it is his skill on the slopes that continues to command the most interest by fans and sponsors alike. Since going pro, White has won a number of awards as a snowboarder. When he was 16, White won the U.S. Open Snowboarding Championship, making him the youngest athlete to do so. Three years later, he won his first Olympic gold medal at the 2006 Winter Olympics. He went on to compete and represent the U.S. at the Winter Olympic Games in 2010, 2014, 2018 and 2022. Meanwhile, in Europe, White also won the Austrian snowboarding contest Air & Style two years in a row in 2003 and 2004.

As if these accolades weren’t enough to stun you, just wait until you see Shaun White’s net worth. For everything we know about how much Shaun White is worth—including his salary and how much he makes at the Olympics—just keep on reading.

What is Shaun White’s Olympics salary? 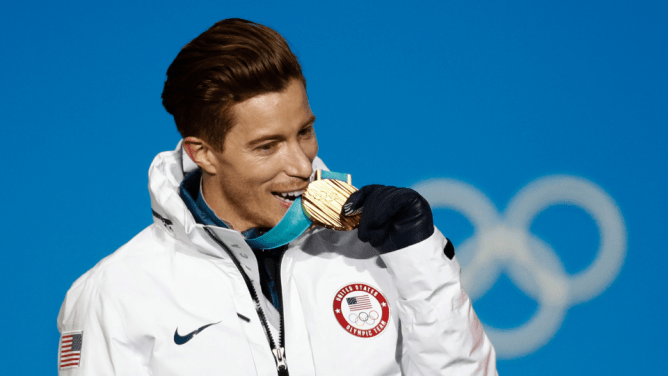 If you thought his winning record was impressive, just wait until you hear how much White stands to make during the Winter Olympics. While athletes aren’t paid just for competing, the U.S. Olympic Committee does offer hefty reward funds to any athlete who can bring home a medal for America. According to USA Today, U.S. Olympians are eligible to earn $37,500 for each gold medal they win, $22,500 for each silver and $15,000 for each bronze. In team sports, team members split the pot evenly; but when it comes to individual rounds, solo players get the whole prize pot for themselves.

These figures mark a 50 percent increase from the 2016 Olympics and were put into practice during the 2018 Winter Olympics, where White took home the gold for the Men’s Halfpipe event with a score of 97.75. This win made White the first snowboarder to win three Olympic gold medals and the first American male athlete to win gold at three different Winter Games—not to mention, it earned him that $37,500 prize money!

How much does Shaun White make per year?

According to Celebrity Net Worth, Shaun White makes around $10 million per year. His yearly earnings are made up of his corporate endorsements and sponsorships. White landed his first sponsor, Burton Snowboards, when he was only seven years old. The 10-year deal was the first of many endorsements by brands including Oakley, Inc., Birdhouse Skateboards, Park City Mountain Resort, Target Corporation, Red Bull, Ubisoft, Adio, Hewlett-Packard and American Express, among others. Forbes once estimated that White earned $9 million from endorsement deals in a given year alone, rounding out to around $2 million per deal.

What is Shaun White’s net worth?

For more about the Olympics, check out Jeremy Fuchs’ 2021 book, Total Olympics: Every Obscure, Hilarious, Dramatic, and Inspiring Tale Worth Knowing. The book, which was called an “indispensable Olympic resource” and “pure fun” by The New York Times, follows the history of the Olympics, from how it began in a Victorian English town called Much Wenlock to the discontinued sports that are no longer around like tug of war, firefighting, painting and, yes, live pigeon shooting. The bestseller, which features hundreds of true tales and historical photographs, also includes stories from both internationally known and little known athletes like gymnast Shun Fujimoto, who led his team to victory with a broken knee.