Does she mind? Shanna Moakler’s reaction to Travis Barker’s Kourtney Kardashian tattoo gives us an idea of where her head is at now that her ex-husband covered up a tattoo of her name.

The Blink-182 drummer took to Instagram on Monday, October 25 to show off some new ink, which included a new scorpion tattoo and another tattoo of his fiancée Kourtney’s lips. Travis included photos of the pieces in a gallery captioned “scorpio season,” and in the flicks, fans could see that the tat of Kourtney’s lips was covering up an old tattoo of a heart that was once inscribed with his ex-wife Shanna’s name. While this isn’t the first time Travis has gotten a tattoo in honor of Kourtney, it does mark his first ink after their engagement—and his ex-wife seemed to take notice.

Shanna, 46, took to her Instagram Story just hours after Travis posted the photos of his new tattoos to his profile. While she didn’t mention her ex-husband or his new fiancée by name, the model appeared to react to his tattoo coverup with a still from the 1993 film, Point of No Return. “I never did mind about the little things,” it read. Shanna, who shares kids Landon, 18, and Alabama, 15, with Travis,  also added a lipstick print emoji to her post as if to nod as his tattoo of Kourtney’s lips. 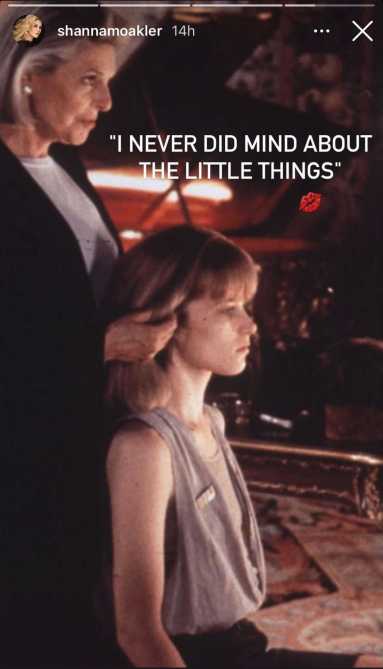 This isn’t the first time Shanna has shared a cryptic post responding to news about her ex-husband and the Keeping Up With the Kardashians alum. After Kourtney and Travis announced their engagement on October 17, the former Miss New York took to her Instagram Story to suggest how unbothered she was by their new relationship milestone.

The former reality star—who was married to Travis from 2004 to 2006—posted a quote by the late rapper Tupac, which read, “Before you ask why someone hates you, ask yourself why you give a fuck,” along with a heart emoji. She followed the quote with a second message: “Temporarily Closed for Spiritual Maintenance.” Clearly, Shanna’s back from her spiritual break—and she doesn’t mind if everyone knows it.