Telling us how she really feels! Shanna Moakler’s reaction to Travis Barker and Kourtney Kardashian’s engagement suggests that she’s not all too pleased to see her ex-husband moving on with the Keeping Up With the Kardashians alum.

Shanna, 46, took to her Instagram Story on Monday, October 18, to share a pair of cryptic messages after news broke of Travis and Kourtney’s engagement. The former Miss New York—who was married to Travis from 2004 to 2006—posted a quote by the late rapper Tupac, which read, “Before you ask why someone hates you, ask yourself why you give a fuck,” along with a lone heart emoji. But that’s not all. Shanna went on to share a second message to her Instagram Story: “Temporarily Closed for Spiritual Maintenance.” Well, then!

While this isn’t the first time Shanna has subtly (and not-so-subtly) addressed her feelings about the Blink-182 drummer and the Poosh founder’s romance, it does mark a shift in her relationship with her ex-husband, as he’s now officially on track to marry Kourtney. The Keeping Up With the Kardashians star first announced the news of their engagement in an Instagram post on October 17, 2021, sharing a photo of her and her now-fiancé on a beach surrounded by candles and roses. “forever @travisbarker,” she captioned the photo. 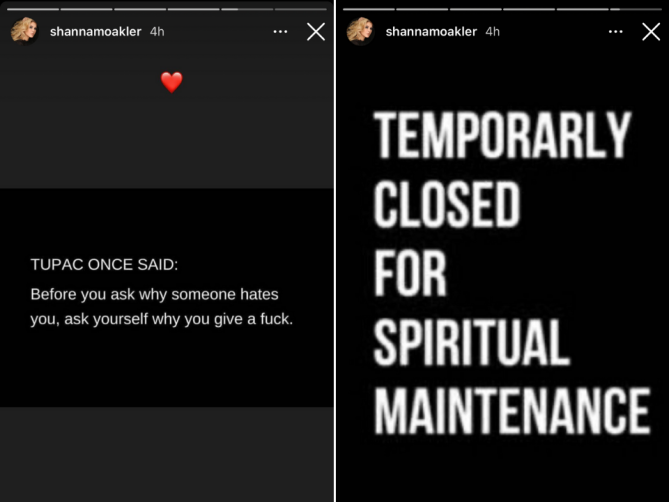 A source told People at the time that the reality star wasn’t expecting the proposal. “It was a complete surprise for Kourtney. Travis told her family that he planned to propose, but everyone was great at keeping it secret,” the insider said. “The Rosewood is their favorite for short weekend getaways. They often stay at the hotel. This is why Travis proposed there. It’s a very special place to them, but it was also easier to keep everything a secret by proposing there.”

The source continued, “It was a very romantic beach proposal at sunset. Travis took Kourtney for a walk, and you could tell that she wasn’t sure what was going on when she saw all the roses on the beach. Red and white roses were shaped into a heart. There were a lot of candles. They both looked very happy.”

This marks Kourtney’s first engagement, though she was previously in a long-term relationship with her ex Scott Disick, with whom she shares kids Mason, 11, Penelope, 9, and Reign, 6. Travis, for his part, shares kids Landon, 18, and Alabama, 15, with his ex-wife.