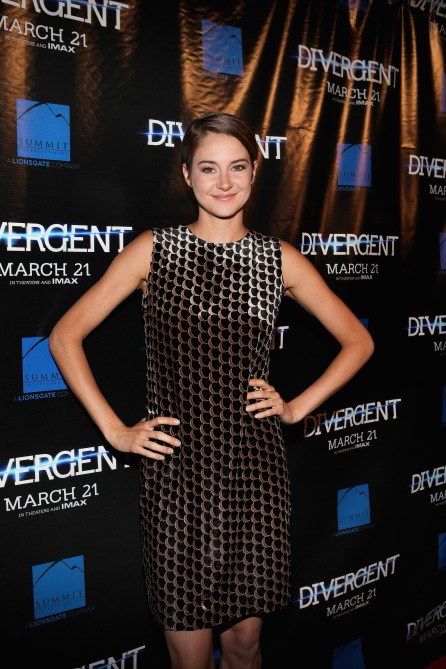 Shailene Woodley is just 22 years old, but she is well on the road to becoming a household name. The up-and-coming star has been in the Hollywood scene since the age of 8, but her Golden Globe nominated performance in “The Descendants” is what made Hollywood take notice.

Within the past year, Woodley landed starring roles in two upcoming film adaptations of wildly popular books, “Divergent” and “The Fault in Our Stars.” But she certainly isn’t letting fame get to her head. She is using the spotlight to speak out about the issues she believes in. One thing is for sure, Shailene Woodley is exactly what we’ve been waiting for in Hollywood.

Here’s a quick primer on everything you need to know about the California native who is taking over Hollywood:

1. She only shampoos her hair once a month!
According to her, “the oiler, the better.”

2. Her poop smells like metal.
After a taxi driver told her women in Africa eat clay for its health benefits, she began eating it daily.

3. She tans her vagina.
According to her it helps with yeast infections and other genital issues.

4. She worked at American Apparel until she was cast in “The Descendants.”
Woodley told Chelsea Lately in November 2012, that despite starring in “Secret Life of the American Teenager” she continued to work in retail.

5. As a teenager she was diagnosed with scoliosis
So she spent a lot of her time growing up (almost 18 hours a day!) in a back brace.

6. She was considered for the role of Katniss Everdeen in “The Hunger Games”
But Jennifer Lawrence was cast, instead.

7. She’s best friends with Megan Park
Her “The Secret Life of the American Teenager” co-star.

8. She hates “Twilight.”
In an interview with Teen Vogue, she explained, “‘Twilight,’ I’m sorry, is about a very unhealthy, toxic relationship. She falls in love with this guy and the second he leaves her, her life is over and she’s going to kill herself! What message are we sending to young people? That is not going to help this world evolve.”

9. She listens to Disney when she needs to be cheered up.
“If you listen to the lyrics, they actually have incredibly valuable lessons for human beings to learn,” Woodley told L.A. Confidential in January 2012.

10. She doesn’t own a cell phone.
“I’m not a big technology person,” she told The Daily Beast, “I’m talking to people more than I’ve ever talked to in my life because I no longer have that crutch. The more you get away from all the technological buzz, the more freedom you have.”