We’ve been waiting for Aaron Rodgers and his rumored fiancée to confirm their relationship for what feels like ages now, and well, what better confirmation than Shailene Woodley’s engagement ring photo? The Divergent actress, 29, flashed her gorgeous diamond and finally addressed her engagement to the football player, 37, during an appearance on The Tonight Show Starring Jimmy Fallon—and you can see a photo of her ring below.

Shailene and Aaron first sparked relationship rumors in early February after multiple outlets reported that the pair started dating after being friends for some time. But days later, Aaron dropped another bombshell about their relationship while he was accepting his MVP award during the NFL Honors ceremony on February 8. In his speech, the Green Bay Packers quarterback revealed that he fully got “engaged” in 2020, although he didn’t name his fiancée.

Needless to say, fans have been waiting for either Aaron or Shailene to confirm if they’re really engaged ever since. That is, until Shailene appeared as a guest on the Monday, February 22 episode of The Tonight Show Starring Jimmy Fallon, where she officially answered the public’s burning questions about her fiancé. 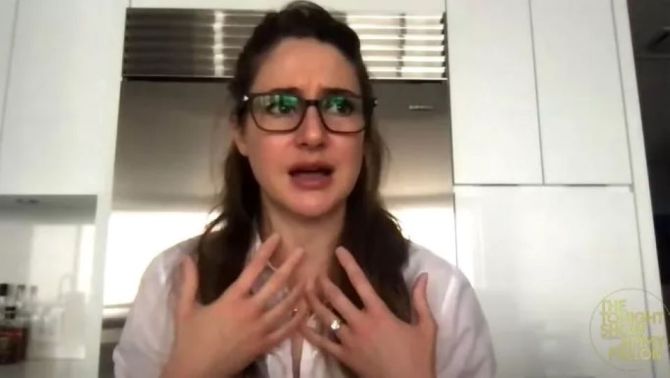 “Yes, we are engaged, we are engaged,” she said to host Jimmy Fallon. “But for us it’s not new news, you know, so it’s kind of funny. Everybody right now is freaking out over it but we’re like, ‘Yeah, we’ve been engaged for a while.'” The actress, whose new film The Mauritanian is out now, went on to admit that she doesn’t “know him as a football guy,” as she had never even seen a football game herself before dating the quarterback.  “I know him as like the nerd who wants to host Jeopardy! That’s the dude I know. He just happens to also be very good at sports.”

Fans were also able to get a quick glimpse of Shailene’s engagement ring when she flashed it on screen a couple of times. From the looks of it, the timeless ring featured a big, round-cut center diamond set on a platinum band. According to Toni Zehrer, senior vice president and chief merchandising officer at Signet Jewelers, the ring appears to be worth “in excess of $90,000.”

“This beautiful design appears to be a stunning 4 to 5-carat solitaire round-cut diamond set in platinum, ” Zehrer shared in a statement. “Depending on the quality and clarity of the center stone, we estimate the value of this to be in excess of $90,000.” Zehrer also notes that Aaron’s pick for Shailene “definitely” suits her. “Shailene composes herself with such elegance, so this classic engagement ring definitely complements her style.”