Balancing life. After Shailene Woodley and Aaron Rodgers split, the Big Little Lies actress took to Instagram to share her focus on her own mental health. The post comes a week after it was reported that Shailene and Aaron split for what may be the last time.

Sources close to the Big Little Lies actress have pointed out Shailene’s need for balance in her relationship with Aaron. “While Shailene is supportive of Aaron’s career, he put football first and they were barely spending any time together,” the insider said to In Touch. “She felt he neglected their relationship. Neither of them was happy.” 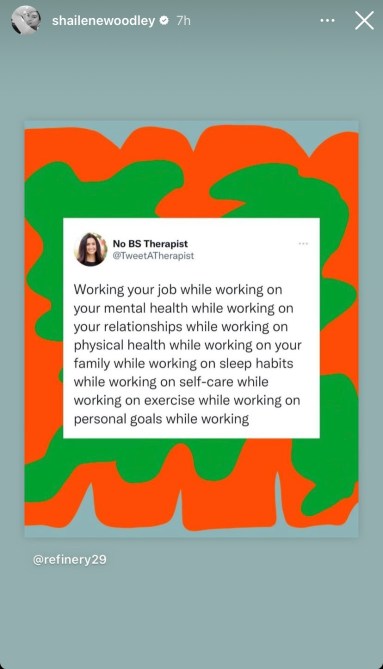 The Green Bay Packers quarterback and the Divergent actress got together at the height of the COVID-19 pandemic in 2020. The two were engaged in 2021, however it was tough to balance the working lives of the football player and the actress and the two split in February 2022. “They’re very different people with busy careers and there were obstacles that they couldn’t surmount,” a source told People at the time.

“They will remain friendly; there’s no bad blood and no drama. It just didn’t work out for them,” the insider added. Later, it was reported that the two were seen together a week after they broke up and were “rebuilding their relationship.” According to a source to E! News, Shailene decided to reunite with Aaron after breaking up in February 2022, but the plans fell short and they broke up again in April 2022. “Shailene tried to give it another shot and was spending time with Aaron,” the source said. “But she quickly saw that everything was on his terms and nothing was going to change. There was no reason to continue and she’s done with it again.”