Most of us have a go-to move that works for us in bed—something that never fails to get you off or take your partner to the finish line. It could be a position, technique, sexy phrase, or a body part that’s spectacularly sensitive. What works for one person might not work for the next, but it’s always fascinating to hear what does it for different people—whether it’s being taken off guard, dominated, or pleasured in unexpected places.

In the interest of education (and, fine, nosiness), we asked 17 guys to share the sex moves they love in bed—moves that made such an impact that they still fantasize about them to this day.

“I was seeing a girl for a few months. One day I came back from a morning jog at her place and started to do some exercises. Halfway through a set of sit-ups, she comes into the room naked and stands above me, positioned so that I would lick her every time I sat up. That evolved into a kind of hip thruster move while she was kneeling over me. Best workout ever—and a complete surprise! No words spoken; she just went and did it.” –Ryan, 29, Sydney

“I was surprised at how turned on I became when my partner gently placed her face into my neck and slowly breathed in my smell.” –Cory, 29, Austin, TX

“When I’m on the cusp of falling asleep, my girlfriend likes to spoon me from behind while I’m naked. She runs the tips of her fingers over my body while she breathes near my ear as I doze off.  She strokes my penis and plays with the head, and each time she changes her rhythm, I wake up. Rather than finishing me, she slows down and lets me drift in and out of sleep for an hour. When she finally lets me orgasm, it’s phenomenal, and she resumes running her hands all over my body until I’m asleep.” –Tim, 27, New York City 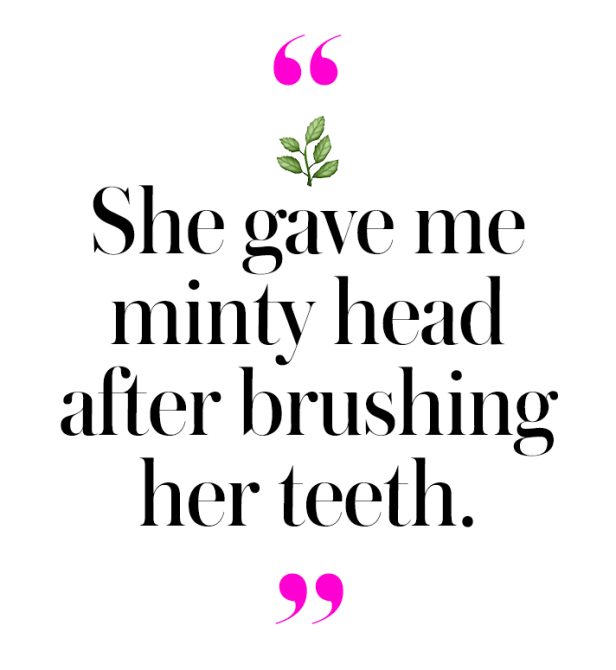 “She had just finished brushing her teeth and started to give me head. I could feel the mint from the toothpaste—it felt great. If you’re looking to try this at home, I’d recommend using milder mint flavor rather than anything strong—at least to start off. That, and it works both ways… ” –Ian, 21, Donegal, Ireland

“During foreplay, if you put some music on and back it up on me, twerk style, I’m going to really enjoy that. Same with a woman on top during cowgirl, the women that can lean forward and then bounce their ass by only popping so it goes up and down my shaft…. Yes, please!” –Sam, 29, Louisville, KY

“While making out passionately, she pushed me off randomly, slapped me in the face, and walked away for me to chase after her. Totally sexy.” –Anonymous, 24 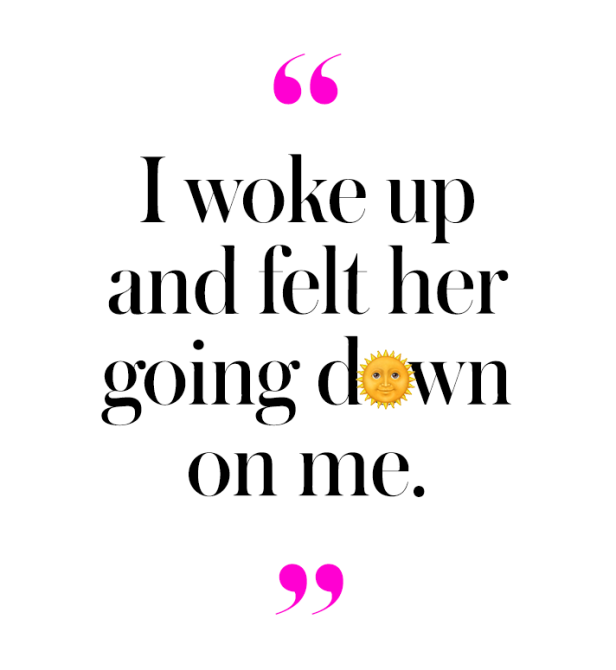 “I once got an unexpected coconut oil hand job. That was awesome! Slick enough for tons of fun. The smell turned me on, too.” –Nick, 26, Asheville, NC

“I was in the middle of a romp with a friend with benefits. I had been drinking, so it was a somewhat longer session. I was lying in bed and said, “I want to fuck your tits.” She smirked and started wrapping her tits around my dick. As hot as it was, I couldn’t help but notice that she looked slightly uncomfortable. So I asked if it’d be easier if I sat at the edge of the bed and she got on her knees. She agreed. She said, “We need lube,” and while looking straight at me, she stuck her fingers inside herself. My jaw dropped. She stroked it onto my cock as she g0t down on her knees and proceeded to titty fuck me.” –Jess, 30, North Hollywood, CA

MORE: 7 Surprising Facts About Your G-Spot 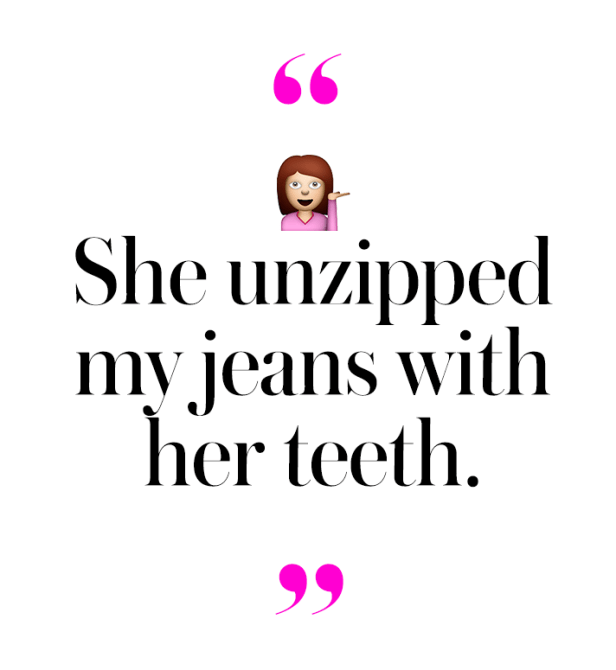 “My fiancée once pushed me back onto our bed, unbuttoned my jeans, and unzipped them with her teeth. You can probably guess what went on after that. It was the most unexpected and hottest thing a girl has done to me.” –Ethan, 32, New York City

“My last one-night stand didn’t even ask if I liked anal play—she just arbitrarily released my scrotum from her mouth in the middle of what was already an amazing blow job. Then, while maintaining eye contact, she thrust her tongue eagerly between my cheeks. I could practically hear her smile when I moaned in surprise. She got a surprise of her own, as I always shave there before a first outing with a woman. You never know, this chick might be into it, I always tell myself. I never ask for it, but on the rare occasions I don’t have to, I’m gonna be ready. I miss her sometimes…” –Andrew, 32, Dallas, TX

“She took an ice cube in her mouth and kissed me—down there. Needless to say, I was gellin’.” –Phil, 28, New York City 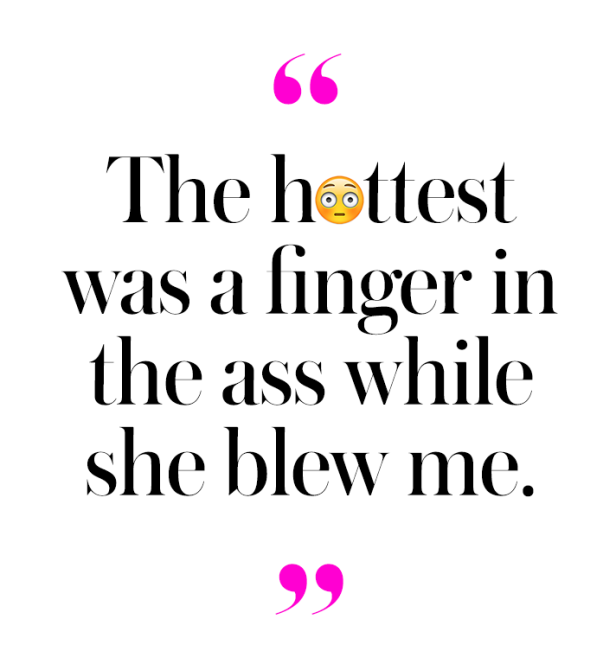 “The hottest was a finger in the ass while she blew me. She swallowed, then kept going until I came again, then swallowed again.” –Jake, 27, New York City

MORE: The Best Sex Toys and What They Do

“She rolled on top of me, pinned my arms above my head, and started kissing me aggressively. She forced my arms over my head and wiggled on top of me. I’ve never been ‘forcibly’ taken by a woman before, but that was really, really hot.” –Grant, 29, New York City

“My girlfriend does kegels—like, seriously does them. It’s nuts. She squeezes right after I climax and it’s one of the best things ever.” –Owen, 30, New York City