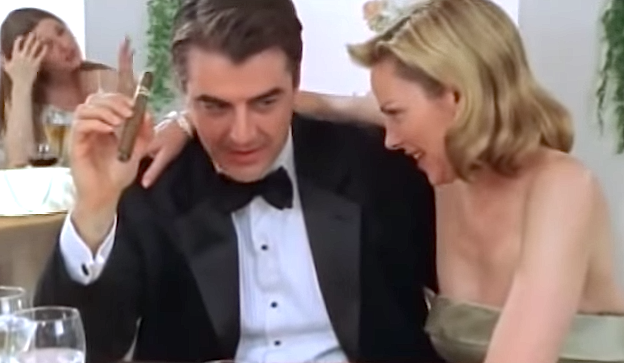 In one deleted scene, Samantha gives Big another warning about breaking Carrie’s heart.

Reason 3,546 why the Internet is awesome: Because while we were searching for a particular “Sex and the City” scene on YouTube (for editorial purposes, of course) we came across something even better: an 11-minute reel of legitimate deleted scenes from the beloved HBO show.

Not only does this gem offer never-known tidbits on characters—goody-goody Aidan lost his virginity, drunk, at 15 years old to a girl named Mary Elizabeth?!—but it also lets every SATC fanatic enjoy an extra few minutes of the show in its most authentic form (read: before the abysmal movies took over.)

The reel claims it’s only from Season 6, but don’t let the error fool you: There are plenty of nixed scenes from other seasons in there, as well.

A few things you’ll see: Carrie and Aidan having a deep in-bed conversation about what Carrie ever saw in Big; Charlotte having a breakdown to her lawyer Harry about now crazy Bunny MacDougal is; Carrie and Big sharing a smoke the night before his heart surgery; Petrovsky giving Carrie a pink Hermés scarf for her flight to Paris, and—perhaps the biggest surprise plot that never made it—Trey showing up at Samantha’s party in the Hamptons before Bobby Fine’s wedding, while Charlotte’s there with new beau Harry.

Check out the deleted scenes below, and let us know which you think should have made into in the series!