Since announcing her pregnancy in an iconic baby-bump Snapchat in April, Serena Williams has kept off the grid—well, that’s because she’s been hard at work partnering with Purple Purse, a nonprofit by the Allstate Foundation that helps domestic abuse victims acquire safety and financial security. (Oh, and she’s also preparing to be a first-time mom. No biggie.)

MORE: 7 Takeaways from Chelsea Clinton, Gabi Gregg, and Others at #BlogHer17

The professional tennis player, who spoke at the BlogHer17 Conference in Orlando on Friday, opened up about it means to help victims of domestic abuse—especially after learning that more than 99 percent of domestic abuse victims are financially abused, which is when an abuser forcibly takes control of its victims finances.

“My whole life has been really dedicated and really getting involved with helping people and helping woman and just human rights.” she says. “[Financial abuse] is really something that I think people kind of overlook. It’s an invisible form of abuse that people don’t really know about and that they don’t see. When they think of abuse they think of cuts and bruises and stuff like that.”

As an Olympic and Wimbledon champion, Williams is no stranger to winning, whether it’s on the tennis field or in the negotiation room. She encouraged women to have that same confidence and step up and take what’s theirs.

“Winning as women is really important. Women have to always go fit into this mold. I never fit into it,” she said. “I was different. I’m strong and I’m proud of it. Winning is something to be proud of. It can be at Wimbledon or it can be in your office. It can be winning that promotion. We shouldn’t be afraid for wanting to be better. We should want to be the best.” 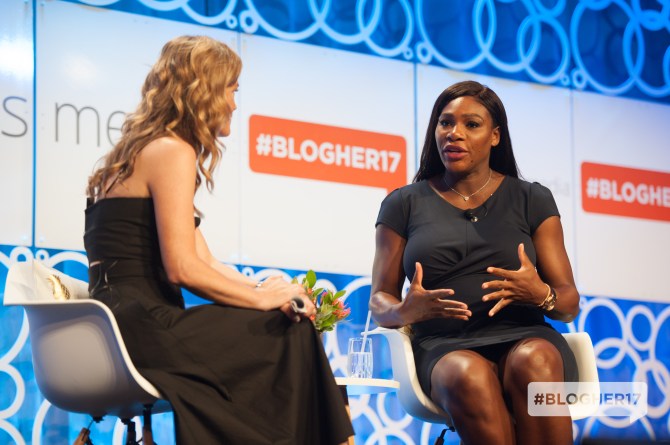 It’s likely Williams will translate that same level of empowerment to her first child, who she will welcome with fiance and Reddit co-founder, Alexis Ohanian, in the coming weeks (Months? Who knows.) But before the mom-to-be welcomes her own little one, of course she had to go to good ol’ mom for her parenting advice. What’d she learn? Well, to be confident, disciplined, and strong—as if we didn’t already know strength ran in the Williams family.

“My mom has always been so strong for me. She’s been the woman that is literally unbreakable,” she said. “When you’re young and you’re growing up you think you’re parents were strict. Then you’re older and you ask if they could have been stricter and you really start to appreciate that. When you start a family yourself, it opens up a lot of things in your mind.”

That’s when Williams made us all feel a special something by revealing that she hopes to emulate her mom’s mothering for her own child.

“I feel like all those lessons she taught me of being so strong, proud of who I am, being able to look anyone in the face and have confidence and speak with so much confidence is something I really have been able to embrace and I’d love to teach my child that,” she said.

Keep on winning, Serena. We know we will.